Commentary: Officials crisis is just not a local issue 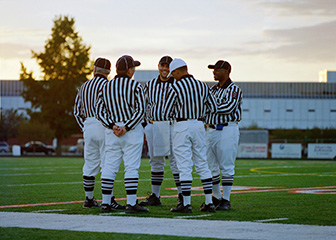 There is a crisis happening in High School sports not only in Washington State but across the country and that is the pool of officials to call games is diminishing at an alarming rate. There are many wants in High School sports all to try and create the best student-athlete experience as possible but there are needs that must be addressed before any of the wants. Without officials there are no games, no tournaments, no nothing.

To emphasize this critical shortage the South Sound Football Officials Association did not have enough varsity referees to cover all the home games in their area if they all played on a Friday night. We were told if they were short there would be a blind draw of the games that would get to play on Friday and those left out would have to re-schedule for Thursday or Saturday.

This also created problems because schools also had soccer games to schedule around and several stadiums had leased out their facilities to other groups like youth football. One week the Association got bailed out and were able to cover a game because of a visiting official from Moses Lake was in town and agreed to work a game.

Talking with officials there are a couple of issues that seemingly could be addressed with more communication and the Officials Associations doing a better job of recruiting new officials. The 1st thing to attract new people into officiating is to make it attractive.

The first question new recruits ask is how much does it pay? The old saying is you’re not going to get rich officiating high school sports is certainly accurate but there is an opportunity to make more than $20 per hour depending on the sport. Most varsity officials make between $40-$65 dollars per game. Now depending on the sport determines how much you make per hour.

For example, football is the most time consuming and therefore is where you will make the lowest per hour. For varsity games, officials must report an hour and a half prior to kick-off. We’re told the reason is you’re working with a 5-man crew and not the same crew game after game. During this prep time the Crew Chief reviews all situations with his crew to make sure they are as prepared as possible for any of the hundreds of potential situations they will face. Then there is the actual time of the length of the game which can vary from 90-minutes to 3 and half hours. Football ironically is the most popular but also is the sport you will make the least on a per hour basis.

The flipside is a sport like basketball where there are only 3 officials, you are there maybe an hour at most prior to the game, many times depending on how long the JV game goes and then you and your partners may chat a bit prior to the game before reporting to the floor with about 15-minutes to go before tip-off. The game is only 32-minutes and halftime is just 10 minutes, many times not even the full 10 minutes is used. Total time rarely goes 2 hours or more and usually done in the 90-minute range. Additionally, many officials not only do multiple games weekly but many do them daily going from an afternoon middle school game to an evening high school contest.

The other major issue it appears is the initial cost for new officials. Each sport has uniforms and gear that new officials must purchase and it’s not cheap. An officials starter kit for football is a minimum $250. Plus each association pays their officials differently including 1 check after the season is over. So to get new officials to commit they have to come up with money to pay for their uniform, training and dues to the state Association (the WOA) and then you commit time and money to do the games and wait to get paid and reimbursed.

We were told once you get someone through the 1st year there is a high rate that stay but its the initial cost and training that is a huge deterrent in attracting new recruits to commit to officiating. It also appears to be a huge deterrent to attracting younger people who may be in college to officiate as a way to make money for their schooling.

We think colleges and community colleges would be a huge opportunity to fill the bottom level officiating numbers. This is a great demographic to approach to do the middle school games that are 99% in the mid-afternoon along with Freshman and C-Team games and youth sports many times on weekends. But the upfront commitment is simply too much. There has to be a way to cut the costs and make it attractive for young people to get in the officiating game.

The old stat remains true to this day that less than 10% of all of those playing High School sports will go on to play any level of college sports, the NCAA reports only 6% of High Schoolers will play at the NCAA level. This means there are tons of young men and women that are still in great shape, have played the games they would be officiating and most likely in need of at least part time income. But there is little chance of them getting involved with such a financial commitment up front.

There has to be a way to figure out how to lessen the impact on new recruits upfront to make it easier to get involved, this is on the Officials Associations both local and state. We know there was a program in place with the South Sound Officials Association but due to increases in other fees they had to stop the program. That program we’re told was hugely successful in attracting and retaining officials.

Another issue that we have heard is some schools or leagues are moving up start times for their C-Team and JV games causing more pressure on officials. Many times officials that work middle school games would have enough time to get from the middle school to the High School to do those games and no longer can do so. This results in more varsity officials calling JV games.

These are issues we think can and should be addressed by the associations, WIAA and districts. There has to be a way to limit the impact of these issues with built in programs and more communication.

Another huge reason that the pool of officials to call games is diminishing is the attitude and behavior of some players, coaches and fans. A commentary from the Colorado High School Athletics Association (CHSAA) or the same as our own WIAA talks about the increase in verbal and sometimes physical abuse of high school officials. Here is the link to this story but you should be warned vulgar language is included in this piece. The language are direct quotes from officials game reports in Colorado. When talking with officials in our area they all agree they have heard the same and its increasing.

The conclusion to this issue and it is quickly becoming an emergency is simple, if there are not enough officials then games and opportunities for kids to play are cut. So the next time you feel like unloading on a C-team official or any official for that matter because they missed a traveling call ask yourself these 2 questions:

There are no leagues or schools that will risk the liability with untrained officials so if you think they can just grab someone from the stands you would be incorrect.

This is going to continue to be a huge problem in all sports. We believe the 1st step in solving this problem is remembering those earlier stats, only 10% of ALL high school athletes will go on to play at any level of college sports meaning that 90% of all athletes in organized sports top out in High School. So maybe focusing on the positive, focusing on accomplishment and the fundamentals of what sports is supposed to teach kids is where we start. Maybe start appreciating and thanking many of these officials is in line, although none that we know are asking for such a gesture.

The biggest gesture and compliment you can give an official is too understand not one of them wakes up in the morning scheming on how to screw over a 9th grade football game or who they are going to target in a JV basketball game. Understand they are going to make mistakes and screaming obscenities at them really isn’t going to make them a better official. Understand most times an official that misses a call already knows they did and working on not repeating it. Understand and teach your kids and athletes that not everything goes your way, not everyone feels like rewarding you for simply doing what everyone else is doing and learn to identify and then deal, scheme and make adjustments to all challenges including an official not calling a game the way you’d like it to be called. The old cliche that you bought your ticket gives you the right to do anything you want is simply not true. A $5 investment to watch high school sports does not give you a license to be a jackass.

The final solution should be simple, better fan behavior, coaches that teach dealing with difficult officiating situations and officials associations, the WOA and the WIAA all coming together to figure out how to attract, cut the initial cost for new officials and retaining those officials. We encourage anyone wanting to give officiating a try to contact your local association and if you don’t know what that is any Athletic Director at any of your local High Schools can help you with that information. There is a huge need in all sports, football, soccer, volleyball, basketball, wrestling, baseball and fastpitch. We hope we can see progress on all levels before this crisis becomes a disaster.