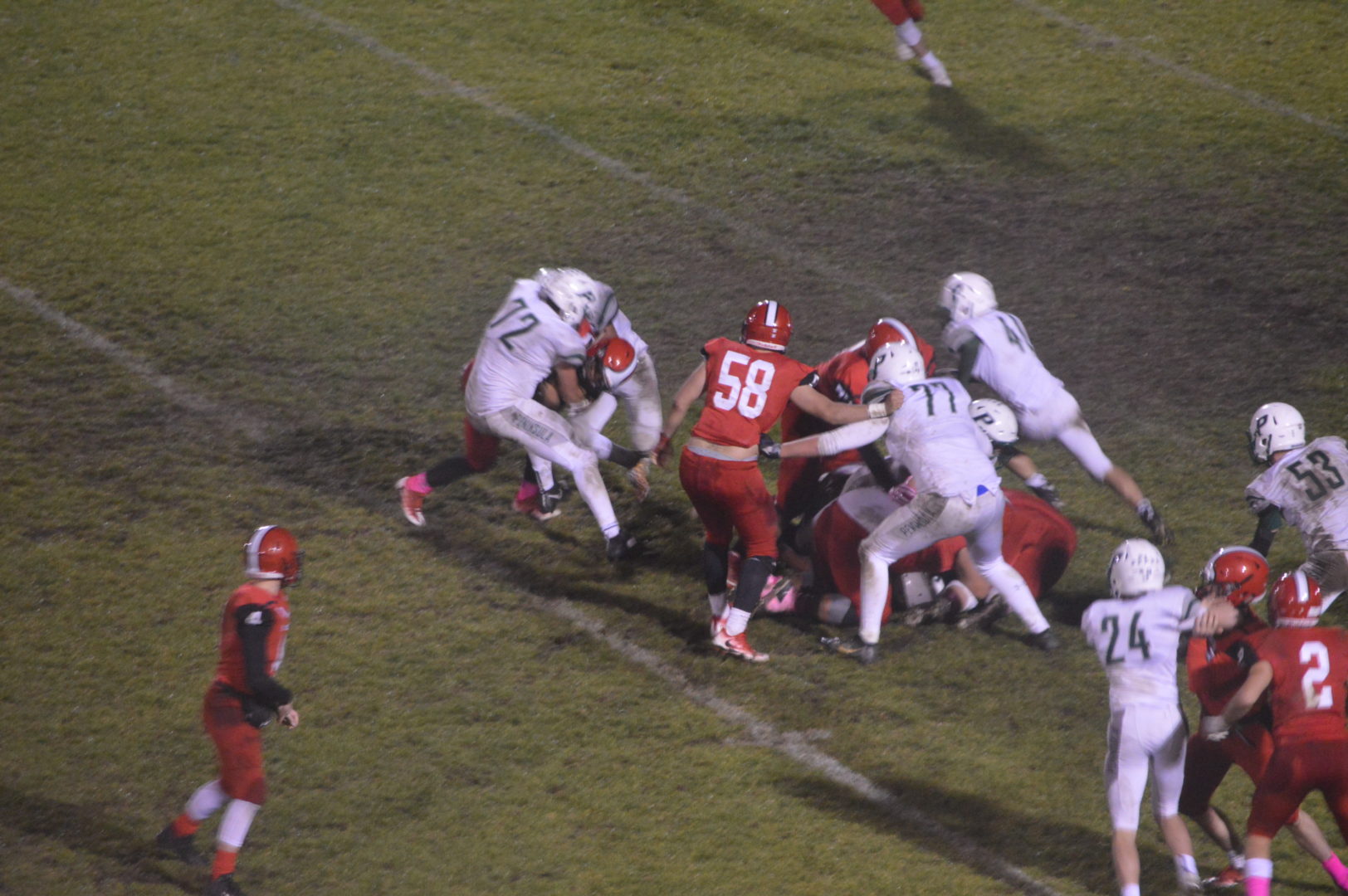 (Yelm, WA) After getting stunned with a shut out loss last week at Central Kitsap the Peninsula Seahawks made sure there would not be back-to-back scoreless nights on the opening drive of the game. The Seahawks drove 68 yards and capped the drive with a 5-yard surge from Braeden Potter. Ben Stanford added the PAT and it was 7-0.

Yelm then got their 1st chance with the ball taking over on their own 35. The Tornados were ready to fire right back and marched down the field with big runs from James Palmer and QB Kyle Robinson. Yelm drove it down to the 3 where the Seahawk defense stiffened and held them to a 4th and goal from the 3. Yelm Coach Jason Ronquillo sent in his field unit but the Seahawks blocked to deny the Tornados. Yelm caught a break as Ozzy Marten scooped the blocked kick up and went about 95 yards for the touchdown. But a clear block in the back near mid-field took the score off the board and to add to the frustration the illegal black came about 15 yards behind Marten and had no impact on his runback but the end result still kept the Tornados scoreless.

Yelm would get on the board early in the 2nd quarter with an impressive 80-yard drive. The key play on the drive was a 13-yard pass play from Robinson to Kodee Gifford down to the 10-yard line. Robinson would finish off the drive with a 1-yard plunge but the Seahawks would not give up the lead as Mason Hyde stepped through the middle of the line and blocked the PAT as Peninsula held a 7-6 lead.

The Seahawks then countered with a huge kick-off return by Michael Foreman all the way down to the 15 of Yelm. Potter would plow in for the final few yards and the extra point made it an 8-point Seahawk lead.

That would be the halftime score but there was plenty of action before the break that impacted both teams but Yelm definitely came out as the bigger loser. On a low snap that got away from Robinson he scrambled after the loose ball and in the pile-up left the game with a severe leg injury. ESN was told after the game the Yelm starting QB suffered a high ankle sprain and is likely done for the season.

Peninsula also lost a player for the rest of the game when Foreman was ejected for apparently throwing a punch as the game’s chippiness picked up with so much on the line. Both teams came in at 4-1 and tied for 2nd and this was a must win for a shot at the league title.

The 2nd half ended up being completely opposite of what many thought this game would be a shoot-out and turned into a run and grind affair. Yelm had to insert sophomore Benjamin Hoffman at QB and Peninsula knew the Tornados would likely go conservative being down just 1 score and they would try to shorten the game limiting the number of opportunities Yelm would have to tie the game.

Late in the 3rd quarter the Seahawks would take advantage of a big interception from Tanner McKinney the first of two for McKinney. McKinney returned the ball 35 yards to the Yelm 45 and a QB Burke Griffin would finish off the drive with a 1-yard plunge behind the big boys up front of Carl Wiberg, Graham Schmidt, Khalif Spry, Mason Hyde and Riley Rivera.  The PAT was no good but the Seahawks led by 14 and was too much for the limited Yelm offense to overcome.

Our Pacific Sports Spa Players of the Game went to Peninsula’s Burke Griffin and Yelm’s middle linebacker Derrick Platt who had another productive game in the middle including a sack and making one of the most incredible tackles we have ever seen, or at least an assist when he pushed his team mate, Austin Osso into the Seahawk’s Cameron McDonald knocking them both down while McDonald tried to turn the corner.

Peninsula will host Timberline next week with the League Title on the line and the #1 seed into the crossovers on the line. Yelm will host Central Kitsap with 3rd place up for grabs. If Yelm loses the worst they can finish is in a tie with Gig Harbor for 4th but the Tornados hold the tiebreaker on their 21-17 win earlier this season. Yelm is trying to advance to the State Tournament for the first time in 30 years.