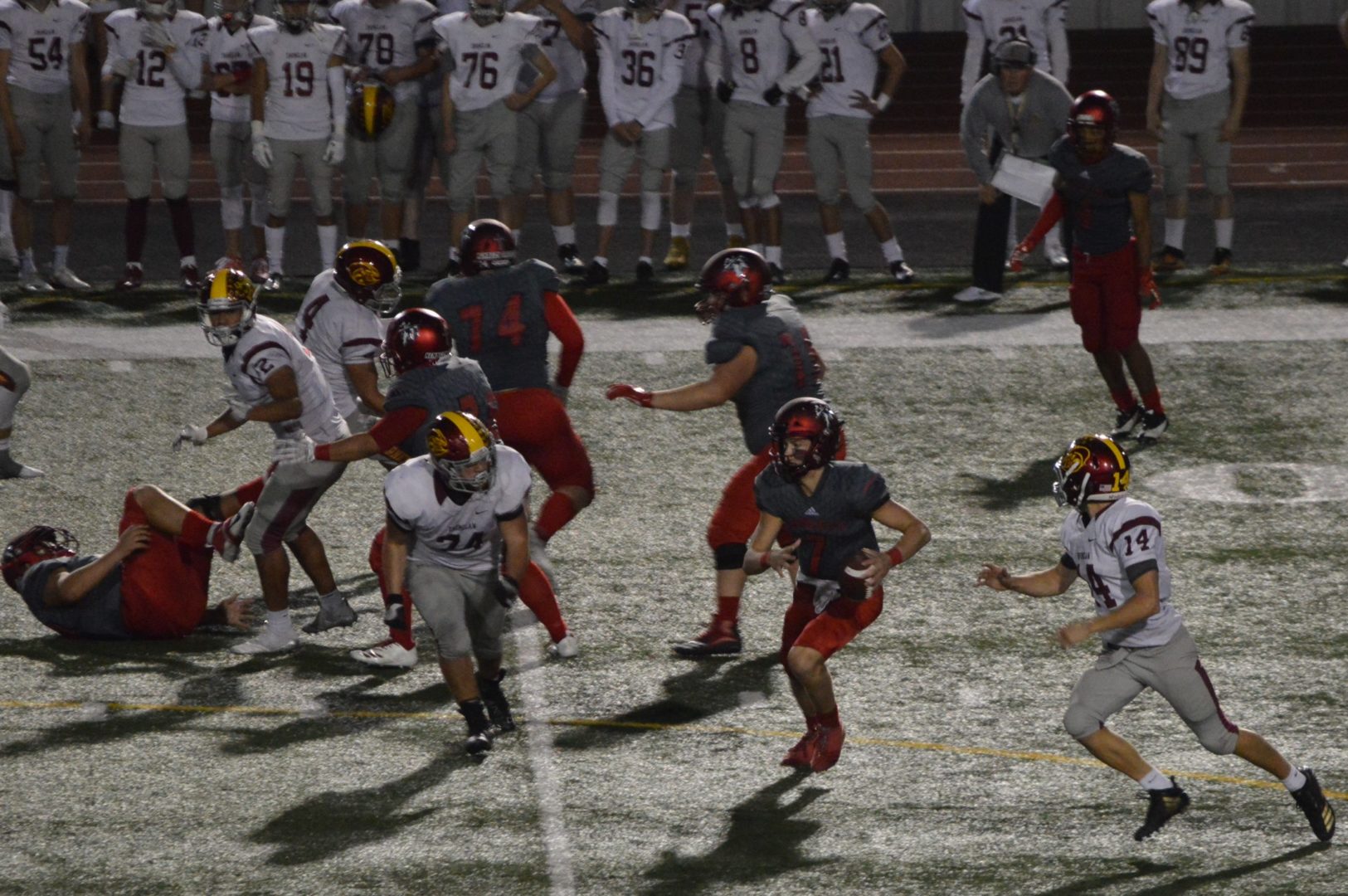 (Burien, WA) The Enumclaw Hornets finished the game with more than 500 yards of offense and midway through the 2nd quarter they had no points and about 30 yards of offense. For the final 28:30 of the game the Hornets would gain a yard every 3 seconds and a point every 30-seconds. The Lancers led by sophomore QB Sam Huard and his usual stable of top receivers came out slinging and would end up with more than 500 yards passing themselves and the 2 teams would combine for nearly 1,200 yards of offense and 105 points.

Kennedy sprinted out to a 13-0 lead with the usual number of pass plays but in the end Jahvius Leui plowed in from the 1, Michael Snyder added the PAT and it was 7-0. The 2 teams would exchange possessions and the next time the Lancers scored was a brilliant 95-yard drive in just 1:24 and capped with a 54-yard screen pass from Huard to Jabez Tinae but the PAT failed and it was 13-0 with 6:48 to play in the half.

The Hornets had about 30 total yards of offense at this point but began to find their groove on this next possession with a big dose of running the ball. They did this by changing up the backs going with smaller backs beginning with Matthew Dion who hit the line fast and hard and in some cases underneath the defensive surge and he popped for the final 14 yards on this drive for the score, Fulton Gunderson added the PAT and it was 13-7.  After Ethan Eilertson intercepted Huard for the 2nd time in the 1st half they took over on their own 40. Once again the big running attack paid off this time on his 1st carry Jackson McCann burst right up the middle for a 35-yard sprint to paydirt and Enumclaw took a 14-13 lead with 2:47 to play in the half. Again, 2:47 left to play and it was 14-13…the halftime score was 28-21 so 21 more points were still yet to be scored.

Kennedy answered in exactly 10-seconds on the next play from scrimmage from their own 31 when Huard hit Justin Baker in stride over the middle and he was gone 69-yards to make it 19-14 and they went for 2 and converted with a pass to Zane Thornton and it was 21-14 at the 2:32 mark.

Enumclaw took 42-seconds to tie it when McCann on his 2nd carry of the night dashed 46 yards up the gut for his 2nd TD and we’re all square at 21. The Lancers got the ball back with 1:38 to play and they would get it back 2 more times…and so would the Hornets!! On this drive they began on their own 27 when Huard hit Junior Alexander who ran off 34 yards but fumbled the ball and Enumclaw’s Eilertson recovered for his 3rd take-away of the half. But they couldn’t move the ball and punted with :52 to play. The Lancers Huard uncharacteristically threw a 3rd interception matching his season total in the 1st half this time to Kale Engebretson who returned it to the 25. A 10-yard penalty moved the ball to the Kennedy 15 and on his 3rd carry of the 1st half Jackson McCann blasted straight ahead into the endzone to give Enumclaw a 28-21 halftime lead. It was McCann’s 3rd carry and 3rd TD and finished with 96 yards and 3 TD’s for the 1st half. Kennedy did get the ball back one more time with 18-seconds to go which proved to be more than enough time but this time they stalled and that was the halftime score.

Enumclaw received the 2nd half kick and picked up where they left off as they would reel off 2 more touchdowns to double up Kennedy 42-21. On the 1st drive QB Kellen Kranc got into the act with a beautiful pass to Bryson Engebretsen on a 31-yard connection. On the 4th straight unanswered TD starting RB Nicholas Harberts started to break it open and capped the 63-yard drive with a 3-yard plunge and it was 42-21 with 4:32 to play in the 3rd quarter.

The Lancers offense then began to fire on all cylinders again as they came roaring back with 3 straight touchdowns to tie the game at 42 with 6:28 to play in the game. They got the comeback started when Huard hit Tinae for a 22-yard strike. After turning it over on downs near midfield the Lancers capped off this TD with a 15-yard run by Tinae and it was 42-35. The Lancer defense then stepped up when Riley Maroni picked Kranc and returned it 30-yards to the Enumclaw 32. Kennedy then went to the running game to finish off this drive to tie the game when Jordan Jackson surged in from the 4 and with 6:28 to play it was a new game 42-42.

The Hornets then got back on track and took over on their own 42 and capped the 58-yard drive with a 7 yard dive play to fullback Kameron McKee and it was 49-42. Kennedy took the ball with 4:23 to play and went on a 3+ minute drive finishing with Jackson plowing in from the 1 for his 2nd TD and pulling the Lancers within 1. Head Coach Sheldon Cross is a risk taker and wasn’t in the mood to extend the game so went for 2 and the lead. Huard dropped back and flung it to Junior Alexander who got his hands on it but a great defensive play strip the ball away and the PAT failed with less than a minute to play.

It wasn’t over yet as the Lancers tried an on-sides kick the rolling ball kick-up right in front of the Hornets Anthony Russell who grabbed the loose ball in stride and was gone 48 yards to the endzone but Head Coach Mark Gunderson looked at the scoreboard and knew the game was far from over with 40-seconds still left and they led by 7. He knew kicking the PAT would leave it a 1-score 8-point game so he went for 2. They converted the 2-point play and led by 9 57-48 and that was indeed the final blow to put the game away.

Enumclaw is now 5-0 and more importantly 2-0 in NPSL play, the Lancers fall to 3-2 and 1-1. Our ESN players of the game went to Jackson McCann for the Hornets and Jabez Tinae for the Lancers.