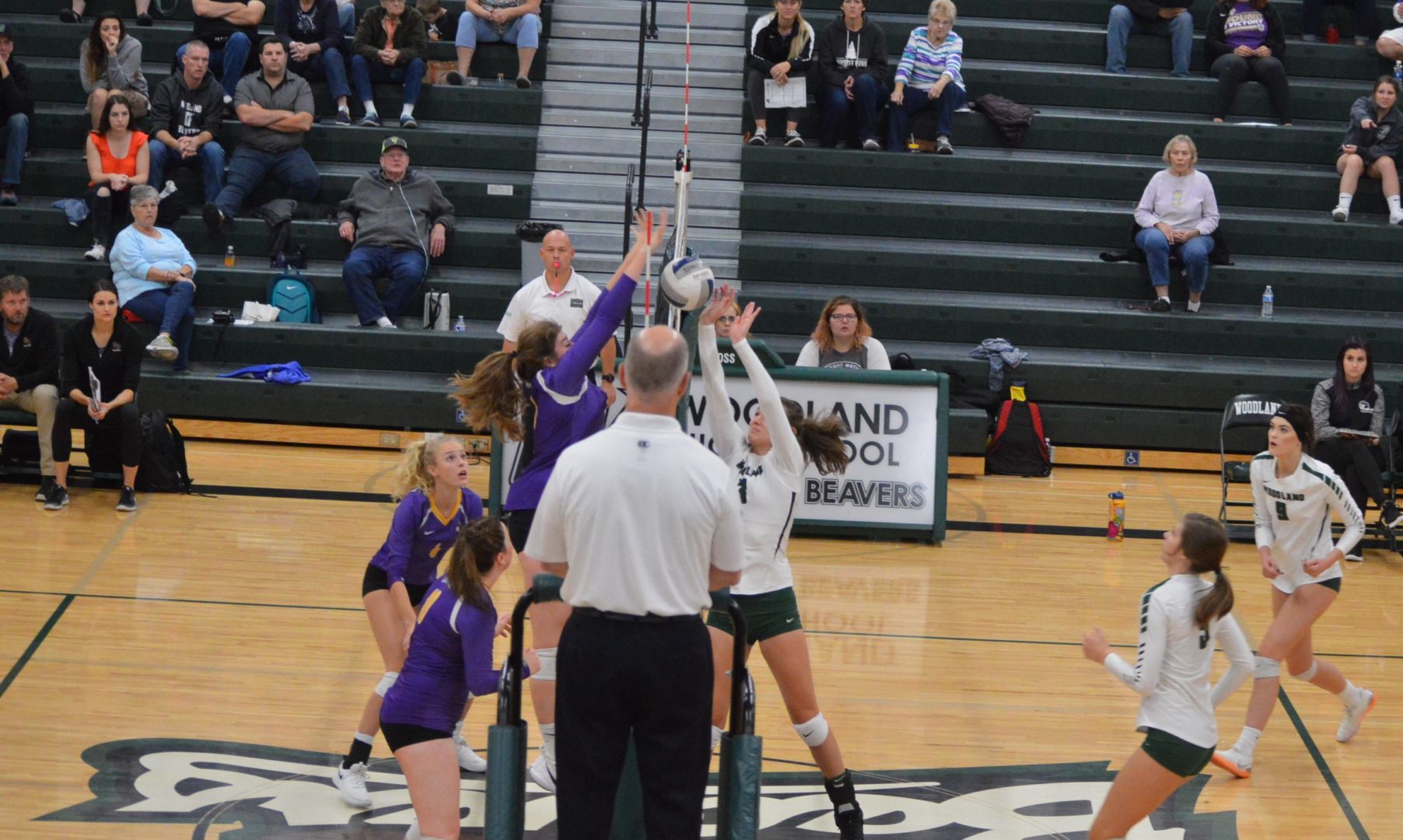 (Woodland, WA) The Woodland Beavers and the Columbia River Chieftains came into the is match battling for 2nd place with the Beavers at 6-2 and the Chieftains at 5-2. Woodland had already beaten CR in their first match-up at CR 3-1.

Woodland immediately took control of the 1st set with Olivia Andersen serving knocking down 4 straight for a 4-0 lead. The Chieftains would get back in the match early trailing 7-6 but then the Beavers simply pulled away. Peyton Foster pushed the lead back to 11-8 with 3 points followed by Elyse Booker with 3 pushing the lead to 6 15-9. The Beavers got great net play from Taylor Foster and Nicole Guthrie and rolled to an easy 25-16 win.

Andersen took the momentum from the 1st set and kept it rolling firing off 7 straight points for a 7-0 lead and it looked like the  2nd set was already over. But it appeared the Beavers then relaxed a little too much getting sloppy with unforced  errors  and trying to get too precise with their returns.

Meantime, the Chieftains were not about to get blown out again and Sydney Waite began  to chip away at the deficit with her turn at the service line with 3 points and was 8-4 when she got done. Hallie Worden and Lexi Williams each had 3 points and they were forcing the Beavers into turning the ball over without scoring and they eventually caught up and tied the match at 17. The 2 teams would ding-dong back and forth until CR had a chance to take the set with a 25-23 lead. Two set points but Woodland was able to push  it to over time with Taylor Foster destroying  the ball scoring huge kill shots. Foster took the serve at 27-26 and fired to winning serves to take a huge set from  the Chieftains.

The heartbreaking loss took its toll on CR as once again Andersen gave the Beavers another lead 3-0. Combined Andersen scored 14 points leading off each set. CR would never get closer than 3 points as the Beavers just kept adding to their lead. Booker pushed the lead to 23-17 and they traded points with the match winner and unforced net serve to give the Beavers the 3-0 sweep.

Woodland is not 7-2 and completed the season sweep of CR and will have to totally collapse against teams they’ve already beaten to get knocked out of 2nd place. CR is now 5-3. Our ESN Players of the Game for the Woodland Beavers Olivia Andersen and for the CR Chieftains Emma Adams.