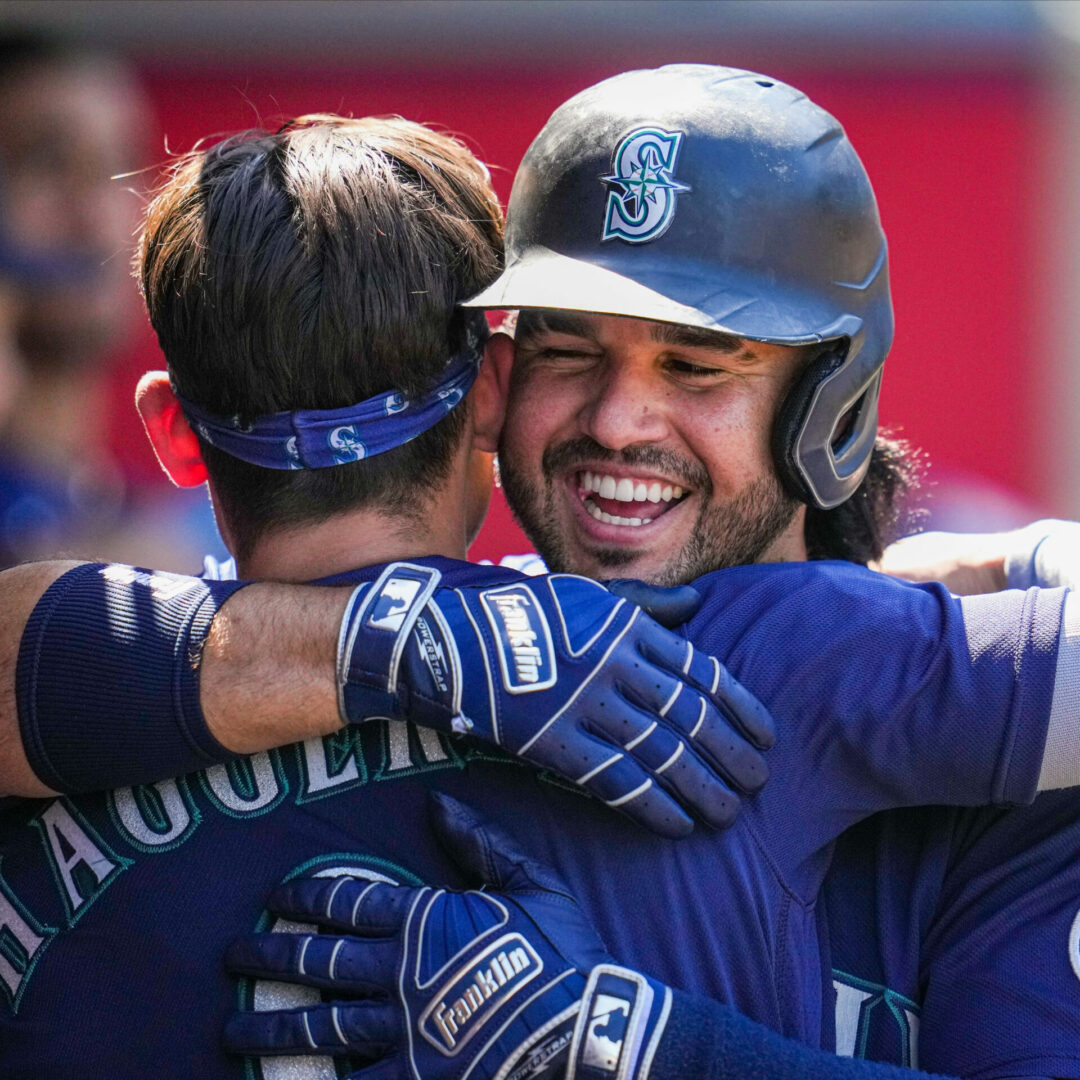 (Anaheim, CA) The finale of the Mariners three-game set with the Los Angeles Angels wasn’t quite as dramatic or wild as the first two games of the series. They did however take care of business by building a big lead and then coasting the rest of the way to complete the sweep and head into an off day with a lot of momentum.

The scoring wouldn’t start until the 3rd inning in the YouTube exclusive game. Sam Haggerty was hit by a pitch, and Adam Frazier and Jesse Winker would draw walks to load the bases with one out against Angels starter Touki Toussaint. Mitch Haniger would hit a missile into left field that would move everybody station to station while scoring Haggerty to give Seattle the 1-0 lead. Eugenio Suarez would then strikeout for out number two, but J.P. Crawford would control the strike zone and draw a bases loaded walk to make it 2-0. It would be Carlos Santana delivering the big hit of the inning with a base hit to right to score Winker and Haniger. That would end Toussaint’s day after just 2.2 innings and with the Mariners leading 4-0.

The Angels would get one back in the bottom of the 3rd off of rookie George Kirby. After a single and stolen base by Andrew Velasquez, David Fletcher would get a base hit to right. Velasquez would score easily and the Angels were on the board but still trailing 4-1.

Seattle would add on in the 5th. A leadoff single by Mitch Haniger brought up Eugenio Suarez. Suarez would launch a 1-0 fastball out of the park to center field for his 20th home run of the season. Cal Raleigh would join the party a few batters later as he would launch a solo shot off the scoreboard in right. Raleigh’s 17th home run of the year coupled with Suarez’s shot had the Mariners up 7-1.

The Angels would again answer in the bottom half of the inning. With runners on first and second with two outs, two-way star Shohei Ohtani would line a base hit to center field to score Magneuris Sierra from second. Luis Rengifo would then hit a double down the left field line to score Fletcher and cut the Mariner lead to 7-3.

The lead would grow back the next inning. In the top of the 6th, Jesse Winker would celebrate his birthday with a two-run shot to right field and broke the sign in right cause he hit it so hard. It was Winker’s 13th of the year and put the Mariners back up by six at 9-3.

Los Angeles showed a lot of fight and weren’t going to just roll over. A leadoff single by David Fletcher in the bottom of the 7th put a runner on for Ohtani. The Japanese born superstar would show off his wheels as he laced one into the right field corner. Fletcher would score easily from first as Ohtani recorded his fifth triple of the season. Taylor Ward would hit a sacrifice fly to Sam Haggerty in left to score Ohtani and narrow the gap at 9-5.

A response in the 9th for the Mariners put a stamp on what would be a sweep of the Angels. With J.P. Crawford on first, Cal Raleigh would hit a massive blast to right field for his second home run of the game and his 18th of the season. The Mariners were in double figures with an 11-5 lead.

Matt Festa would finish the job in the bottom of the 9th for Seattle. After a two-run home run for Ohtani made it 11-7, Festa would strike out Jose Rojas and get Taylor Ward to fly out to Rodriguez in center to complete the sweep and get the Mariners back on track.

A very nice series for Seattle (65-54) put them a game and a half ahead of Toronto and Tampa Bay in the Wild Card standings headed into a day off. The Angels (51-67) will also have Thursday off and travel to Detroit for a three-game series with the Tigers. Patrick Sandoval (3-8, 3.42 ERA) gets the start in game one for the Angels as he squares off against Matt Manning (0-0, 3.24 ERA) for the Tigers. The Mariners will wrap up their nine-game road trip as they start a three-game set with the last place Oakland Athletics on Friday at 6:40p. It will be Marco Gonzales (7-12, 4.18 ERA) opening the series for the Mariners against Cole Irvin (6-10, 3.13 ERA) for Oakland.

This series was massive for the Mariners. All the talk about the schedule getting easier was reminiscent of last year and Seattle struggled to put away those weaker teams. This road trip started the same way after losing two of three in Arlington to the Rangers. To get back to their winning ways and sweeping the Angels puts the M’s right back on track. And the fact that the offense was able to explode and score plenty of runs in the series as well is a fantastic sight. With the way this pitching staff is going, it won’t take much offense to win ballgames but if the bats get hot this team is tough to beat. The offense will need to be on point because the Mariners are going to see the three best, healthy pitchers that the A’s have to offer.