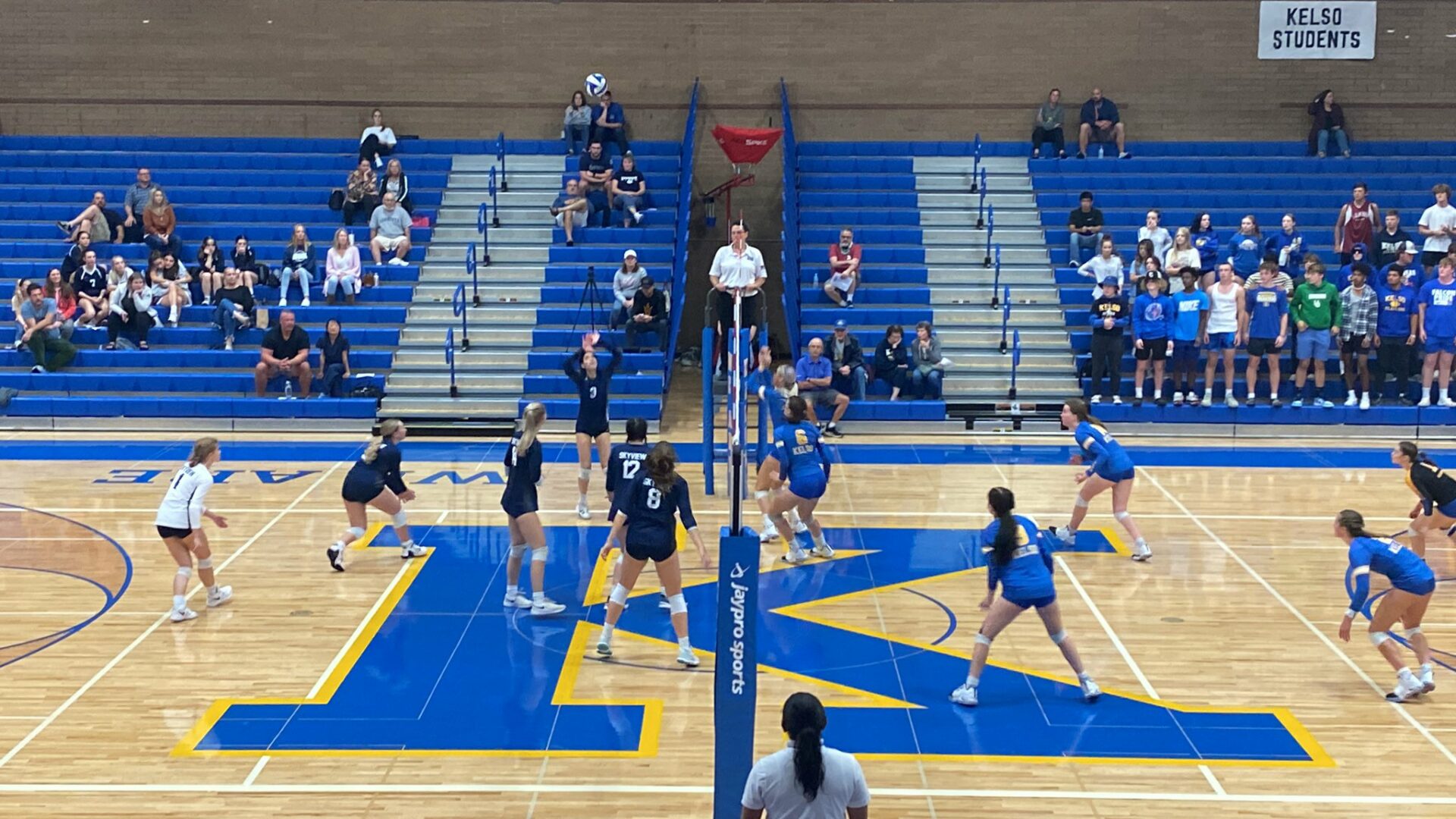 (Kelso, WA) The Kelso Hilanders and Skyview Storm took the court opposite one another for the third time this season. Kelso swept the first regular season matchup 3-0 and then defeated the Storm in a weekend tournament 2-1. Skyview had a lot of momentum on their side going into the Thursday night showdown and had been consistently improving every match. Meanwhile, Kelso was on an 18-set win streak since their only loss this season to Prairie. While Skyview made them work, Kelso would extend that to 21 straight set victories as they swept the Storm once again.

The Hilanders pulled away with the first set early. Ruby Sereday caught fire from the service line with five consecutive points served for Kelso as they went up 8-2. Presley Nippert rolled right along for Kelso dominating at the net for Kelso despite Skyview’s duo of Madi Wallman and Lauren Davis blocking quite a few kill attempts. Three more points for Kelso were served by all-around player Rielee Gourde. Natalie Bair added a couple more and Kelso later finished off the first set 25-17.

Set number two was closer but Annalee Johnson gave Kelso the slight advantage after a couple of points served. Presley Nippert continued to be very impressive but got a lot more help at the net from Lucy Hight and Olivia Chilton. Skyview would get back in it with two points served by both Angela Olson and Lauren Harris to take a 16-14 lead. Trailing 18-16, Kelso found another gear. Emily Thompson served an ace as part of her three consecutive points for the Hilanders and two more including an ace by Johnson put Kelso up 23-19. Skyview answered after getting the serve back as Annie Hite served three straight points as the Storm evened it up at 23-23. Kelso would earn the next two points to fend off the late charge to take the set 25-23.

The third set was more like the second. The two squads pretty much traded points early as Kelso led 8-6. Annie Hite then took over serving four straight points with Alina Shawgo catching fire at the net and Lauren Harris continuing her great match. Angela Olson was flying around on the backline for the Storm and they built a 10-8 lead. Kelso then had three straight servers serve two points for them in Annalee Johnson, Natalie Bair, and Ruby Sereday. Kelso led 17-13 at that point and a big Presley Nippert kill later in the set made it 24-18 after three consecutive points served by Johnson. Like the two previous sets, Skyview went on a late run. Valerie Brenes was rolling from the service line and Lauren Davis was dominating up front. Kelso’s lead was cut to 24-22. That would be as close as Skyview got as Kelso finished off the sweep winning the final set 25-22.

Our MVP of the match was Presley Nippert with a match high 18 kills and they were all extremely impressive. The lefty was doing it on both sides of the net and everyone knew when she went up at the net that something special was about to happen. Lauren Harris was very good for Skyview and Angela Olson was incredible on the backline for the Storm as well.

With the win, Kelso moves to 8-1 and they look to keep things rolling on Thursday against Union. Skyview drops to 5-5 and they will try to bounce back on Monday at home against Heritage.

Kelso Pulls Away in Set #1