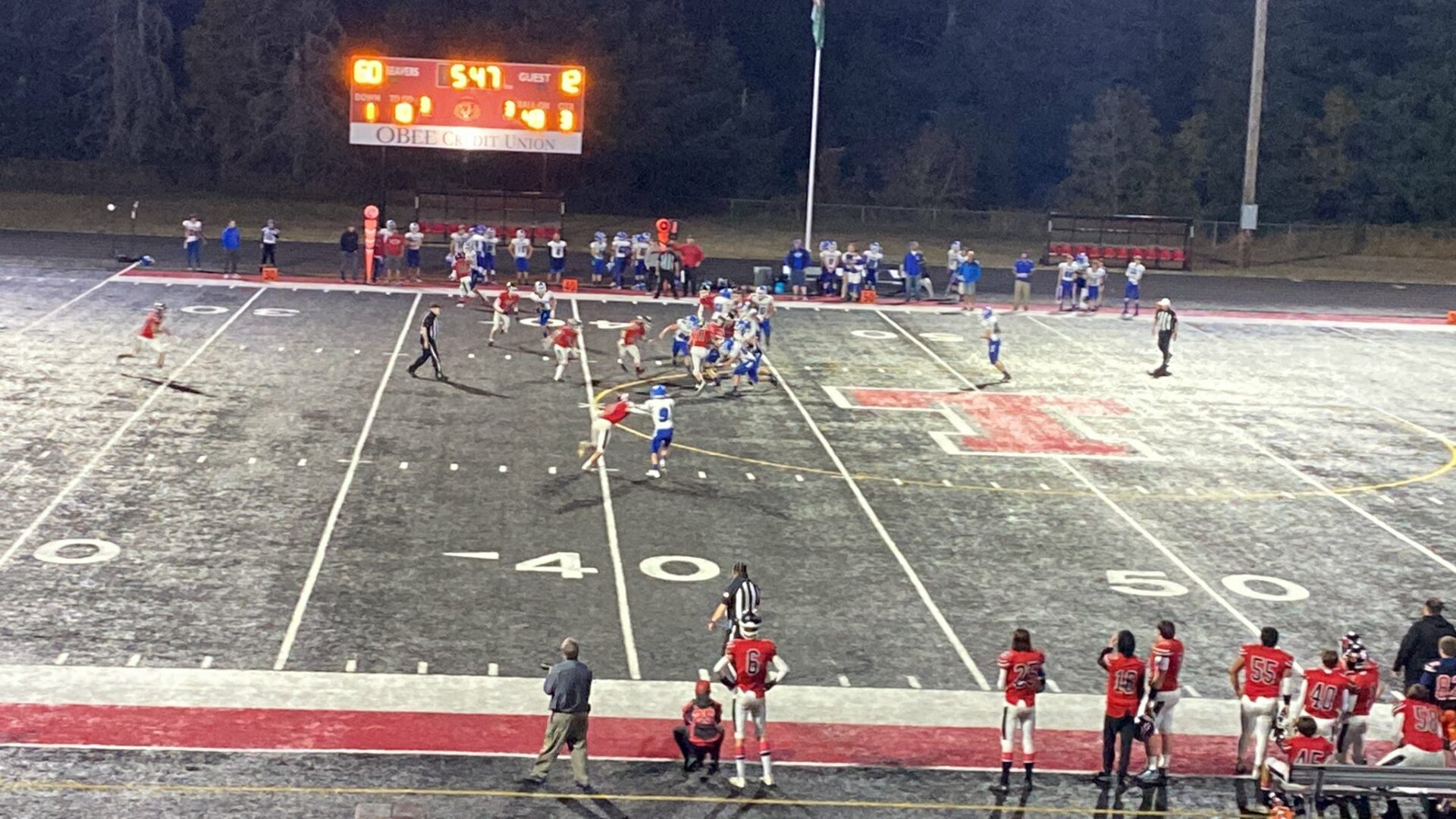 (Tenino, WA) Senior Night and Homecoming were celebrated in Tenino on Friday night but the endzone and the Beavers’ sideline would turn into a party as well. With the Elma Eagles coming to the Blacktop in need of a win, Tenino did what they have done all season and that is ground and pound their way to a league win as they defended their home turf in route to a 66-26 victory.

There isn’t ever a secret to what the Beavers are going to do on offense. They will run the ball right at the defense and make them find a way to stop it. The three headed monster of Dylan Spicer, Randy Marti, and Cody Strawn continued their impressive seasons, but Brody Noonan would get the start at quarterback for senior night. It would be a very good first drive especially for Noonan as he ran it in for an 8-yard touchdown to get the scoring started for Tenino.

A broken punt turned into a fake attempt by Elma but they would come up short and turned the ball over on downs. Dylan Spicer wouldn’t take long to turn that into points with a 38-yard touchdown to make it 14-0. Tenino kept the offense rolling with a Cody Strawn 24-yard QB keeper for a touchdown to make it 22-0 Beavers.

With Elma struggling to get anything going on offense, they decided to take a shot with their junior quarterback in Carter Studer. Studer launched a pass to Gibson Cain that was hauled in on the run. Cain was already behind the defense so he cruised his way in for a 69-yard touchdown to get Elma on the board trailing 22-6.

After that, the 2nd quarter turned back in favor of Tenino. Marti and Spicer both recorded touchdown runs of 3 and 75 yards respectively to make it 38-6. Elma would be able to answer with a much longer sustained drive to lead to points to give the offense some confidence. Carter Studer punched it in for a two-yard score to cut it to 38-12. However, once again Tenino answered with a long scoring drive finished off with an 18-yard touchdown run by Cody Strawn to send it to halftime at 44-12.

Tenino came out of halftime and immediately struck again with a 46-yard touchdown run by Dylan Spicer to make it 52-12 and start the running clock. Cody Strawn would add a touchdown pass to Max Craig for 31 yards and Brody Noonan got his second touchdown of the day with a 4-yard run. Carter Studer added two more touchdown passes to his day both to Kyren Hackney for 8 and 11 yards. Tenino was perfect on offense however and used that to roll to a 66-26 victory.

For Elma, Carter Studer went 13-29 for 224 yards and three touchdowns and ran the ball for another score. Gibson Cain hauled in five passes for 148 yards and a touchdown while Kyren Hackney had five catches for 54 yards and two touchdowns.

With the win, Tenino moves to 6-1 overall and 2-1 in league play. The Beavers will get ready for a big showdown with Montesano on Friday at 7pm. Elma drops to 2-5 and 0-2 in league play as the Eagles try to bounce back on Saturday when they host Eatonville at 7pm.

Elma Gets on the Board

Tenino Airs it Out