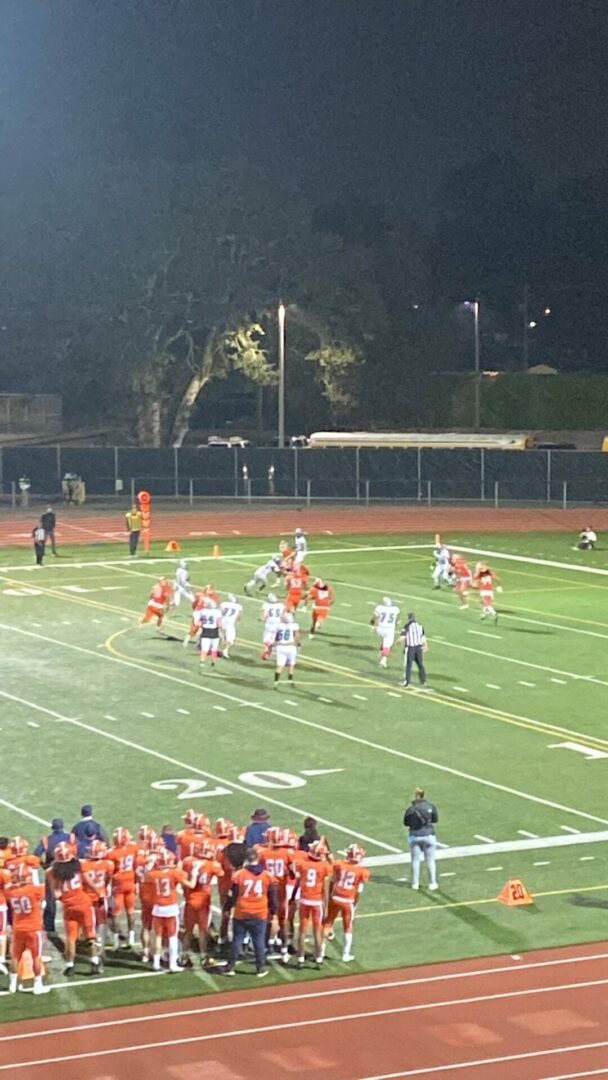 (Lakewood, WA) After having the game pushed back over the weekend to Monday night, the Spanaway Lake Sentinels finally made the trip to Harry E. Lang Stadium to take on the #9 Lakes Lancers in a big PCL 3A showdown. Lakes came into the matchup undefeated at 5-0 with their toughest part of the schedule during these two weeks. Spanaway Lake would steal the spotlight with their defense. And what started as a pretty good football game turned into straight up chaos in the 4th quarter as the Sentinels score in the final minute to knock off Lakes 16-15.

Lakes started with the football and got off to a solid start on a 12-yard pickup by Leo Pulalasi on their first play from scrimmage. Things looked even better when Ki’Marree Washington broke a long touchdown run but is was waived off due to a holding penalty. Spanaway Lake would then step up and force a punt after that to get their offense on the field.

Spanaway Lake then got the ball moving on offense relying on sophomore running back D’Aryhian Clemons. Clemons along with quarterback Dempsy James moved the ball down field steadily but would not be able to get in the endzone. Danny Amaral would trot out and nail a 30-yard field goal to give Spanaway Lake the first points and a 3-0 lead.

Both teams traded punts to end the opening quarter and Lakes had the ball marching down the field to start the 2nd quarter. The Lancers had the ball on 3rd and long from the 25-yard line and decided to take a shot. Legend Galeai threw a ball into the endzone looking for David Wells, but fantastic coverage by Zion Jones put him in position to make a play. Jones would intercept the pass in the endzone for a massive turnover to give the Sentinels back the ball with momentum.

Lakes would force a punt however to get the ball back and once again marched into Sentinels territory. However, the Spanaway Lake defense once again made a play when they knocked the ball free and recovered a fumble for their second takeaway. Every time Lakes got some momentum in the opening half, the Sentinels made a play to steal the momentum right back.

That momentum would turn out to be massive on the following possession. Spanaway Lake got the ball out to their own 45-yard line. James faked the handoff up the middle and ran out to the right. That would be when he faked a pitch and cut it back towards the middle of the field and he was gone. James scampered into the endzone with a 55-yard touchdown for the first touchdown of the game to extend the Sentinels lead to 10-0. They would maintain that lead going into halftime.

Lakes’ head coach Dave Miller had to have said something good at halftime to fire up the defense because they came out in the 2nd half looking like a completely different team. The Spanaway Lake offense would move the ball down to the Lakes 24-yard line, but penalties backed them up. A 4th and 16 pass by Dempsy James was dropped to force a turnover on downs to give the Lancers the ball.

Lakes wouldn’t do anything with their drive but a great punt and a hold against Spanaway Lake had the Sentinels backed up to their own 11-yard line. Pressure by the Lakes defense forced Dempsy James to get rid of the ball in his own endzone and he would be called for intentional grounding for a safety to get Lakes on the board trailing 10-2.

A great return on a short kick by Aslan Fraser set up Lakes in phenomenal field position. Once again though it would be the Spanaway Lake defense making a play. Issues on a handoff saw would have the ball on the turf and Spanaway Lake’s Zion Robinson would fall on it for another Sentinel takeaway to keep Lakes out of the endzone.

On the very next play, momentum swung the other way. This time it would be the Lancers recovering a loose ball to get their offense back on the field at the Sentinel 15-yard line. A holding penalty would back up the Lancers to the 23-yard line to start the 4th quarter. With a third and long, Lakes started the final quarter with a bang. Legend Galeai would loft a pass into the corner of the endzone and Leo Pulalasi would make a great adjustment to make a tough catch for the touchdown. Lakes wouldn’t get the two-point conversion, but they had cut their deficit down to 10-8.

A great return by D’Aryhan Clemons gave the Sentinels good starting field position, but on 2nd and 11 at their own 47-yard line, they would hand the ball off to La’Ron Paige and he was hit and dropped immediately on a big hit by Matai Sarte to fire up the Lancer defense and force a 3rd and 15. Things would get worse for Spanaway Lake on the very next play. Dempsy James dropped back to pass and tried to escape the pressure but Tayvion Smith would hit James and knock the ball out. Right there to scoop it up was Matai Sarte and he was gone on a scoop and score of 35 yards to give Lakes a 15-10 lead after an extra point.

The Sentinels would look to strike back as they moved the ball into Lakes territory after a penalty. On 1st and 10 at the 44-yard line, the Sentinels took a shot deep. However, David Wells would drift over in coverage and pulled down an interception for a massive play for the Lancers and their 2nd takeaway of the game.

Lakes would punt the ball back to Spanaway Lake with 1:35 left and the Sentinels would march right back down the field helped out by a 28-yard run by Clemons. The Sentinels had the ball at the two, but disaster struck once again. A high snap would go over the head of Dempsy James and Matai Sarte slid in to recover the loose ball for another takeaway by the Lancers.

Defense once again carried Spanaway Lake as they forced another Lancer punt. Darius Thomas returned the punt back to midfield and the Sentinel offense took the field with 1:35 left in the game. James fired a strike to Thomas who took a big hit and drew a penalty to add on to his 15-yard reception. With a 1st and goal at the one, Dempsy James would run a QB sneak for the touchdown to give Spanaway Lake the 16-15 lead with 19 seconds left.

It would not be over yet as Lakes moved the ball quickly on a 37-yard pass to David Wells who made a fantastic catch at the 35-yard line of Spanaway Lake. The Lancers opted for a 52-yard field goal attempt as time expired. The kick would come up short and Spanaway Lake hung on for a 16-15 win over #9 Lakes.

Our MVP of the game was awarded to the defensive line of Spanaway Lake comprised of Noah Ruiz, Cooper Aitken, T.J. Fiame and Zion Robinson. The front four dominated at the line of scrimmage and shutdown the entire Lakes’ run game between the tackles. They also put constant pressure on the Galeai to really set the tempo and keep the Lancer offense off of their rhythm.

Spanaway Lake moves to 6-1 overall and 5-0 in league play. The Sentinels will host Foss in their next game at a time TBD. Lakes drops to 5-1 and 3-1 in league play. The Lancers will travel to Lincoln on Saturday at 1pm in a game you can catch right here on ESN.

Defense Scores for the Lancers