There’s a Buzz in Tenino and the Beavers are ready for a fresh start! 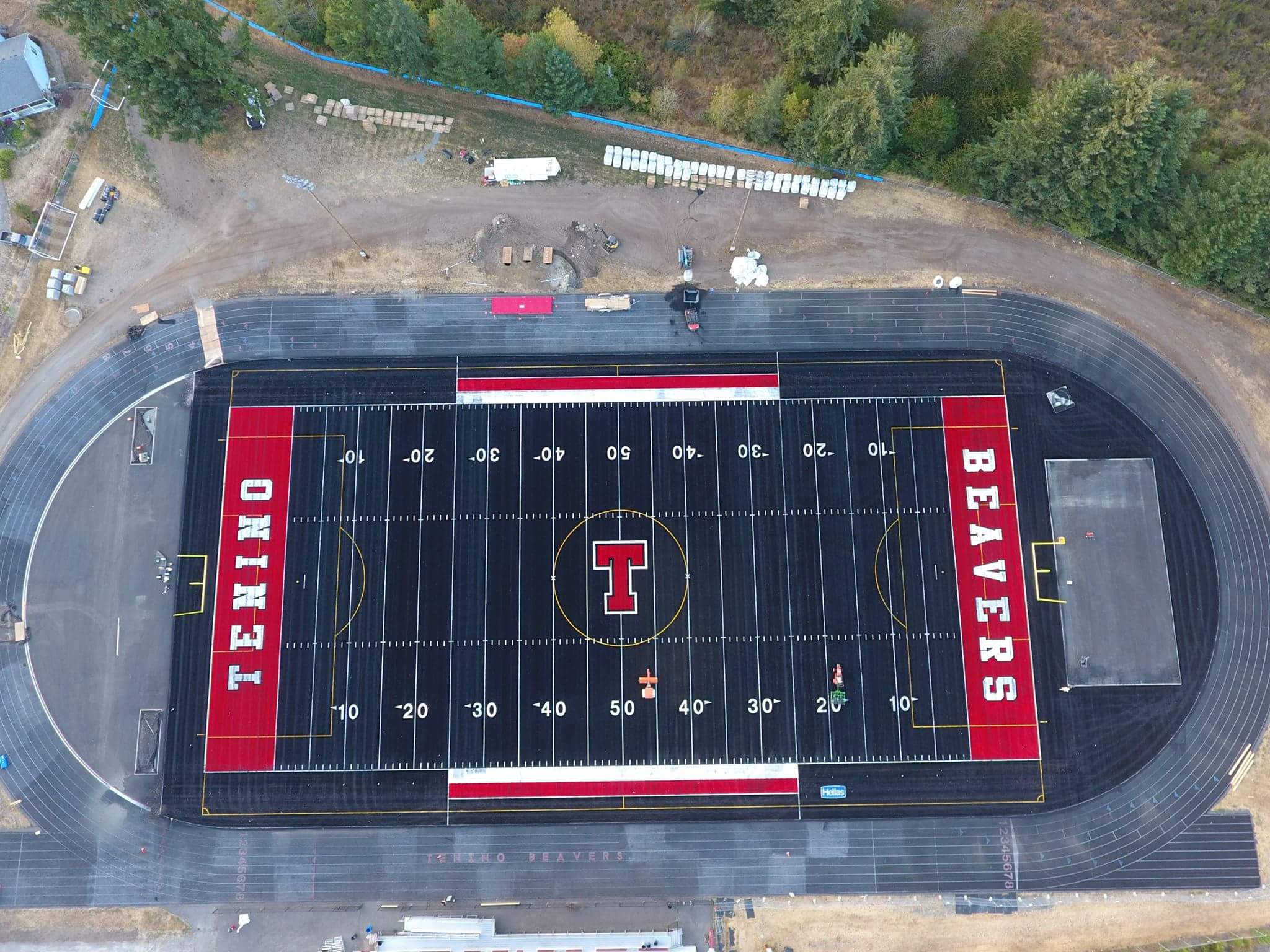 (Tenino, WA) New Head Tenino Football Coach Cary Nagel couldn’t have asked for a better welcome to his first ever Head Coaching gig. Nagel takes over a program with lots of potential which showed early on last season when the Beavers sprinted out to a 3-0 record and the offense was clicking scoring an average of 4 touchdowns per game. On top of that Nagel’s new office in Beaver Stadium now is next to the new Field Turf replacing the natural grass.

The new turf is also colored black with red endzones and will also accommodate the boys and girls soccer team. Next summer a new track will be added to finish the approximate 1.6 million dollar renovation project.

ESN was at Beaver practice on Monday evening the 1st time the team has had a chance to practice on the new turf. Athletic Director Joe Chirhart showed us around the new facility and says new lights have been put in and they hope a new scoreboard will be installed in time for the Friday night opener against their rival Rochester. Chirhart says the buzz in the community is strong and the excitement is boiling over. The game with the Warriors has now been dubbed the Scatter Creek Showdown to add to the traditional rivalry.

We also talked with Superintendent Joe Belmonte who said the Stadium project was a small piece of a large bond issue the community supported and passed. The bond is paying for significant upgrades in all of the District’s buildings and had enough to create this community focal point at Beaver Stadium.

Once the 1st kick-off has been launched to the other side on Friday night all the anticipation and hopes and celebrating the new facility will disappear as the Beavers try to improve on last year’s run. As we stated Tenino got off to a 3-0 start but finished with 7 straight losses including 3 games they could have easily won. Nagel says he is focused on fixing the problems that led to the close losses and hopes to dig into the separation between them and the 2 big dogs in the Evco 1A Montesano and Hoquiam.

using the natural strengths of the returning players with a spread, multi-set offense. Nagel’s defense will be a very 5-2 base defense look and says he will take shots at time with different blitz packages but wants to stay basic as much as possible.

Nagel says he is working to control the many potential distractions to his team coming into the opening night kick-off including his realization that he has the final say in all things. no longer does he make suggestions to the Head Coach on how to do something from pre-game routine to warm-ups to how to stand for the National Anthem. All decisions are now his.

Eli Sports will send our ESN2 radio crew of Garrett Spivey and Dave Weber to cover this game live for all the Tenino and Rochester fans who can’t get to the game which is expected to have an overflow crowd. Chirhart says they will drag over the Baseball bleachers to the visiting side for additional seating.

Friday nights are about to be much different in Tenino and the new team of Nagel, Chirhart and Belmonte are focused on turning the sports programs around and beginning with football they have already proven their commitment to that vision. All that’s left to do now is put on the new helmets and jersey’s, tee it up and kick it off on Friday night at 7p in the 1st Scatter Creek Showdown at the new Beaver Stadium.