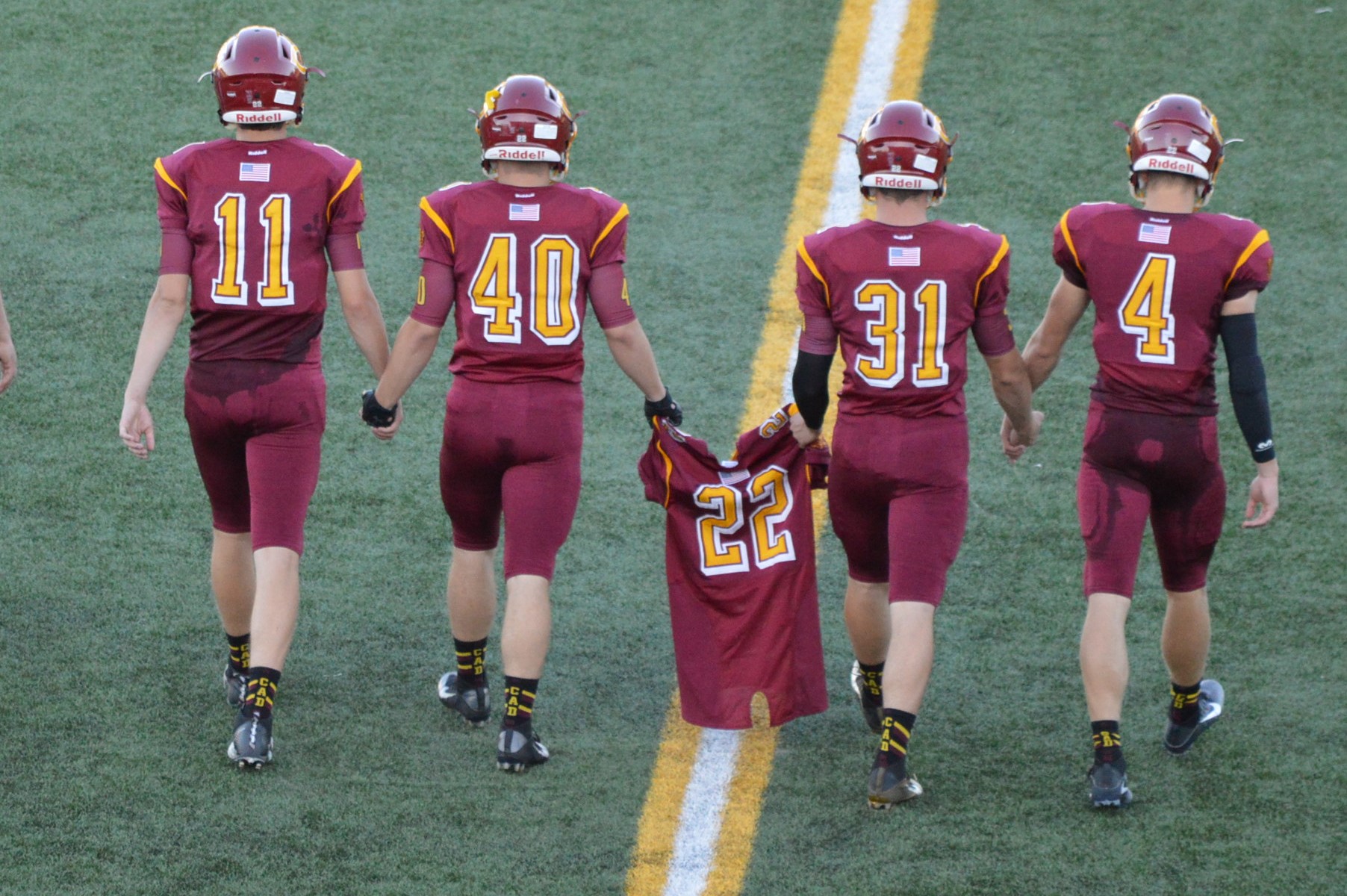 (Olympia, WA) The Capital Cougars have had a rough off-season with a late coaching change and losing a beloved teammate to cancer. Chris Heay would have had his #22 jersey on and likely been the starting running back in Friday night’s opener at home against River Ridge.

Instead Heay put up a courageous battle for his life against a very aggressive form of cancer. Heay left his mark on the the world in his short 17-year-life but more importantly when he left this world last April 28th he left his mark on this team who refused to give in when the chips were down.

The Cougars opened the game with an impressive 74-yard drive and began it with a straight dive play but with only 10 players on the field. New Coach Darren Tinnerstet who had been the offensive coordinator under long time head coach JD Johnson when Johnson stepped down in August, Tinnerstet then stepped in as the interim. Tinnerstet says it was the team who asked if they could run the 1st play with 10 players leaving the 11th spot for Heay. The team captains also carried Heay’s #22 Jersey with them to midfield for the coin flip. Tinnerstet says they have a picture of Chris with them in the locker room and on the sidelines.

Meantime, the River Ridge Hawks are coming off a strong season where they won the Sound division of the SPSL 2A and advanced to the State Tournament. The Hawks averaged more than 40 points a game last year but they graduated more than 20 Seniors and this year’s version of the Hawks came in lacking a ton of varsity experience. 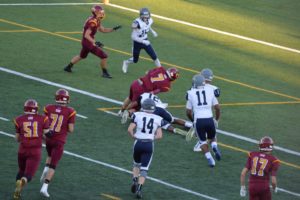 The Cougars got the ball first and on their own 26 and on their 1st play from scrimmage ran a simple dive play but with only 10 players. The 11th spot was reserved for Heay and tail back Eric Jackson took the ball for a 2-yard gain. This play would also win our ProActive Sports Physical Therapy Play of the Game.

The Cougs then went on an impressive 12 play drive and Jackson finished it off just like Heay would have with a brilliant 14 yard run for the touchdown. Carson Collard kicked the PAT and Capital took a 7-0 lead.

That would be it for the next 2 and half quarters as both offenses struggled while both defenses stepped up. For River Ridge Griffen Adams, Tyrese Thrower and Lamar Campbell all stuck out but it was Hunter Prida who took over with tremendous effort from sideline to sideline.

The Capital defense got off to a fast start holding the Hawks without a 1st down until their 3rd drive. Paden Riske, Mason Bertelli and Jesse Mattson were in the Hawks backfield all night shutting down the rushing attack and putting pressure on Ridge’s QB Jeter Larson. Linebackers Nate Tyler and Chase Vandiver also stood out with corner Regan Divina.

Midway through the 4th quarter Capital put up what looked like may have been simply too much for the Hawks to come back. The 2nd TD was keyed by a 23-yard screen pass from Grant Erickson to Jackson for a huge 1st down to keep the drive alive. The Cougs offensive line then took over again like they did on the opening drive. Nate Tyler gave Jackson a breather and pounded the ball right through the heart of the Hawks defense and Tyler knocked in the final yard as the Cougs took a 14-0 lead with 7:34 left to play.

The Hawks then averted a disaster and got back into the game when Larson dropped back and hit Blake Anderson who got behind the Capital defense. Anderson had a wide open field but at the 5-yard line he dropped the ball but fortunately it rolled out of bounds before the chasing defenders could recover the ball. Larson then hit Hunter Prida on a 5-yard pass, Jacob Miller kicked the extra point and with exactly 5-minutes to play the Hawks were back in the game trailing 14-7. 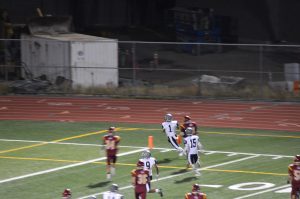 The Hawks then stunned the Cougars when they were held to a 3 and out and forced to punt. Chad Garland booted and the ball bounced near the 50 and took a Capital bounce to about the River Ridge 45 when Tomasi Manu took the ball on a bounce at a full sprint and found a hole over the left side. Manu crossed into Cougar territory and cut back to the right and out-sprinted them all taking it to the house for a 65-yard punt return touchdown.

River Ridge Head Coach then decided to go for 2 but faked it out of a PAT line-up and Blake Anderson got around the left side and got just inside the pylon for the 2 points and the Hawks took a 15-14 lead with just 2:59 left to go in the game.

How would the Cougars respond is what Tinnerstet wanted to know about his team and the answer he got was the one he wanted. Trevon Moore returned the kick-off to the River Ridge 48. The game came down to 2 fantastic plays which each could have won the Play of the Game award in other situations. Capital was facing a 4th and long with the game on the line when Erickson hit Divina and picked up 17 yards for the 1st down.

Capital drove down to the 21 of the Hawks when they resorted to a bit of trickery. Erickson dropped back and threw a swing pass out to Isaiah Walker in the flat. The pass was a backwards pass so counted as a lateral. Walker then stepped up and hit a wide-open Jack Collard in the endzone for the go-ahead score. The Cougs missed on the attempted 2-point conversion but re-took the lead 20-15.

Capital then held the Hawks on the following drive and kneeled a couple of times to run out the clock and notch the opening night win.  Our Pacific Sports Spa Players of the Game went to Capital’s Jack Collard and River Ridge’s Hunter Prida.