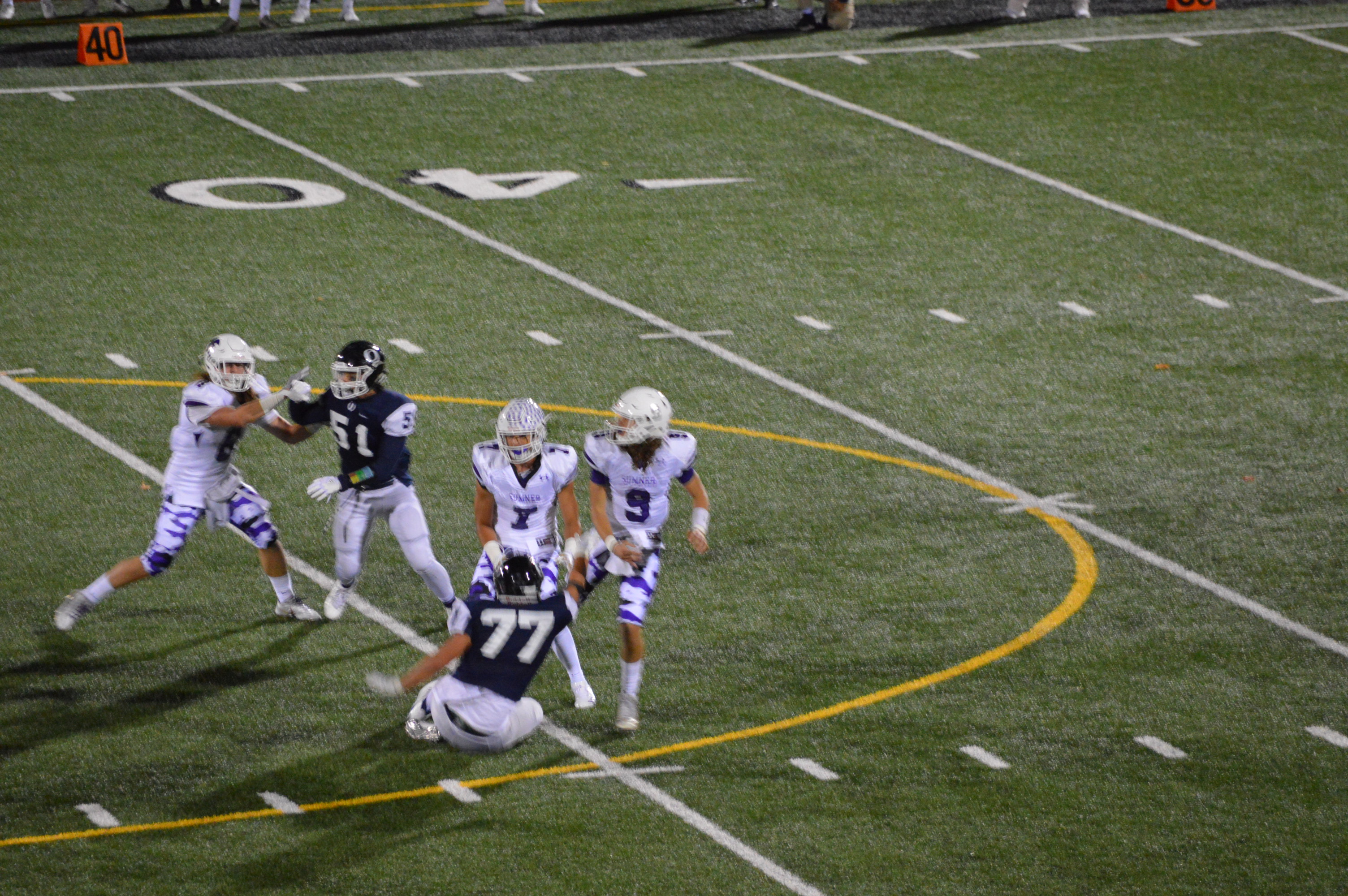 (Olympia, WA) The score was worse than the game when you take a look at how many times the Bears moved into the Spartan Red Zone only to come away with nothing. It began with the opening kick-off where the Spartans fumbled the ball and Olympia fell on it at the Sumner 19.

The Bears offense then experienced something they would all night long frustration in the Red Zone. Olympia got to the 10 but with a 4th and 1 they were unable to get the play off as they went for the 1st down and got flagged for a delay of game. The Bears then tried a field goal but the Kenneth Dinyuy kick was just short and the Bears were denied.

their own 46. QB Luke Ross would first hit Thane Birrer who made a spectacular 1-handed catch while getting interfered with. Ross then stepped back and while under duress floated up a beautiful up and out and up pattern from Tre Weed who ran under the ball in the upper right corner of the endzone for the score. Colton Sigafoos added the PAT and the Spartans took a 7-0 lead in the 1st quarter.

a defense that bent and committed several penalties giving the Bears golden opportunities but the Sumner D never fully gave preventing Olympia from hitting the board.

Sumner’s 2nd touchdown was set up by a spectacular interception from corner Mason Donovan on the Bears 46. The Spartan running game would be key in running the clock and controlling the game. After driving the ball down to the 1 yard line Ben Wilson plowed in for the 2nd score of the game. It was Wilson’s 1st of 2 TD’s who also finished the game with a game high 142 rushing yards.

The Bears looked like they might get on the board with the opening drive of the 2nd half after Kelton Young connected with Casey Kendall on a 28 yard play and was followed up with a defensive hold and Pass Interference moving them again into the Spartan res zone where they would turn it over on downs.

Sumner struck quickly with a huge 82-yard pass play from Ross to Birrer on a simple slant. The play-action drew the attention of the linebackers and safety over the top opening the door for an easy pass and catch to Birrer who had some separation  with the corner and was gone right up the middle of the field and just like that the Spartans were up 21-0.

Ben Wilson certainly iced the game with about 5 minutes to play running in his 2nd TD from 8 yards out and the final score was on the board at 28-0. With the win the Spartans snapped a 2-game losing streak that Coach Ross could not even remember the last time they had such a streak and are now 3-2 in league play and finish their schedule with Bellarmine Prep, Rogers and Emerald Ridge.

The Bears dropped their 2nd SPSL game and are now 4-2 but still have the top 2 teams Graham-Kapowsin and Puyallup before finishing up with their non-league game in the final week versus Meadowdale.

Our Pacific Sports Spa Players of the Game went to Ben Wilson for Sumner who had the 2 TD’s but also added an interception and multiple bug tackles in the middle of that stingy defense.  For Olympia Isaac Muckian played a great game on both sides of the ball and blocked a punt. Our ProActive Physical Therapy Play of the Game went to the combination of Luke Ross passes 1st to Birrer with the 1-handed catch and capping it with that perfect throw to Weed to start the Sumner scoring.