Dist 4 2A Volleyball: 2 Seeds battle for Title and Spudders pull out Dramatic win over Wolves 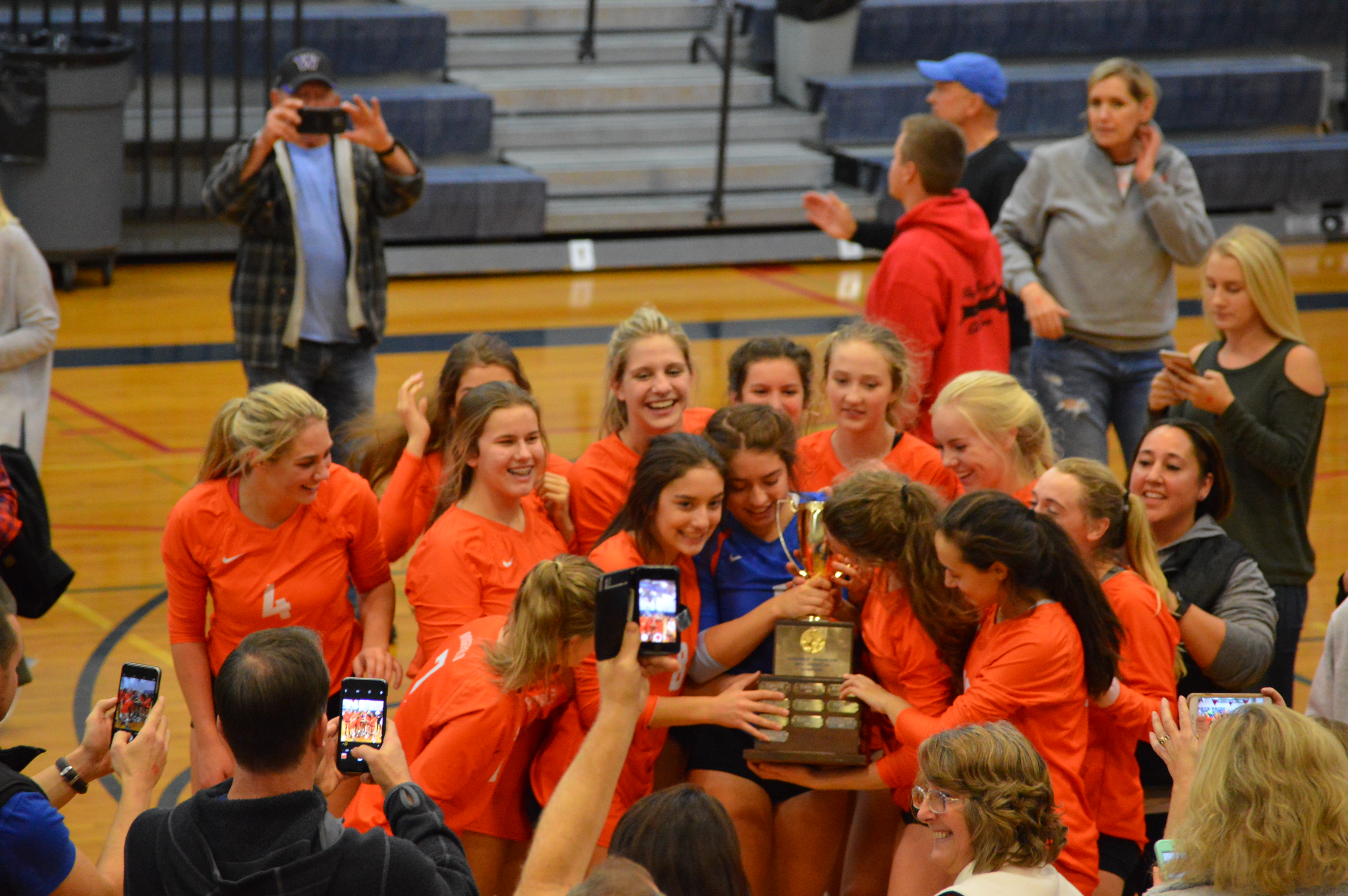 (Tumwater, WA) The defending State Champions Tumwater and the number 1 seed from the GSHL Woodland were expected to face off at 4p on Saturday afternoon in the District Title match. Both teams would have already qualified for the State Tournament and we would have simply sat back and enjoyed a battle of the 1’s. At least that’s how it penciled out on paper.

This is where the saying, “that’s why they play the games” came from because the only thing that penciled out was that the District Championship game was one no one will forget anytime soon. The rest of the penciling was erased.

Woodland didn’t even make it to day 2 after losing 3-1 to Hockinson who only got into the tournament after beating WF West in a play-in game and actually finished 5th in the GSHL. The stunning loss carried over into the 1st round of the consolation that saw Washougal send Woodland home early with a 3-2 win.

Meantime, Tumwater advanced as expected to the Semi-Finals where they met Ridgefield. The Spudders have had a long history of success in Volleyball including 2 State Championships and most recently a 6th and 3rd place finish the past 2 years. They also have not been able to unseat Tumwater at the District Tournament and have settled for runner-up finishes.

This year would be different but it would take all 5 sets and tremendous efforts on both sides. In set 1 the Spudders just kept adding to their lead and when Haley Paul took over the serve with a 19-12 lead she pushed it to 22-13 and it was too much to overcome for the T-Birds as the Spudders took set 1.

The two teams traded points and at 7-6 Ridgefield leading kamryn Reynolds came up with a great change of pace drop shot that extended the Spudder lead to 2. Kohana Fukuchi then stretched the lead to 14-9 but could not close it out. Tumwater scored 2 but the Spudders finally beat the T-Birds with a 15-11 5th set win to take it 3-2.

The win ensured the Spudders a trip to the State Tournament and the District Title match.

In the other semi-final Black Hills rolled over Hockinson in straight sets 3-0 and also advanced to the District Championship Match while securing a trip to State. So the 2 #2 seeds emerged as the teams in the final match of the tournament.

Tumwater dropped into the consolation bracket and faced Washougal who had eliminated the other #1 seed, Woodland, on Thursday. It looked like maybe they were set to be giant killers again when they took the 1st set against the T-Birds 25-19. Tumwater quickly re-grouped and rolled in the next 3 sets to advance against Columbia River who swept Hockinson in the other consolation game.

Tumwater then jumped out to a 2-0 lead on the Chieftains and appeared ready to cruise to the 3rd place trophy and the final State birth but Columbia River decided to make it difficult and took the next 2 forcing a 5th set and pulled out to a 7 point lead. Tumwater recovered just in time and came back to win the 5th set and kept their season alive with a 15-13 victory.

If you thought now that all the State positions were taken and we were down to a match over seeding so the play would fall off well you would be wrong. Although it didn’t look like the Wolves hearts were in it for the 1st 2 sets as Ridgefield cruised 25-18 and 25-15. In that 2nd set the Spudders at one point led 21-9. Anika Nicoll and Delaney Nicoll were huge at the net and sent booming kill shots after another at the Wolves dominating early on.

In set 3 the two teams ping-ponged back and forth all the way to 21-20 with the Spudders holding a 1 point lead as the Wolves sent Kailie Storm to the service line. Storm was the perfect adjective as well as she fired 5 straight points including an ace for the win. Storm was helped by Hannah Rongen who was tremendous at the line with kill shots and huge blocks.

In set 4 the Wolves trailed for the 1st half of the set until Emily Larson fired off 4 straight points and Black Hills never trailed again to even the match and and send it to a 5th and final set.

Both teams buckled down and were hammer and tongs back and forth to a 14-14 score assuring extra time. That’s when Anika Nicoll came to the line and she delivered 2 points and Ridgefiled won the District Championship with a 16-14 5th set win over a very good Black Hills squad.

The State Tournament begins on Friday, November 10 and runs thru Saturday the 11th at St Martins College in Lacey. Eli Sports will be broadcasting live all matches at the State Tournament both days. Both free audio and pay-per-view video will be available.