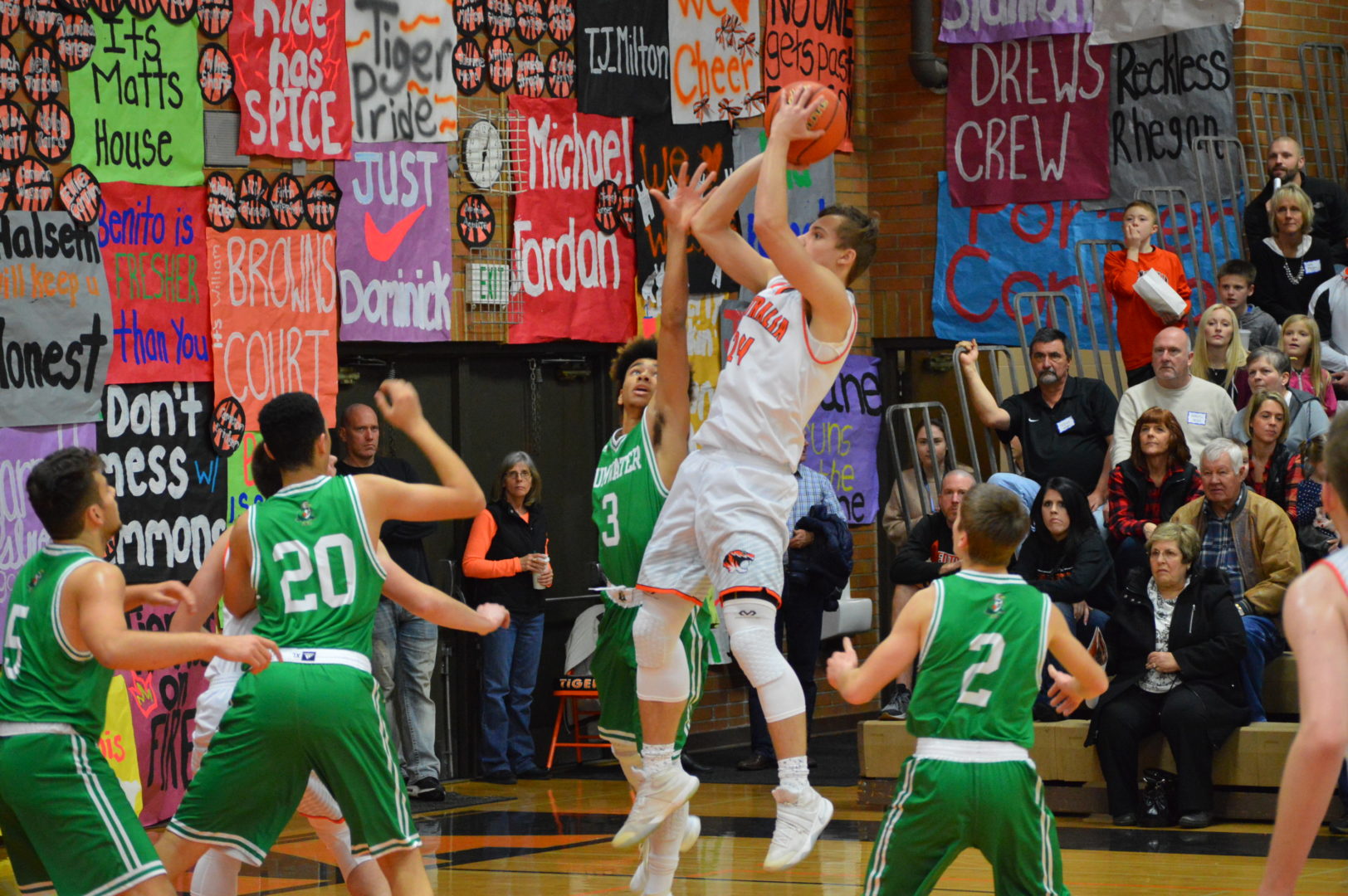 (Centralia, WA) It was a special night and no doubt the pressure was on the home team Centralia Tigers. It was Ron Brown night a retirement ceremony had taken place prior to the JV game with Tumwater in the school’s classitorium. Several guest speakers relayed their experiences either playing for, coaching with or coaching against Brown who spent 56 years as the Tigers Head Basketball Coach. There was a planned halftime recognition ceremony also scheduled so the last thing the Tigers wanted to do under new coach Kyle Donahue was then lose the game on this special day.

It didn’t look good in the 1st quarter for Centralia as Tumwater seems to be starting to get things in order under new Head Coach Josh Wilson. The T-Birds were without starter and inside presence Thomas Drayton on this night but got started fast on offense with some hot shooting especially from behind the arc.

The T-Birds hit 5 3-point shots and also went 4-5 from the line to pace a 21-point quarter led by Damon Gaither who had 2 3’s and 8 points. Jelani Jones also hit 2 long balls for the T-Birds. Centralia’s leading scorers Tyler Ashmore and Dan Janssan both got off to slow starts with 7 of just 15 points.

As the 2nd quarter began the Tumwater outside shot began to slide while the inside game of the Tigers picked up with a nice mix of long-balls. Centralia would knock down 22 in the 2nd and began with a 16-3 run with Ashmore, Janssan, Connor Wasson all scoring plus off the bench Malakai Emmons and Michael Ajoge also chipping in with strong efforts off the bench. Tumwater’s CJ Geathers’ 3-point shot were the only points for Tumwater in the 1st 5 minutes of the 2nd quarter and found themselves down 37-31 at the break.

The T-Birds would hit for 8 3’s in the 1st half and get only 4 in the 2nd half including 2 late in the game after the outcome had been decided and they could not match the pressure Centralia put on their defense. Janssan finished with a double-double with 17 points and 10 assists. Janssan put on a show with his incredible passing while Ashmore was the recipient of several of those passes and finished strongly leading all scorers with 28 points.

Centralia is now 2-0 in league play and 6-6 overall. That overall record could be markedly different but the Tigers lost 5 of those games by single digits and a shot here or a break there could easily have turned many of those losses into wins. The Tigers seem to be finding their legs under the 1st Head Coach since JFK was elected President…and that is literally!

Tumwater drops to 1-1 and 4-7 overall. Our Pacific Sports Spa Players of the Game went to the Tigers’ Dan Janssan and the T-Birds’ Jelani Jones.