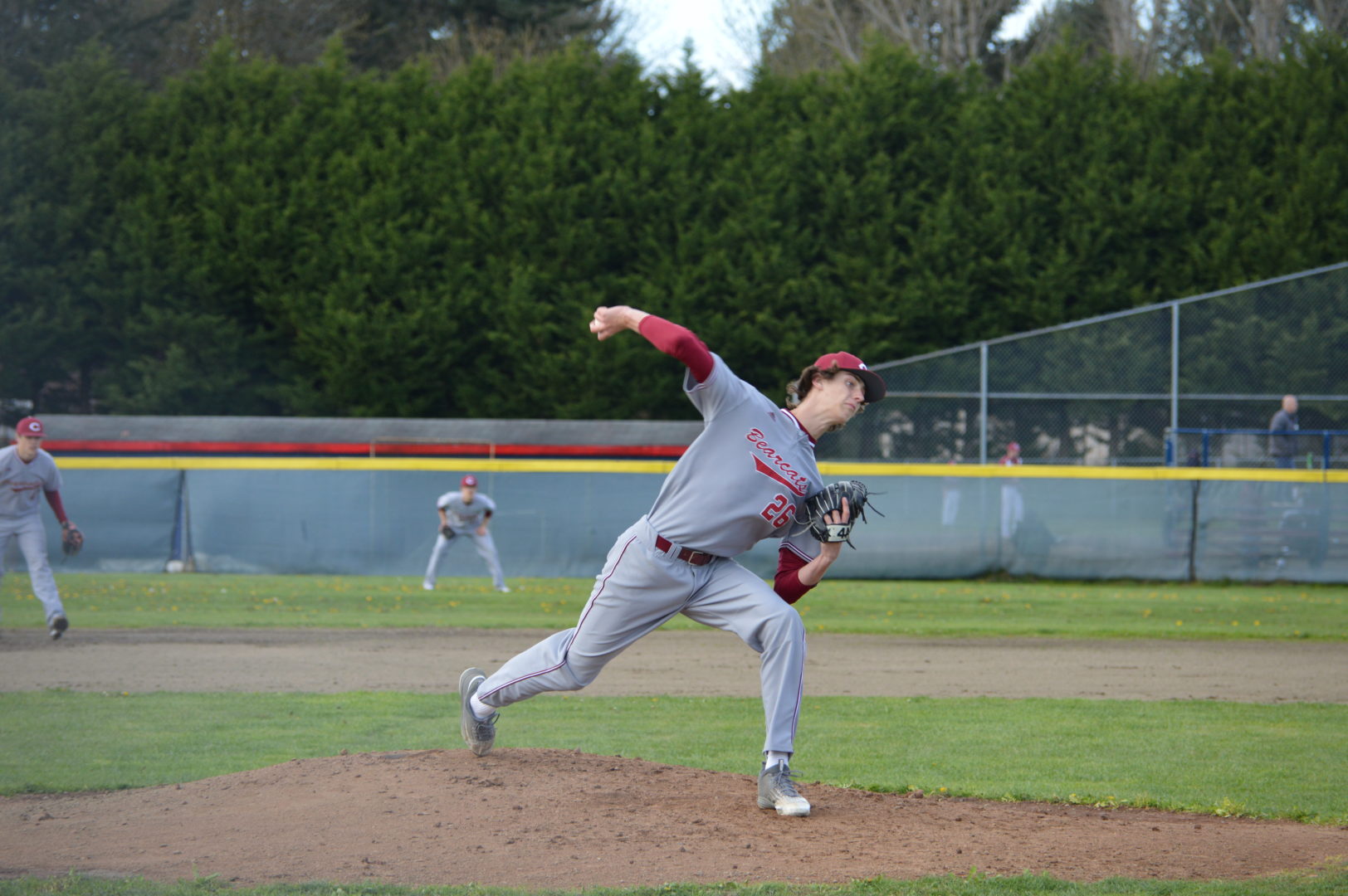 (Tumwater, WA) Sometimes an athlete gets in a zone and they become unstoppable and Tuesday the Black Hills Wolves got to find out what that is like to face when Brandon White got the start for the 1st place WF West Bearcats. White will tell you he has more work to do despite no-hitting the Wolves and striking out 14. White faced just 23 batters just 2 over the minimum and gave up only 3 base runners on an error, a walk and a HBP. One of those innings the Bearcat defense turned a double play for a non-traditional 1-2-3 inning.

WF West Coach Bryan Bullock certainly can’t ask for more from his pitcher or defense but no doubt will focus on the several opportunities the offense failed to open this game up allowing the Wolves to hang in there for the entire 7 innings. The Bearcats put 2 on the board against BH starting pitcher Ethan Loveless in the top of the 1st. After walking lead-off batter Tyson Guerrero, Lane Douglas singled to put runners on 1st and 2nd. Nole Wollan then grounded into a 4-6-3 double play pushing Guerrero to 3rd with 2 outs. Dakota Hawkins then belted a shot to right center for an RBI stand-up double. Brett Jones followed with a double of his own making it 2-0 before Loveless got a ground-out to end the inning.

Loveless would then battle the powerful Bearcat offense coming up with 2 huge strike-outs with the bases loaded to get out of the 2nd. In the 3rd a 1-out double by Leandre Gaines was wasted with Loveless coaxing a grounder and a strike-out. In the 4th Josiah Johnson led off with a single for Chehalis followed by a strikeout and a base hit the Cats had 2 on with 1 out. Loveless then got to ground balls to 3rd baseman Cole Burny and through 4 it was still just 2-0.

The Bearcats had left 9 runners on base through 4 and although White had 14 strikeouts for the game Loveless had 5 of his own and all important ones stopping potential scoring runs by the Cats. In the 5th WFW would break through again with 2 more. The inning began with yet another great defensive play by the Bearcats when Jones unloaded a shot deep to right field that Andrew Wilmoth ran down and threw to his cut-off man 2nd baseman Jaden Cote who then gunned down Jones trying to stretch the double into a triple. Loveless then hit 2 batters and gave up a single loading the bases. This was enough for the Loveless and he was replaced but a wild pitch and another walk would score the 2 making it 4-0. Chehalis then scored 2 more in the 6th with 4 walks and an RBI base hit from Guerrero.

Meantime, White faced 4 batters in the 1st and 2nd innings but still struck out the side in both innings. He had 10 strike-outs in the 1st 4 innings and after the 2nd the only base runner he gave up was Wyatt Rollman to lead off the 6th who was then thrown out by Bearcat catcher Drew Reynolds on a hit and run to end the inning. The Bearcats are now 4-0 in Evco 2A play while the Wolves fell to 1-3. Same 2 teams at WF West set for Wednesday.

The Pacific Sports Spa Players of the Game went to Chehalis’s Brandon White and the Wolves’ Ethan Loveless. the Thorbecks Sportsmanship Award went to the Bearcats’ Drew Reynolds.