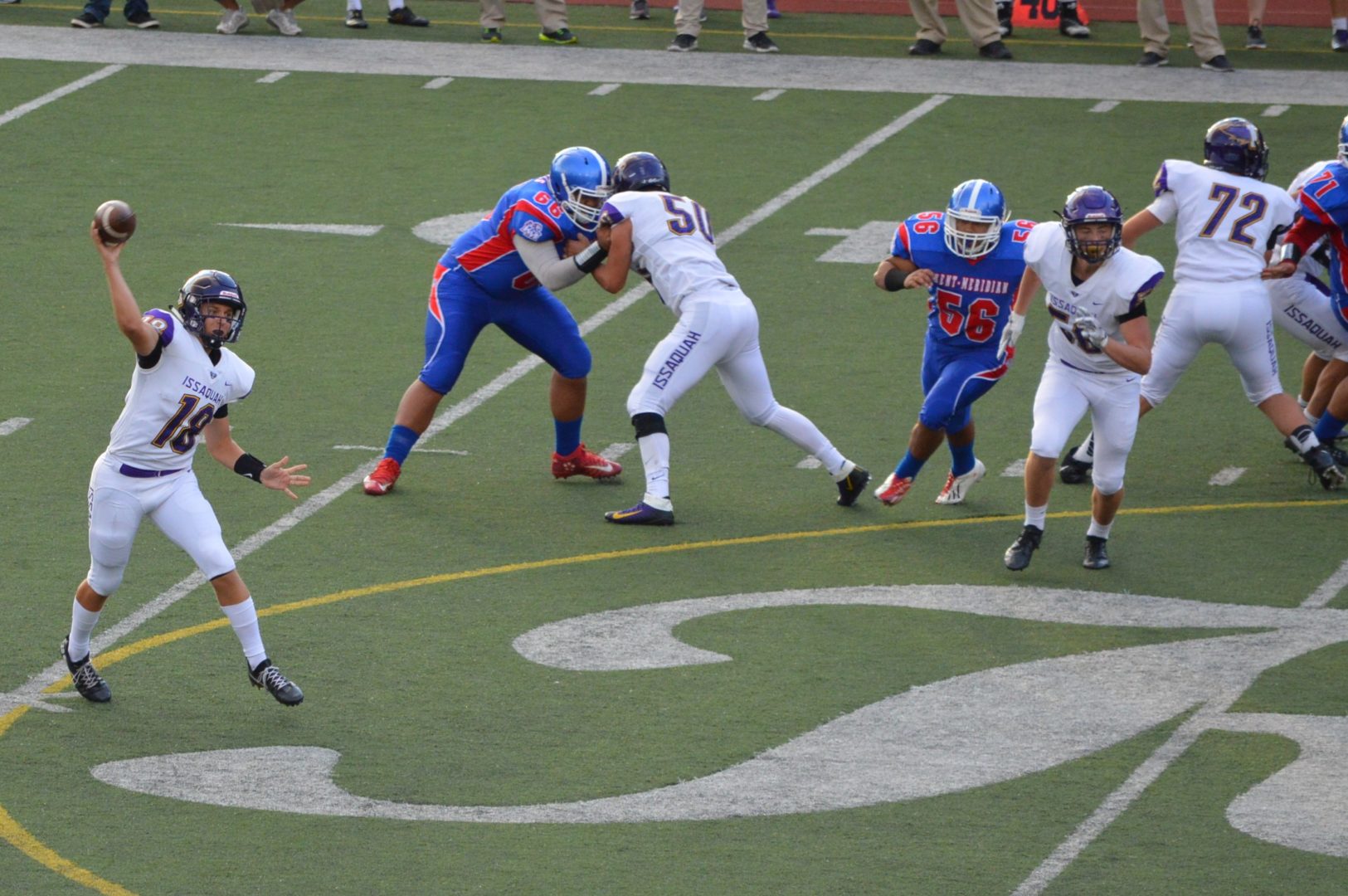 (Kent, WA) It was the 2018 kick-off to the High School Football season and one of a handful of games that kicked off on Thursday night. Both the Issaquah Eagles and Kent Meridian Royals were looking to get off to a fast start after rough seasons last year. The Eagles were 3-7 and the Royals winless. Both teams had their chances in this one but missed opportunities and big plays defined the outcome.

The Royals began the game and moved the ball to midfield but on a 3rd down on over throw from QB Isaac Cordova led to an easy interception by Lucas Senatore to end the drive. The Eagles two teams then exchanged punts and the Eagles took the ball for the second time on their own 40 yard line. The Eagles pushed the ball down the field on a combination of short passes and solid runs with the big hit a 17 yard connection from QB Trevor Morine to Tight End Brandon Fullmer. Morine then hit Gaje Gunter in the back of the endzone for the 1st score of the season to take a 6-0 lead after the PAT failed on a low snap.

The Eagles defense held firm and forced a 3 and out and got a good return to the KM 48. Morine would connect with Ryan Baker down to the 1 yard line. Baker was right at the line but the officials after conferring with each other ruled the ball did not cross the line and placed the ball on the 1. Isaac Pak then carried it in untouched over the left side of the line. Arpan Kundu then kicked the extra point giving Issaquah and 13-0 lead.

The Royals knew they had to get on the board and not let this game get out of reach and with 3:55 left to go took over on their own 33. The Royals moved the ball down the field with Cordova finding his receivers including Karandep Dhillon, Nate Jones and Ronald Wilson. On 2 occasions the Royals receivers beat the Eagles deep coverage that led to pass interference penalties. With 20-seconds to go Cordova dropped back and zipped a throw to Dhillon from the 11 to ge the Royals on the board. Rodrigo Teixeira popped through the PAT to cut the deficit in half trailing 13-7 as they went to the break.

The Royals defense did their job to begin the 3rd quarter stopping the Eagles and getting the ball back to the offense on their own 32. KM looked like they were on their way to tie or take the lead but the Eagles defense stiffened and forced the Royals to tun the ball over on downs. With 4:25 to play in the 3rd K M was putting pressure on Issaquah who took over on their own 28 and had the Eagles where they wanted them with a 3rd and 9 when Gaje Gunter struck again. Morine rolled to his right rared back and fired a long shot down the field where Gunter split defenders and one of his own receivers making a spectacular catch then spun out of a tackle and sprinted in for the touchdown.  The 2-point attempt was not good but Issaquah came away with important 2 score lead 19-7.

That lead would hold up as Kent Meridian continued to have chances and moved the ball but key drops were the difference in this game. The Royals receivers struggled mightily at times and Cordova continued to put the ball on the money and ran for 84 yards to lead all rushers for both teams. Issaquah put the game away and yet another unbelievable catch by Gunter as he laid out for a 30 yard connection down to the 4 yard of KM and were able to run the clock down to 2 seconds to play to clinch the win.