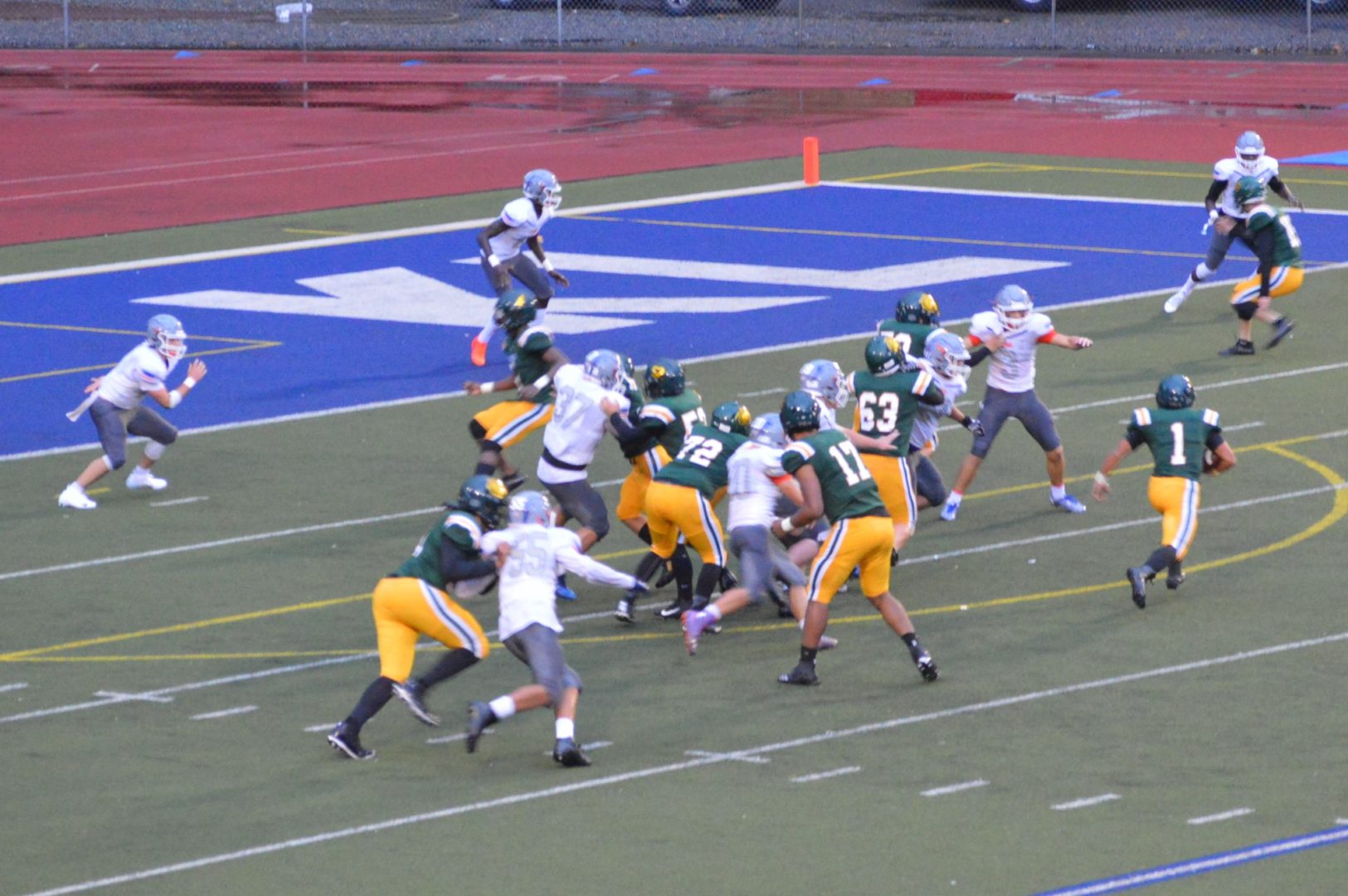 (Kent, WA) The Kentridge Chargers have been racking up the points through 2 games scoring a total of 78 points on their way to a 1-1 start. The Lions of Auburn-Mountainview just missed against cross town rival Auburn-Riverside in their opener and then blown-out last week 49-0 against Enumclaw and were looking to bounce back. After a fast moving 1st quarter the Chargers looked like they were on their way to another huge night of offense and the Lions looked like they were about to suffer another Enumclaw.

The run began with Kentrdige’s 2nd possession taking over on their own 40 with 3:13 to go in the 1st. They quickly drove the ball down to the 1 and had a 1st and goal when a big defensive play stopped running back Jaron Gonzales for a 3-yard loss. On the next play Kentridge got those 3 yards back setting up a 3rd and goal back on the 1 when 6’5 250 pound QB Natano Woods surged across for the 1st touchdowns they would score in the 2nd quarter. Elijah Mang connected on the PAT and it was 7-0 with 11:31 to play in the half.

After a 3 and out the Chargers offense took 1 play to go up 13-0 when Woods hit a streaking Ben Victoria down the left side of the field for a 67-yard touchdown strike. The drive took 8 seconds but Kentridge led 13-0 after the kick missed, a low snap didn’t help the PAT and the low snap would come back to play a big role in the 2nd half.

Kentridge then recovered a fumble on the AMV 35 yard line when Cooper White had the ball pop out and Jalen Stone recovered. But a few plays later Woods under pressure threw across his body into the endzone and White made amends with a great interception just in front of the backline to give the ball back to the Lions. The Chargers held and forced a 3 and out when Jeremy Banks made the Lions pay with a spectacular 60-yard punt return into the endzone and just like that it was a 20-0 lead.

The Chargers weren’t done yet and with 2:55 to go in the half got the ball back on their own 30. Woods continued to pick apart the Lions defense driving the ball quickly down to the AMV 22 where he once again hooked up with Victoria to put the final touches on a huge 2nd quarter. Mang hit the extra point and Kentridge held a significant 27-0 advantage and had the lions right where they wanted them on their heels.

Little did we know that would be it for the Chargers and the Lions would make a serious run starting with the following kick-off. Jeremiah Penn fumbled the kick-off turned around picked it up and then sprinted down the near side and side-stepped a couple of would be tacklers inside the 20 and in for a score. Carlos Huizar added the extra point and AMV went to the half down 27-7 but they were on the board and had some momentum behind them.

Kentridge began with the ball to start the 3rd quarter and drove it deep into Lion territory looking like they were going to pick up where they left off in the 2nd quarter but turned the ball over instead and AMV got it back on their own 24. The Lions then took the ball and went on a 10-play drive down to the Kentridge 24 where they turned it over on downs. The 2 drives chewed up nearly 10-minutes of the 3rd so even though the Chargers blew a scoring chance on the opening they drive they did accomplish running the clock down.

The Lions got the ball on their own 15 and a bold move by Head Coach Jared Gervais with a 4th and 2 on their own 23 went for it with QB Drew Davenport keeping it for a 13-yard run keeping the drive alive. Davenport would then hit sophomore Josh Toney for a 37-yard touchdown pass capping the 85 yard drive and pulled within 27-14.

Once again the Chargers looked primed to take control back when Banks went on another run taking the kick-off return 75-yards to the AMV 20. Banks was forced out by the last line of defense in Carson Klemetsen. That proved to be a huge play as Kentridge struggled with low snaps to the Woods in the shot-gun position especially in the 2nd half. On 1st down the low snap would get away from Woods and AMV recovered. Davenport then led the Lions down the field with Cooper White and Bill Benjamin catching balls and moving the chains. The drive was capped off with a 20-yard strike to Benjamin the Huizar PAT pulled the Lions within 6 trailing 27-21.

After a 3 and out Kentridge was forced to punt again and the Lions White came up with a huge return to the Charger 30. Berkley Alfrey then busted off a 19-yard run to the 11 for a 1st and 10. The play of the game then may have been this little 5-yard penalty for a false start moving the Lions back to the 16. Then a bad snap of their own pushed AMV back to the 24 and eventually settled for a Huizar 37-yard field goal and with 2:32 to play in the game it was 27-24.

The Chargers simply needed 1 first down to likely run out the clock but they could not do that and punted the ball out on the Lions 46. AMV moved the ball down to the 35 but 2 big defensive plays led by Jayden Haymes stopped the Lions just short of getting into Huizar field goal range and turned the ball over on downs with 10-seconds to play. Kentridge now matched their win total from last year where they finished 2-8 and the Lions fall to 0-3. Kentridge Head Coach Brett Ogata was thrilled with the win and said clearly they have things to work on but praised his teams fortitude hanging on getting a big win.

Our ESN Players of the Game went to Kentridge’s Jeremy Banks and AMV’s Cooper White.