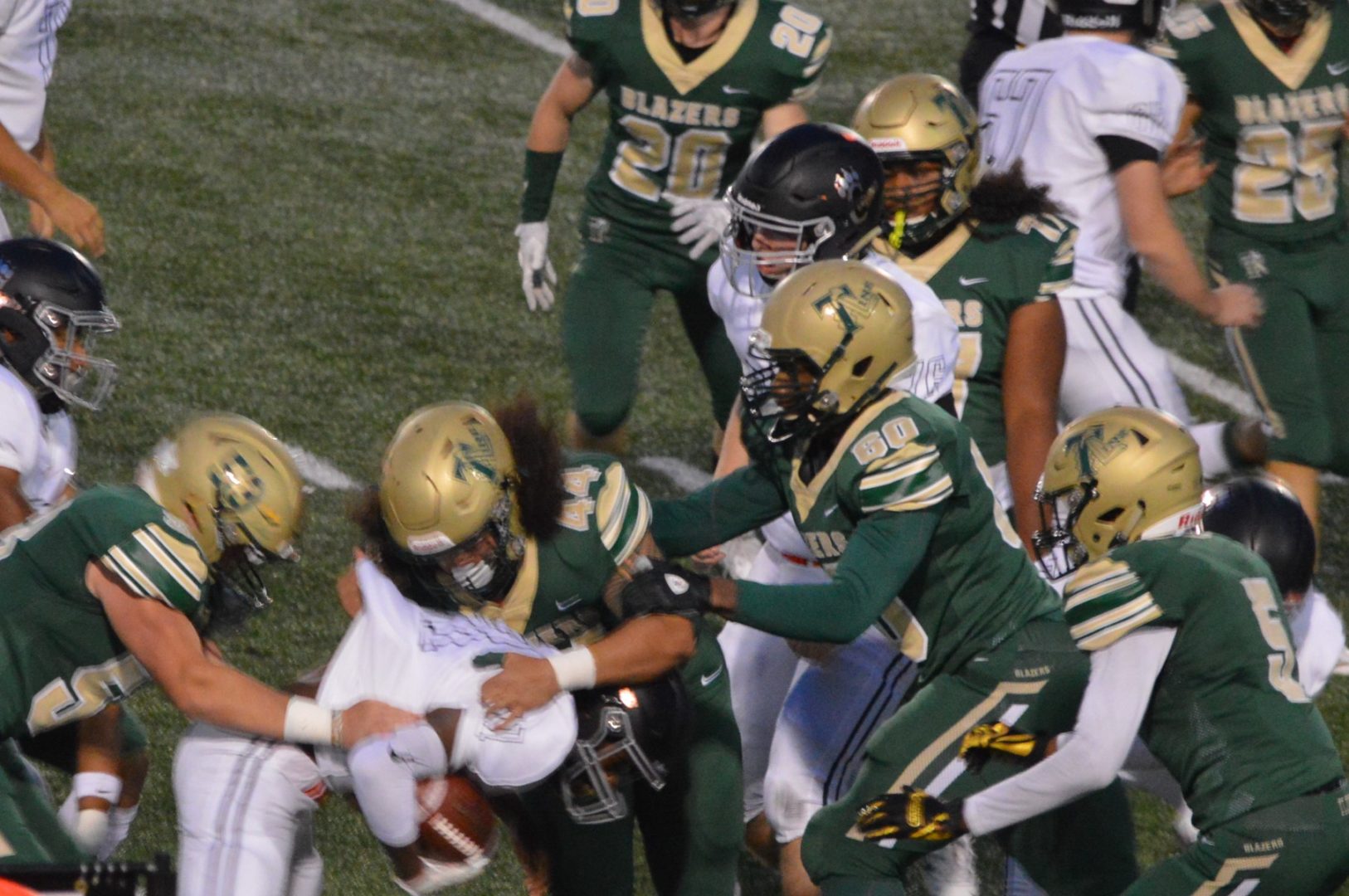 (Kent, WA) The Chargers were outplayed through the 1st half and trailed 6-0 in a defensive dominated 24 minutes of football. The Raiders came out on their heels in the opening drive by Kentridge as they worked the ball down the field but then once inside the 30 TJ put the brakes on and forced the Chargers to turn the ball over on downs. The Raiders would punch in the only score of the 1st half in the 2nd quarter when QB William Eagling hit Alex Izhevskiy on a 38-yard strike followed by Damarion Davis running it in from the 2, the PAT failed and it was a 6-0 lead that would hold up to the break.

Kentridge would get on the board with 4:05 to play in the 3rd when QB Natano Woods found Jeremy Banks for a 5-yard touchdown pass, Elijah Mang added the PAT and the Chargers had their first lead of the game 7-6. The Chargers then got a safety when they forced Eagling to get rid of the football from his own endzone but he didn’t throw it near a receiver and resulted in a safety to extend the lead to 9-7.

As the game reached the 4th quarter the Chargers were just getting warmed up with Woods pounding in from the 4 yard line to push their lead to 16-6. The Raiders would answer that scoring drive with their second score when Eagling hit Brandon Campos on a 16-yard strike, the PAT missed and it was 23-12. The Chargers took over on their own 49 with 4:31 to play and marched right down the field scoring to get that touchdown right back when Woods found Ben Victoria in the endzone on a 7-yard pass play, the PAT was good and it was 30-12. Kentridge sealed the win when Jeremy Banks picked off Eagling and returned it untouched for a pick 6 to finish the scoring at 37-12.

With the win Kentridge is now 3-1 while TJ drops to 0-4. Our ESN Players of the Game went to the Chargers Natano Woods and the Raiders Damarion Davis.

(Lacey, WA) By the time Zach Webb caught Elijah McGee’s touchdown pass late in the 1st half for the Central Kitsap Cougars the game at Timberline was pretty much over. Usually teams try to schedule easy teams for their homecoming games but the Blazers instead welcomed the 3-0 CK Cougs and on a Thursday night on top of it. Timberline wasted little time in taking control of this one with the very first drive. The Blazers actually scored twice the first one was called back on a penalty but Timberline came back to take care of business with an 18-yard strike from QB Hunbter Campeau to Izaiah Jerenz. Mason Joubert booted the extra point and it was 7-0.

Campeau then took it in himself after holding the Cougs to a 3 and out. Campeau again drove the Blazers down the field in a methodical manner and capped it with a 1-yard plunge and Timberline led 14-0. Timberline took a 20-0 lead on a 20-yard pass from Campeau to JJ Graham, the kick failed and it remained 20-0. Timberline pushed their lead to 27-0  when Campeau again took charge blazing in from 38 yards, the PAT was good and the Blazers held a commanding 27-0 lead that would not be challenged.

CK would finally get on the board on the Webb TD catch from McGee. As the 2nd half began any hope of a Cougar comeback was snuffed out as Jerenz and Campeau  connected not one more time but two more on throws of 13 and 8 yards to take a huge 41- 6 lead. Central Kitsap would score a 2nd TD on an Alex Refilong 47-yard run to make the final score 41-13. Both teams are now 3-1 the ESN Players of the Game went to Timberline’s Hunter Campeau and for CK  Alex Refilong.