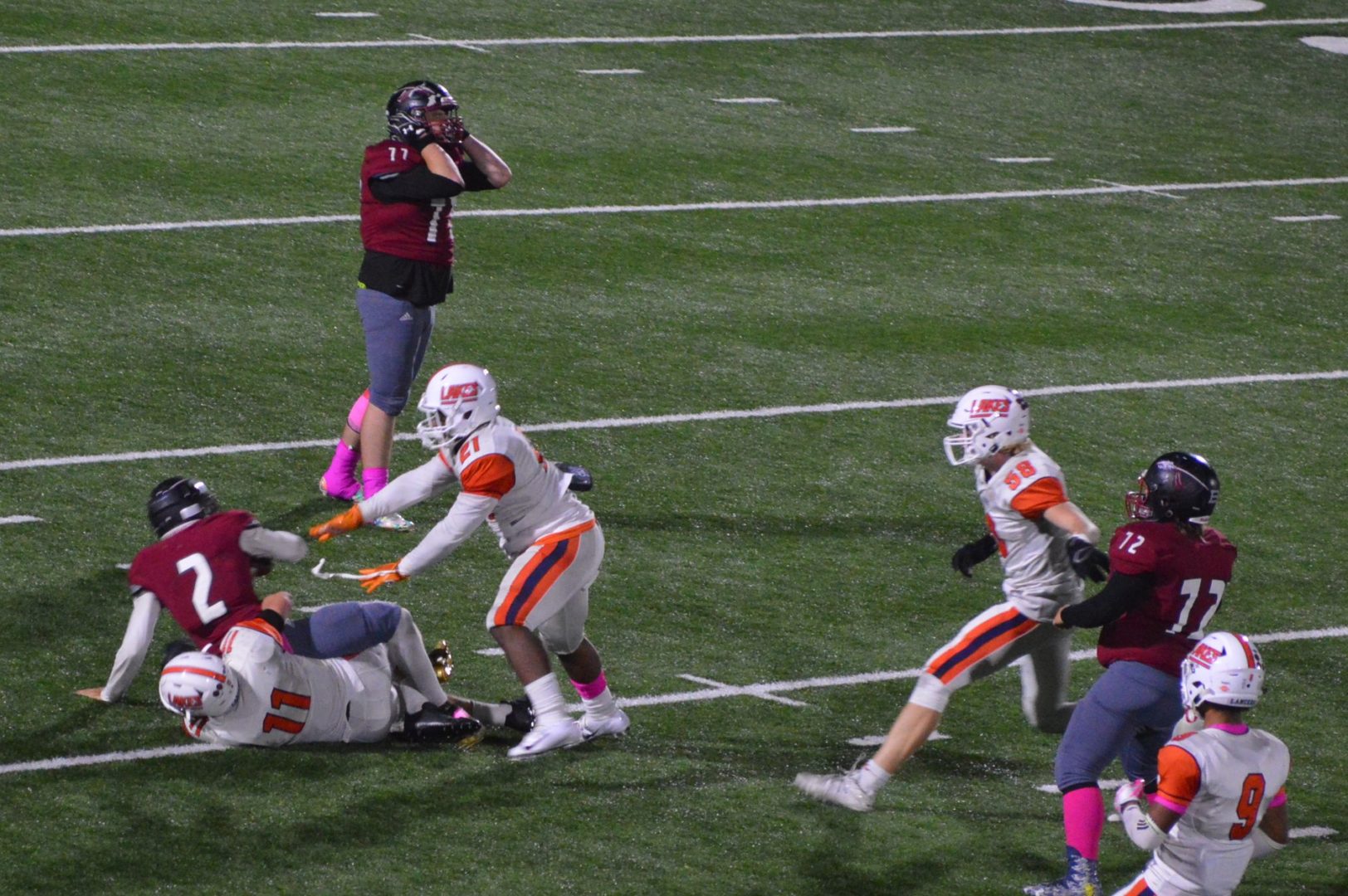 (Spanaway, WA) The Lakes Lancers are on quite a roll since losing their opening 2 games. In the grand scheme of things it appears Head Coach Dave Miller is doing it right, working out the issues and getting guys healthy and ready for the important league games. Miller says of course you want to win every game but if we are going to have hiccups let them happen in the non-league games. The 2 non-counting contests have set this Lancer team on the right track and they have been a bulldozer since racking up 186 points while giving up just 21 and going 4-0 to take charge of the PCL.

Bethel had been ranked 7th and were 4-1 overall while going 3-0 in the PCL and came into the game in a 3-way tie with Lakes and Lincoln. Lincoln takes on Stadium tonight to try and keep pace with the surging Lancers. The big showdown with the Abes and Lancers is in 2 weeks in the Lincoln Bowl. If the Lancers keep playing they have the Abes will have a lot to contend with and it will likely decide the PCL Championship.

In this game the Lancers got things started with a drive to mid-field but then Camyron Gaulke set the tone with a punt of all things as he rolled it literally to the 1-yard line. 3 plays later trying to get out of their own endzone Bethel’s Puka Sokimi tried to find a receiver around the 10 yard line where Lakes’ Rafi Mbuja stepped in front and snatched the pass and returned it for the touchdown. Liam Bladow kicked the extra point and it was 7-0 with 7:59 to play in the 1st. Lakes then expanded their lead after they forced the Braves to punt into the endzone and took over on their own 20. QB Liam Bladow would cap the 80-yard scoring drive with a 10-yard toss to Mbuja and it was 14-0 with 2:07 to go in the 1st.

The 2 teams knocked heads back and forth for the rest of the half until the Lancers punched one more in before halftime with the key moment coming on a trick play by the Braves. Sokimi pitched the ball to Will Latu who held up and went to throw it back to Sokimi who snuck out of the backfield to the near sideline. Latu waited just a half second too late as the Lancers Philip Riley broke on Sokimi and got there exactly when the ball arrived for the interception. Had Sokimi pulled it in he likely would have gone and the score woould have been 14-7 creating a whole diffent scenario than what ended up playing out. After taliking over on their own 31  Gaulke came in to relieve starting RB Khalil Lewis and pounded away at the middle of the Bethel defense and surged the final 6 yards to paydirt with just 1:40 to play but the PAT was wide so the Lancers went to the break with a 20-0 lead.

In the 2nd half, Jordan McCray got things going for the Lancers picking off one of 5 interceptions thrown on the night but the Braves held and forced just the 2nd punt of the night by Gaulke and he did it again as the booted ball checked up on the 8 yard line. DaeShawn Wayne then got into the act for the Lancers picking the ball and giving it back to their offense on the Bethel 11. On a 4th and 1 Gaulke piled into the endzone from the 2 and Lakes drew off to a 27-0. lead.

Bethel would answer quickly when Sokimi went 64 yards on a keeper around the left end off a play-action run. Sokimi hit the sideline and was gone. Cameron Schweyen added the PAT and it was 27-7. However, that would be as close as they would get as the Lancers answered with a 54-yard scoring drive with Devon Nofoa-Masoe running it in from the 9 to make it 34-7 and Bladow sealing the win with a 38-yard strike to Riley with 6:40 to play to go up 41-7. Bethel got a late touchdown on a pass from Sokimi to Pete Latu but it was a thorough win for the Lancers from start to finish.

Our Players of the game went to Lakes’ Philip Riley and the Braves Davauntae Holden who played tough from his defensive end position and likely led the Braves in tackles on this tough night. A few other shout outs are must in this game for the Lancers starting with their offensive line and defensive lines with Alan Fischer really standing out with at least 3 sacks in the game. Bladow was solid at QB and Bronson Pe’a caught some tough balls from his tight end position. For Bethel, David Shaulis delivered some big time hits and Josh Walker was impressive running the ball and on defense.

Lakes Philip Riley talks about the big win over Bethel