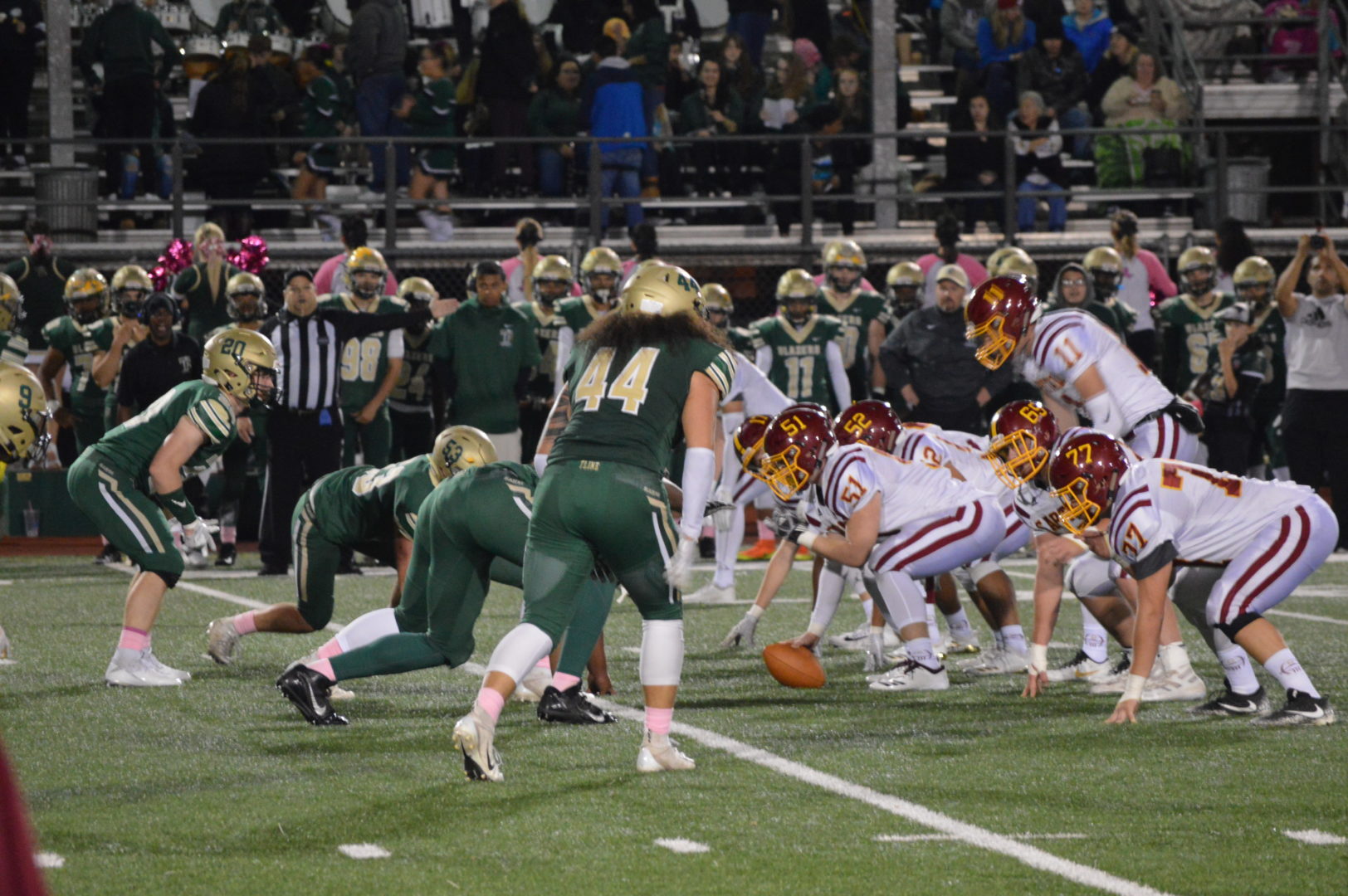 What a week in High School Football! Below is a conference by conference results with some original stories, links and pictures.

The SSC is now in a state of flux with a 3-way tie for 1st between Peninsula, Yelm and
Timberline all 4-1 and a 2-way tie for the 4th and final crossover spot between Capital
and Central Kitsap both at 3-2.

Timberline 34, Capital 14
(Lacey, WA) There were 2 big showdowns in the South Sound Conference on Friday night and when it was all over ended in a 3-way tie for first and 2 others in a battle for the 4th and final crossover bid. Yelm pulled away for a big win in the 2nd half at home against formerly undefeated Peninsula and Timberline followed the same game plan blowing out Capital with a smothering 2nd half defense.

The Blazers took the lead in the 1st 13 seconds of the game on the kick-off and they were the kicking team. Mason Joubert booted it deep and Trevon Moore scooped it up on the 8 and tried to get to the left side of the field for the old picket fence return. Moore was hit about the 18 yard line and the ball ping-ponged around and ended up on the 8 yard line when Timberline’s Noah Cunningham grabbed the loose ball and returned it for a touchdown. Joubert
added the PAT for a quick 7-0 lead.

Capital answered 2 possessions later when they took over on their own 29 and after a big run by QB Grant Erickson and Scott Penner finished it off with an 11-yard run for the touchdown, Penner added the extra point and it was tied 7-7. The Cougars would then take the lead for the one and only time in this game early in the 2nd quarter, a ling run by Eric Jackson set up a 14-yard TD pass from Erickson to Penner to go up 14-0.

The Blazers would get the equalizer before halftime on an impressive 77-yard drive and QB Hunter Campau scampered the last 5 yards to make it 14-14 and that’s how it would go into halftime.

Timberline would start with the  ball in the 3rd quarter again on the  23 yard line. The Blazers would go on an impressive 8-play, all running drive. It took about 3 minutes and was led by Jaden Gorman pounding away at the Cougar defense. Canpau then broke one off for 34 yards down to the 1 and  then scooted in over the goal  line for the  score and the Blazers re-gained the lead 21-14 never to give it up again.

While the Blazer offense would add to their totals and points with 2 more touchdowns on another TD run by Campau and then capped it with a 29-yard strike from Campau to JJ Graham to push their lead to  20, 34-14. It was plenty for a devastating defensive effort by the Blazers that held the Cougs to -11 yards total offense in the 2nd half.

Nose tackle Pele Maiava was a shut down monster in the middle of the offense and applied tons of pressure on Erickson when he dropped back to pass. Jamim Fa’Alogo was also as disruptive run blitzing and blowing up the option game that had been successful  in the first half for the Cougars.

The Blazers are now 4-1 and tied with Peninsula and Yelm and have already lost to Peninsula and will travel to Yelm on October 26. Timberline battles North Thurston next week in a crosstown rival. Capital now has their back against the wall to finish in the top 4 to advance to the crossovers as they host Central Kitsap next week which will likely determine 4th place and then finish at Peninsula.

Timberline finished with 290 total yards of offense including 160 yards of rushing, 3 touchdowns and threw for one. Capital finished the night with 133 total yards, 68 through the air all in the 1st half and 65 in the 2nd half. Our ESN Players of the Game for the Timberline Blazers Pele Maiava and for Capital 2-way starter at tackle Tate Smith.

There will be a battle for the PCL Championship next Friday with Lakes at Lincoln. Both are 5-0 in PCL league play. Bethel kept their Title hopes alive a game back but has to hope Lincoln beats Lakes and then Bethel runs the table with a win over Lincoln in the final week of the season.
Bethel 42, Stadium 21
Lakes 42, Spanaway Lake 0
Lincoln 53, Mt Tahoma 0
Wilson 27, Bonney Lake 7

The 2A Evergreen Conference is coming down to a crosstown rivalry next when Black Hills hosts Tumwater. The T-Birds are coming off yet another season they advanced to the State Title game last year and are looking to make another run. But the T-Birds are a bit beat up and remain a run dominated offense. Black Hills may have their best chance in years to knock off the green and gold with a well balanced offense and a hard hitting defense. It will be a
game not to miss. There will be a race for the final 2 spots in the crossovers with WF West likely one and the other 3 battling for the final spot.

The Hoquiam Grizzlies took control of the EVCO 1A with a huge win over Montesano to go 2-0. With only 4 league games and the Grizzlies big win 14-13 over Elma last week puts them in great position to clinch the top spot. If Forks can knock off both the Eagles and Grizzlies in their final 2 games could make it an interesting jumbled mess.

Central and Pacific 2B