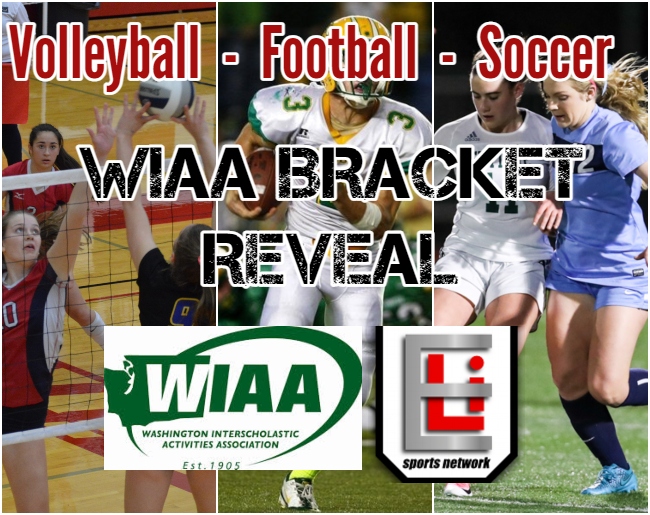 (Renton, WA) This Sunday on November 7th the State Selection Committees will meet in the morning to determine the seeding and 1st round match-ups for each of the State Volleyball, State Soccer and State Football tournaments set to begin next week. However in Volleyball it will be only the 1A, 2B and 1B tournaments which begin next Thursday in Yakima. The 4A, 3A and 2A classifications will hold their District tournaments this coming week and their tournaments are set for November 18-20 in Yakima.

The shows will air all separately on the ESN and NFHS Sports Networks. This is usually a subscription based view but the Bracket shows will be free to everyone, link to watch is below. The shows will begin at 11am with the Volleyball Bracket show and we will release the 16 teams seeded and their 1st round match-ups in the Sun Dome.

At 12-noon its the Soccer Bracket show and we will reveal the 16 seeds and their 1st round match-ups that will be played on Tuesday and Wednesday (Nov 9-10) at multiple locations. It will be up to the Athletic Directors to come to an agreement on day and time but the higher seed will be the host. The Quarterfinals will take place on Friday and Saturday (Nov 12-13) again at the higher seed. The Final 4’s will then be played the following weekend Friday and Saturday (Nov 19-20). The Final 4’s will be played at their traditional locations with the 4A and 3A at Puyallup’s Sparks Stadium, 2A and 1A at Shoreline Stadium and the B girls and B boys at Sunset Stadium in Sumner.

At 1pm we start the Football Bracket show and all 16 seeds will be released with the 1st round match-ups. Much like Soccer the 1st round and quarterfinals will be hosted by the higher seeds. This will also be the 1st year the 1B (8-man football) will have a 1st round prior to the quarterfinals. In year’s past there has only been enough teams to justify an 8-team tournament. Although they are not at the 16 team level yet they stepped toward that with a 12-team tournament this year. Their tournament will match the 5 thru 12 seeds playing next week with the losers out and the winner’s matching up with the top 4 seeds in the quarterfinals who will have a bye in the 1st round.

The Semi-Finals will be played at designated locations by the WIAA but they won’t announce those locations until the semi-final match-ups are set so they can try to place those games as close to each team as possible. The State Championships will again be played at 3 pre-determined stadiums with the 4A and 1B Championships at Mount Tahoma High School at George Nordi Stadium, the 3A and 2A at Sparks Stadium in Puyallup and the 1A and 2B title tilts at Harry Lang Stadium in Lakewood. There is a possibility of moving a State Championship game to the east side if two Eastern Washington teams end up matched against each other in the finals. The ESN crew will also welcome Scorebook Live’s Todd Milles to the broadcast and get his thoughts as we reveal the match-ups.

Again the shows this Sunday (Nov 7) are free to view for all. To watch got to www.elisportsnetwork.com and click on the broadcast schedule page and you will see the shows listed just click the link to watch and you will find the shows you want to watch. Get your Bracket Reveal show parties planned now and we’ll see you on Sunday!!