The Spring State Tournaments with a few exceptions all take place this Friday and Saturday all over the state. The exceptions are the state Golf tournaments underway today and finishing tomorrow and some Thursday event at both state Track meets. This makes it difficult for ESN to get top each state event and provide live streaming for those who can’t get to the games and events.

We’ll go through each sport we will be offering some kind of streaming and want viewers to understand our schedule and why we are doing it this way. You can go to our broadcast schedule page for a complete schedule.

We will stream all the games in each classification.

2B-1B at the Ridgefield Complex in Ridgefield
Friday are Semi-finals the 2B are at 4p and 7p.
Saturday the 2B 3rd place game is at 10a. The 2B State Championship is at 1p and the 1B title is at 4p.

For some perspective the only Fastpitch that has ever been streamed is the 2A tournament at Selah. That is when Selah High School had a very active Video Production class and they did most of the live streaming since it was at their school. The Selah class is no longer quite as active, much due to the Covid issue and kids had to stay home so Selah administrators are working to re-establish the program.

Since Fastpitch plays on 4 fields at the same time for us to be able to stream full tournaments we would need literally 20 sets of gear and 20 crews. We couldn’t do that even if we didn’t stream any of the Spring Championships. So this year we had hoped to live stream the Championship field at all 6 tournaments. We got close but we can only do 4 of the 6. Unfortunately the 4A in Spokane and the 1A in Richland we don’t have a crew to be at either location.

We know this is a bit confusing and if you do buy a subscription and your team never gets on you can request a refund from the NFHS. Despite the way we have to do this it is a step in the right direction with our goal being a camera on each field at every tournnament. We will love stream more fastpitch games than we have ever done in the past and again we know its not perfect but we are working toward that goal. 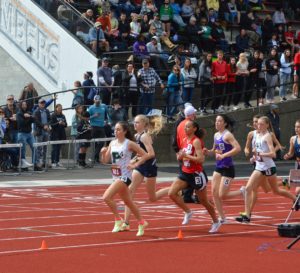 The Track and Field events are at 2 locations. We will stream all the running events on Friday and Saturday. We will try to get to some field events but we have just the 1 camera high above to get the races making covering field events very difficult. We also don’t know which order competitors may take their turn. We will be announcing all final results.

There are also a few events on Thursday at both venues but we don’t have crew available for Thursday so both locations will only be streaming on Friday and Saturday.

1A, 2B & 1B at Eastern Washington University in Cheney
Friday broadcast begins at 10:45am and on Saturday at 10:15am.

For those who don’t have a subscription we want to make sure if you are interested you totally understand how the NFHS subscription works. The cost is $10.99 and is NOT a pay per view but rather gives you full access to the NFHS platform for 30 days. All the live streamed games and events in Washington state and in fact all live streamed events in all 50 states. This is great for those with grandkids, nieces, nephews, cousins or friends competing in other states.

It also is good for any of the pixellot automated camera broadcasts that many schools now have n their gyms and stadiums. If they are on the NFHS network you can watch for the one price.

You also have access to literally millions of hours of on-demand events and games. On demand right now goes back to as early as 2011. However, the NFHS will soon be limiting the on-demand to just the past few years as storage of all those video files is becoming an issue.

The best thing about the NFHS subscription program is there is no contract and can be cancelled at any time. There are 2 subscription options the month-to-month for $10.99 a month or an annual 12-month plan for $69.99