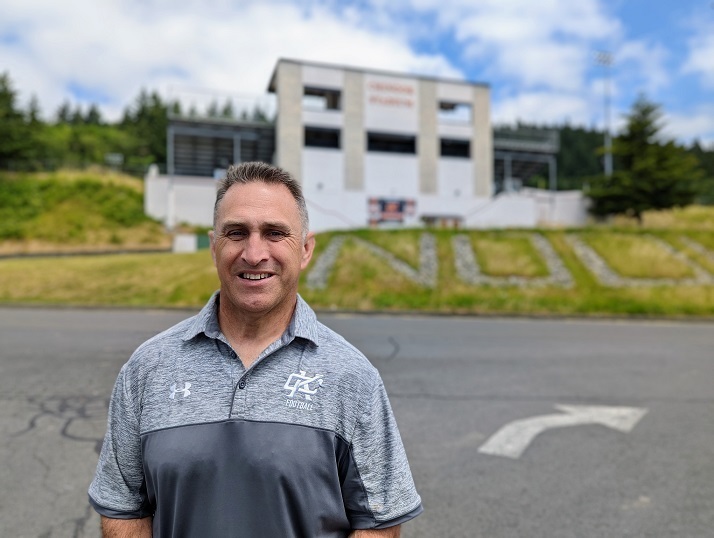 Growing up in southwest Washington and being around a lot of 2B football, I have become familiar with the culture of small towns and small town football. When I called to talk to the new Kalama football head coach and got no response, I just left a voicemail and waited for a call back.

When I checked my phone a little while later I saw that I had a voicemail. It was head coach Mike Phelps. He apologized for missing my call as he was busy butchering some turkeys. Right then I knew, this guy was going to be a perfect fit for Kalama and 2B football.

Taking over as a new head coach is always difficult. Whether you are in a new town and new people or if you’re promoted on the same team but now you’re the one in charge. When you take over for the defending state champions and a team that has been in four straight state championship games and won three of them? Well it’s nothing Mike Phelps is worried about.

“I’m ready for this. This is my home,” Phelps said.

Now Phelps didn’t play his high school career in Kalama. He didn’t even play in Washington. Phelps played his high school football career at Lebanon High School in Lebanon, Oregon. He also had a short stint playing at Western Oregon University but some time off before playing there made it difficult for him to get back into it and decided football wasn’t the route for him to take.

Instead, Phelps decided to take a much more important path. He would join the Marine Corps. He wasn’t done serving after that either as he joined the Multnomah County Sheriff’s Office where he would retire this past June.

He would be an assistant coach while also being a sheriff. Phelps returned home to coach at Lebanon High School for 12 years. Then in 2017 he would join Sean McDonald on the Kalama coaching staff as the team dropped from 1A down to 2B.

In that run the team would have a ton of success. Kalama won the state championship in 2017, 2018, and 2021 while finishing second in 2019 and fought through a tough Covid shortened season in the spring of 2021. Phelps recalled meeting with McDonald for the first time and how fired up it got them.

Of course they would win three of them together and Phelps said watching Sean he knew that to be a head coach he had to be in the building all day, every day. He credited McDonald with figuring a way to do just that and thought that played a big role in their success.

“Sean was around all the time and always making sure the players were doing what they should be doing,” Phelps said. “I think that is a very important component to coaching.”

Phelps also said he had to do some learning by himself. He had to constantly learn how he could be a better coach and improve what he was doing to not only improve the team but improve himself as well.

In 2021 it was announced that Sean McDonald would be leaving Kalama and was looking to continue coaching elsewhere. Phelps thought that the timing wasn’t right and pushed to keep McDonald on the Kalama sideline. Phelps said he was happy being an assistant and McDonald was too good of a coach to let go.

“It wouldn’t surprise me at all to see Sean coaching college football one day,” Phelps said. “He is that good and that knowledgeable.”

McDonald would stay for one more year and the Chinooks would win the state title. However, McDonald moved down I-5 to take the head coaching job at Woodland High School. Phelps decided since he retired, now was the time to make the jump to being a head coach. He was grateful for the whole process and credited Kalama Athletic Director Kevin Wright with a smooth process.

“Kevin is a great communicator. He runs a very smooth operation,” Phelps said.

Since he is now retired, Phelps says he can devote all his time to the program and there was no other program he would want to be with more than Kalama. The passion and support the community has for the high school and athletics is unmatched and blows him away every time.

“The first time we got to the Tacoma Dome, I looked around and there were 2,000 people there. I couldn’t believe it.”

Now the focus has shifted to the upcoming season. Kalama lost their top four receivers, starting running back, four starting offensive linemen, almost their entire defense, and of course one of the top quarterbacks in the state over the least three seasons.

When talking about the rest of the league, Phelps noted how there are some tough teams as always. He talked about having a ton of respect for Napavine Head Coach Josh Fay and the program that he has built for not only the high school but for the middle school and youth as well. He also noted that Adna has a lot of young talent and also praised them for having the best sportsmanship of any of the teams that he has faced. Phelps also talked about being excited play against Onalaska as the teams always play each other tough and find themselves facing off in the playoffs.

“There is a lot of history between our schools especially in the last few years starting with the (2019) state championship,” Phelps noted.

Of course one of the most intriguing games on the schedule is in week one when Kalama hosts their former head coach Sean McDonald and the Woodland Beavers. It was a perfect storm as Phelps gets to face the guy he was an assistant for in his first game as a head coach.

“It’s a Thursday night game so a lot of people will be watching,” Phelps said. “It is just a shame that somebody has to lose but that’s football.”

For Phelps it is a fresh start with fresh faces that will be around for years to come. He noted the quarterback battle between Aiden Brown and Ethan Lightbill as a fun competition for who could be the next in a line of very successful quarterbacks in Kalama.

Coach Phelps also talked about wanting to put his stamp on the culture in Kalama. He wants to make everyone feel welcome to play football whether that be boys or girls. Phelps doesn’t want to just leave a stamp on the football program, but on the community as a whole.

Phelps talked about the importance of grades and being a positive representation of the Kalama football team and the Kalama community. While coaching his kids to be successful football players is important, he cares about coaching his players to be good people just as much.

“Football is amazing. But if I can coach them and teach them things beyond the football field, that is pretty awesome too.”

Kalama will open up their season on September 1st hosting Woodland.