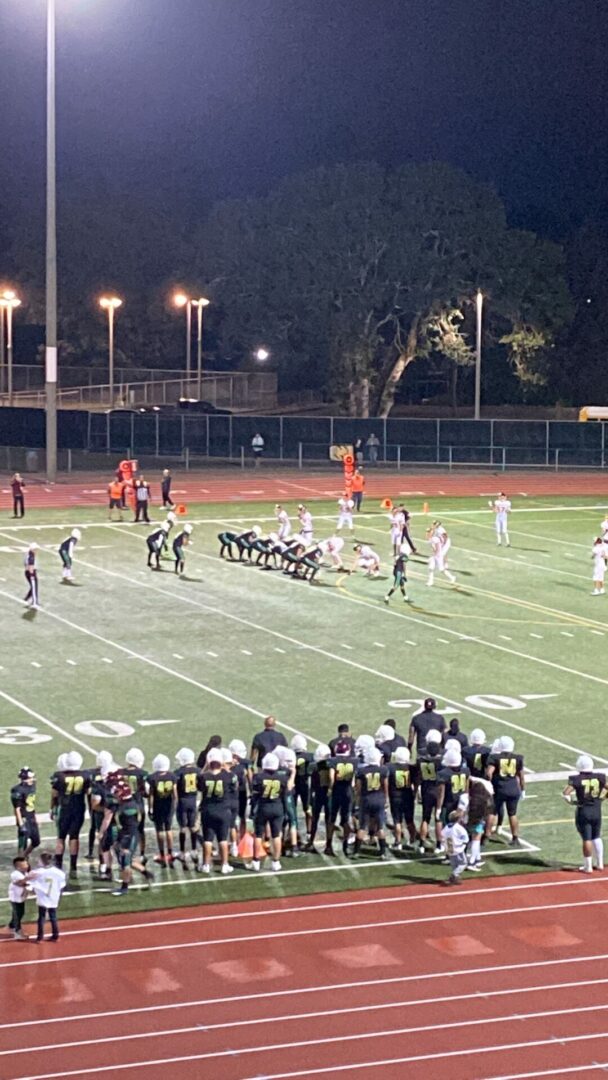 (Lakewood, WA) After an unexpected bye week in week 2, the Clover Park Timberwolves got back on the field Thursday night and it was well worth the wait for the T-Wolves. Hosting a White River team that they had not beat since 2010, the Clover Park defensive line shutdown the Hornets ground game and the offense came up with enough explosive plays to give Clover Park their first win of the season, 20-0.

White River came into the game 1-1 as they looked to bounce back from a loss to Shelton. It was the SPSL 2A league opener for both teams and with a lot of questions about the middle of the pack in the league, it was important for both sides to get off to a good start under the Thursday night lights.

Clover Park started with the football and immediately took their first big shot. Senior quarterback Sione Pe’A dropped back on the first play of the game and took a downfield shot to wide receiver Issaac Lavelle. White River would be flagged for pass interference but it wouldn’t matter. Lavelle would haul in the pass for a 34 yard reception to get things rolling for the T-Wolves. Before long Clover Park was inside the 5 yard line but would face a 4th and goal. Pe’A rolled to his right to pass and tried to find Jaden Daniels in the back of the endzone but the pass would fall incomplete. The Hornets came up with a big stop for a turnover on downs.

White River got some breathing room but would still be forced to punt on their first possession. This time it would be Clover Park getting flagged for offensive pass interference, taking away a phenomenal catch by Zakai Abdullah. Running back Deshaun Castro and a couple of penalties helped the T-Wolves turn a 1st and 25 into a first down at the White River 49 yard line. Head coach Jason Nikolao decided it was time to take another shot and Sione Pe’A would oblige by dropping a dime to Abdullah for a 49 yard touchdown for the first score of the game and the only score of the quarter. After one quarter of play, Clover Park had a 6-0 lead.

The Hornets would make a change at quarterback on their next possession as junior Aaden Rathbun took over for Jacob Rennaker. Rennaker would stay in the game but the coaching staff liked him more at wide receiver. It was the right call as Rathbun completed back-to-back passes to Rennaker for a total of 31 yards. Rathbun then sailed one just a tad high and Tyger Willingham would make him pay as he intercepted the pass to put Clover Park’s offense back on the field. The White River defense did their job though and forced a T-Wolves punt.

After a punt by White River, the Clover Park offense would start with the ball on their own 5 yard line on their next drive. A ground and pound attack would work wonders for the T-Wolves as they marched the ball right down the field. Deshaun Castro and Jaden Daniels had three carries of 20+ yards on the drive and the one by Daniels was a lot more as he had to go sideline to sideline and back to the other sideline again. With under a minute left in the half, Castro would finish off a long 95 yard drive with a four yard touchdown run. The fantastic drive gave Clover Park a 12-0 lead at halftime.

The Hornet offense would get the ball to start the 2nd half but once again the Clove Park defense came up with the big play. The Timberwolves forced a quick punt to get their confident offense back out on the field with momentum. That momentum took a big blow when Sione Pe’A was injured and had to come out of the game. Backup quarterback Kevin Parker would enter the game and the Clover Park offense would not skip a beat. Parker and Jaden Daniels helped lead the offense on another methodical march down the field and get the T-Wolves inside the 10 yard line. Fittingly, Parker would find Daniels for a nine yard touchdown pass to extend the lead. After Daniels went airborne on a broken PAT attempt and got the two point conversion, Clover Park had a 20-0 lead.

White River had to score on their next possession to try to take some momentum back and Rathbun would have them marching. An issue with a snap caused a fumble that would put an abrupt end to that White River drive and an interception by Clover Park’s Zakai Abdullah on the following drive put the finishing touches on a shutout win for the Timberwolves.

For White River, Chase Campbell had just two carries but had 10 yards on the ground and a sack on defense. Aaden Rathbun went 10-20 through the air for 101 yards to five different receivers. Jacob Rennaker led the way receiving with three catches for 35 yards while Lyle Dolojan had five catches for 30 yard. Tyler Roach added two catches for 10 yards, Tyce Donovan had a 17 yard reception, and Landon Mollett had a nine yard catch. Both Trevor King and Nolan Luckow also added a sack defensively.

Clover Park moves to 1-1 with their first win of the season and will look to keep the ball rolling next week when they travel to take on the Washington Patriots next Friday. White River drops to 1-2 on the young season and they will visit the Orting Cardinals on Thursday.

If you want to watch the replay of the Thursday night action you can do that on the NFHS network On-Demand. Subscriptions are $11.99 per month and gives you access to the entire NFHS Network all across the country to watch the live broadcasts or any on-demand games. Literally hundreds of thousands of hours of game content. Go to https://www.nfhsnetwork.com/affiliates/eli-sports-network to sign-up if you don’t have a subscription or to find the on-demand replay of this game.