The EVCO 2A has been a 2 horse race for several years and although the other teams are making big steps it looks like it will be down to these two teams again this year. Both the T-Birds and Bearcats put up big wins on Friday night and they will face off next Friday at Tumwater District Stadium. Below we have coverage of both the WF West win over Black Hills and the T-Birds victory at Centralia. Video Highlights also included.

(Tumwater, WA) WF West came into Tumwater District Stadium with a 2-1 record with the lone loss to the defending state champions Lynden. Black Hills was 3-0  but had several injuries at the wrong time facing the Bearcats. 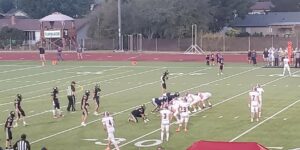 The Wolves would drive down the field but stall and attempt a 31-yard field goal that ended up short. The two teams would then battle back and forth with none able to put points on the board for most of the 1st quarter.

The Bearcat offense would get rolling late in the quarter led by QB Gavin Fugate who would show off is arm early spreading the ball around to all his receivers. WF West would finally get in the endzone when Fugate hit receiver Cameron Amoroso that would catch a touchdown from Fugate with under a minute to play in the first quarter.

That touchdown opened the flood gates for the Bearcats who would score on their next three possessions in the half with Fugate running one in, hitting Gage Brumfield from 18 yards out and Tucker Land punching one in from a yard out with 28 seconds to play in the half. Black Hills would show flashes with big plays from QB Jaxsen Beck and WR Maddox Hodge but the WF West defense was unrelenting holding the Wolves to 100 yards at the half. 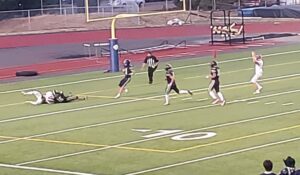 Black Hills came out of the half with a spark after Tanner Parkenson pulled off an onside kick but that spark wouldn’t catch and the Wolves would punt 3 plays later. WF West scored on their next possession with Fugate and Amoroso connecting again making it 35-0 with 7:22 to play in the 3rd quarter. That would be the last official touchdown of the game.

On Black Hills last play of the game the would bring out Tanner Parkinson to attempt a 45 yard field goal. The snap would get away from the holder and Parkinson scooped it up and threw the ball down field finding senior OFFENSIVE LINEMAN Hank Spray who would break tackles and get into the endzone but being an offensive lineman he was an illegal receiver and it didn’t count but man what a run.

The WF West Bearcats are now 3-1 overall and 2-0 in EVCO play. They face Tumwater next week. Black Hills heads to Aberdeen with a 3-1 record and 1-1 in league play.

Our Thorbecks MVP went to the Bearcats’ Cameron Amoroso.

WF West hits the scoreboard late in the 1st

(Centralia, WA) The Tumwater T-Birds improved to 4-0 with a one-sided win over the re-building Centralia Tigers. It took a little bit for the T-birds to get rolling as the Tiger defense held the high powered offense to just 7 in the 1st quarter. But once the T-Birds got rolling they rolled up a big lead of 35-0 by the half. The T-Birds will host WF West next Friday in may very likely determine the league Champion.

Centralia drops to 0-4 on the year and travels to Rochester next week. For a full re-cap of the game click on our ESN Post game show below followed by some game highlights.

Tumwater adds to their lead with this 31-yard strike

Centralia with the halfback pass to avoid the shut-out