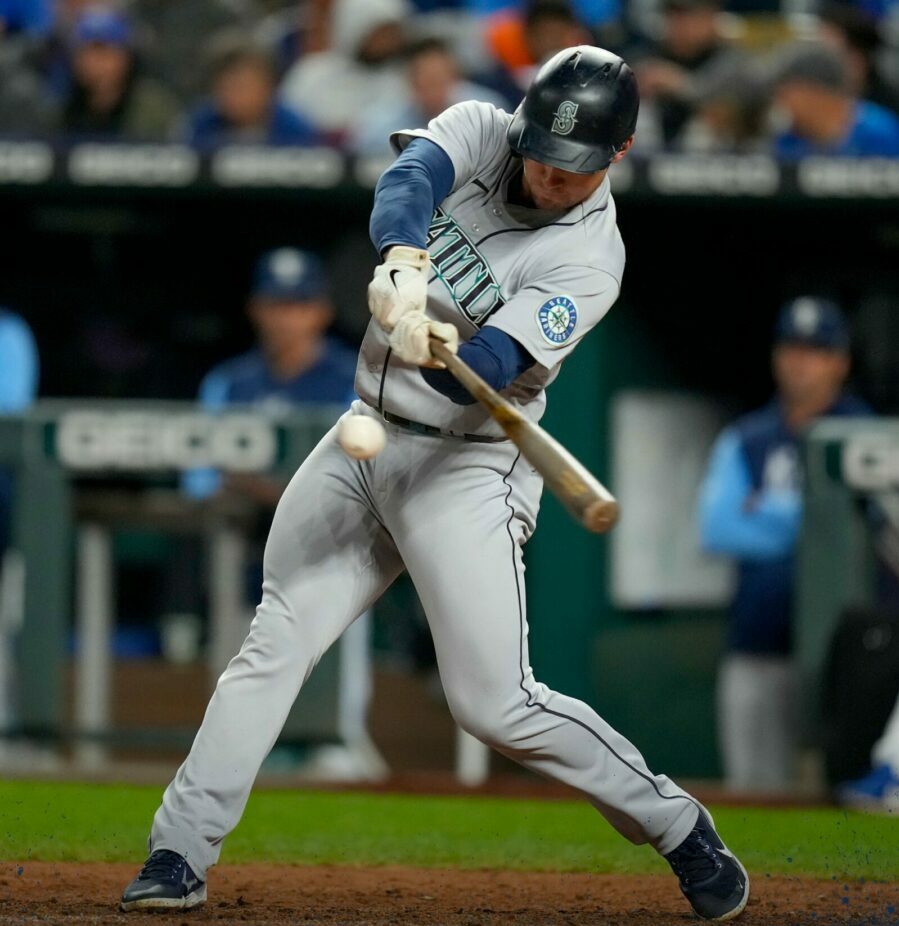 (Kansas City, MO) A few weeks ago, the Mariners had this part of the schedule circled as an opportunity to run away with the Wild Card against some weaker teams. Instead, their lead in the American League Wild Card has dwindled down to just a three-game lead over the Baltimore Orioles as the Mariners dropped the opening game of their three-game set in Kansas City. Once again, a lack of offense cost the team against a bottom tier team.

This game would get off to a solid start for the Mariners. In the top of the 2nd, Cal Raleigh stepped up with one out and he climbed within one of the single season home run record by a Mariner catcher. Raleigh hit his 24th home run of the season with a solo shot to give Seattle the lead 1-0.

The lead was then taken away by Kansas City not long after that. In the bottom of the 3rd, Hunter Dozier hit a double on the first pitch of the inning to put the tying run in scoring position. Dozier would move to third on a groundout and would then score as Nate Eaton singled to center to tie the game at 1-1. An error in center by Jarred Kelenic allowed Eaton to reach second with just one out. MJ Melendez snuck a grounder to left field to drive in Eaton to give the Royals a 2-1 lead.

The bottom of the 5th would see that lead grow for the Royals. Melendez led off with a single to bring up the Royals rookie star in Bobby Witt Jr. Witt Jr. would then lace a double to center for his 30th double of the season. Melendez scored from first and the Kansas City lead was now 3-1. Salvador Perez moved Witt Jr. to third with a groundout and Vinnie Pasquantino would drive him in with an RBI single to left to make it 4-1 Royals.

Pasquantino wasn’t done yet. After two quick outs in the bottom of the 7th, Salvador Perez doubled to left for his 21st double of the season. Pasquantino then got another RBI single to left and Perez would score to extend the lead to 5-1.

The Mariners would not be able to find another run as they dropped the opener in Kansas City 5-1. Despite having a leadoff baserunner in six of the nine innings including three doubles, the Mariners could only muster one run on a solo home run. Marco Gonzales wasn’t his best but still gave the team a shot to win after five innings allowing eight hits and four runs, three earned, no walks and two strikeouts.

Seattle (82-68) now only has a three-game lead over the Baltimore Orioles for the final Wild Card spot. The magic number is still nine after Baltimore beat Houston once again on Friday night. The Mariners are behind both Tampa Bay and Toronto by 1.5 games, which still gives them a window to move up. Game two between the Mariners and Kansas City Royals (62-89) is scheduled for Saturday at 4:10pm. Logan Gilbert (13-6, 3.13 ERA) will look to stay hot and the M’s need him to as he takes on a struggling Kris Bubic (2-13, 5.81 ERA) for Kansas City.

While the M’s are just three games ahead of Baltimore, they do own the tiebreaker over the Orioles. That makes that lead actually four games since teams that are tied will not play a tiebreaker game anymore. The tiebreaker will be determined by head-to-head records. The Mariners won the season series with Baltimore 4-2. With that being said, game two in Kansas City is a must win. That is all for now.