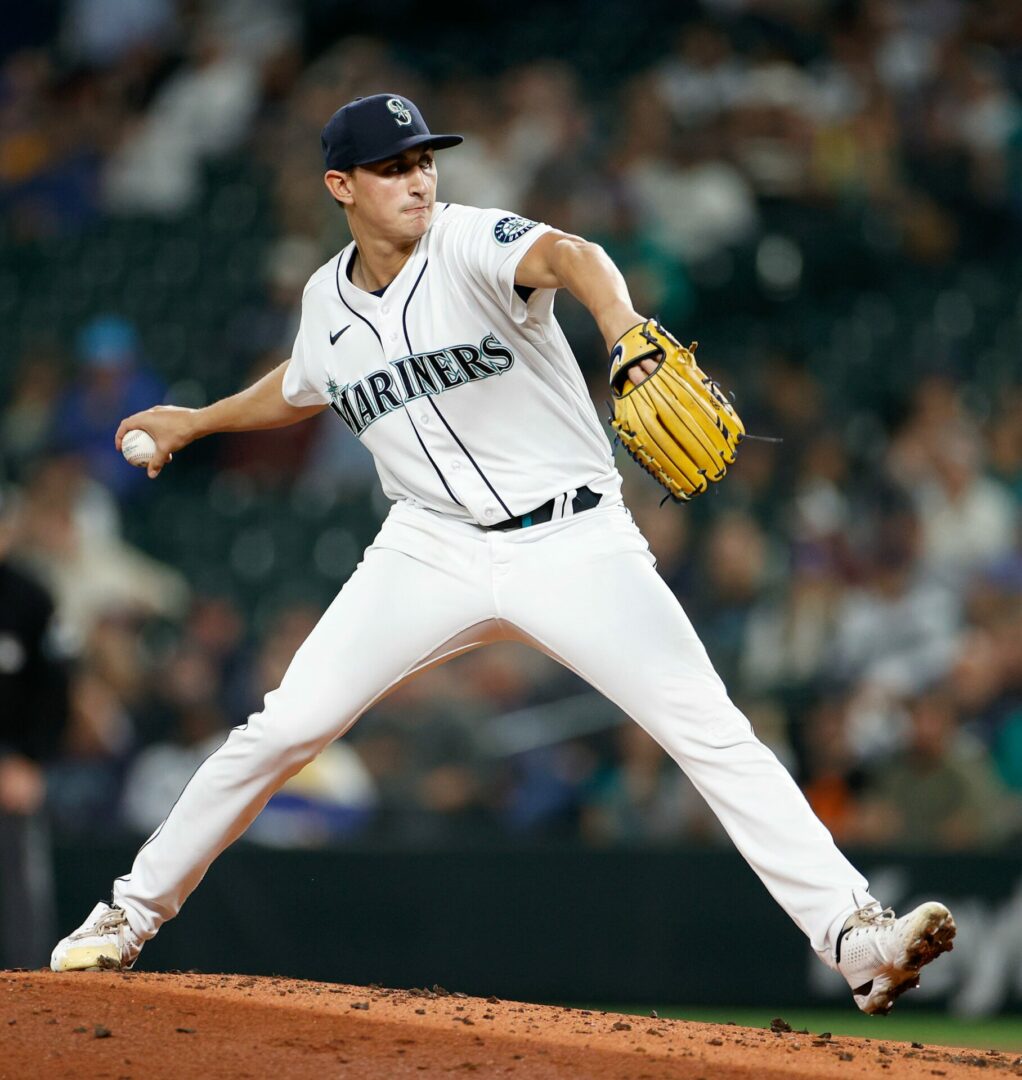 (Seattle, WA) Right as the Mariners game was getting underway, the score was going final in Boston as the Baltimore Orioles lost to the Red Sox to drop the Mariners magic number to four. George Kirby was needed and the worst outing of his young career, we were going to learn a lot about the young Mariners starter and how he handled adversity. Kirby passed the test with flying colors as he settled down after some first inning trouble and shutdown the Texas Rangers while the bats did enough to give the Mariners a 3-1 win.

The top of the 1st had Mariner fans worried once again. With Corey Seager out of the lineup for Texas after being hit by a pitch on Tuesday, Nathaniel Lowe moved up to hit second in the order and would reach with one out with his 26th double of the season. J.P. Crawford would then make a nice snag at short on a line drive that Crawford would snag just before it hit the ground. Josh Jung continued to beat up on the Mariners as he grounded one up the middle for a base hit. Lowe scored easily to make it 1-0 early in favor of the Rangers.

That deficit wouldn’t last long as Seattle struck in the bottom of the 1st. The M’s tried a new approach by having the team show up late, not worry about batting practice or infield work. They showed up and went out and played baseball. The lineup looked different too with Dylan Moore leading off and drawing a walk to start the inning. Ty France reached on an infield single after Josh H Smith dove just to keep the ball on the infield. Eugenio Suarez then sparked the T-Mobile Park crowd as he drove one deep to center field that just landed short of the wall. Moore scored easily while France stopped at third as Suarez’s 24th double of the season tied the game at 1-1. Mitch Haniger would give Seattle the lead with a sacrifice fly to center field to score France and make it 2-1 M’s.

In the bottom of the 3rd, Seattle would add on against the Rangers ace Martin Perez. Ty France recorded his second hit of the game with a shot up the middle. Eugenio Suarez followed suit with a single to left to put runners on first and second with nobody out. Mitch Haniger loaded the bases with a walk and Carlos Santana coming to the plate. Santana would do enough with a groundout to Smith at short that would score France while Santana was thrown out making it 3-1 Seattle. A couple of flyouts ended the inning but the Mariners still increased their lead.

George Kirby had the bounce back outing that he needed after getting off to a rocky start in the first and pitching out of trouble in the third. The young right-hander rolled through six innings with only five hits and one run allowed while walking one and striking out four. It was the kind of performance that shows he can be a top of the rotation guy and put a bad start behind him. Adding another top of the rotation caliber guy to a stacked rotation gives the Mariners one of the best rotations for years to come.

While the offense couldn’t add on any more run support, it wasn’t needed. The trio of Erik Swanson, Andrés Muñoz, and Paul Sewald retired all nine Ranger batters they faced out of the bullpen with three strikeouts to get the Mariners a 3-1 win in front of thousands of fans and dogs for the final Bark at the Park night.

With the win and the Baltimore loss, the Seattle Mariners (84-70) now have a magic number of just 3. That means any combination of three Mariners wins and Orioles losses will send the Mariners to the playoffs for the first time since 2001. The Mariners are also just half of a game behind the Tampa Bay Rays for the second Wild Card spot and two games behind the Toronto Blue Jays for the top Wild Card spot and a home playoff series. Seattle will wrap up the three-game and season series with the Texas Rangers on Thursday at 6:40pm. Marco Gonzales (10-15, 4.05 ERA) will try to build himself some momentum heading into the playoffs against Jon Gray (7-7, 3.64 ERA) for the Rangers.

This is what we all wanted! The Orioles losing is nice (sorry O’s fans, we’re still friends) but having the Mariners win and handle some things themselves too is great. Kirby was Kirby again in this outing and Suarez just missed send the crowd into a frenzy on the double in the first that just missed being a home run. Geno looks really good at the plate which is great to see and him reportedly playing third in the finale is perfect. Ty France is getting hot too so hopefully we start seeing some sparks in the offense before Julio comes back ready to set the world ablaze. Three. We are three outcomes away from the playoffs. Three.