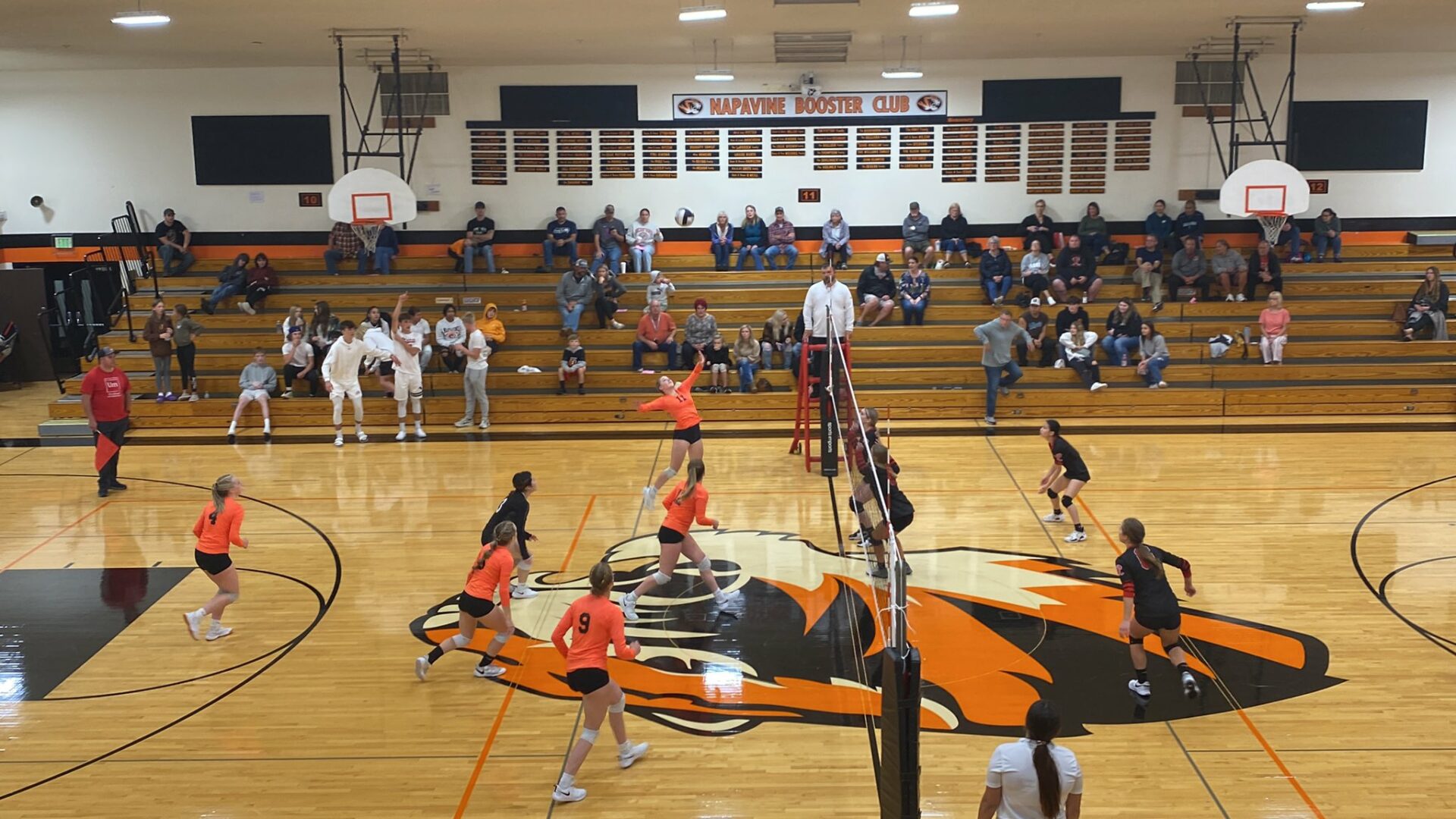 (Napavine, WA) A Wednesday night showdown between the undefeated Raymond Seagulls and the Napavine Tigers ended up being a contender for 2B match of the year. Raymond came into the matchup undefeated while Napavine had lost two of their last three including being swept the night before against Adna. After falling behind 2-0, Raymond battled back to force a fifth set, but the Napavine Tigers hung on for a 3-2 win.

Napavine roared out to an early lead in the opening set. Avery Schutz served three straight points for the Tigers to give them the very early 4-0 lead. Raymond would immediately counter with four straight points served by Kyndal Koski to put Raymond out in front 5-4. Both teams traded points for a little while after as Morgan Hamilton and Keira O’Neill took control for the Tigers while Karsyn Freeman and Alia Enlow battled back for Raymond. Things would shift when Jessie McCoy served four straight points to widen the Napavine lead to 11-7 as the teams started trading points again. Avery Schutz would then serve three straight with Keira O’Neill continuing an impressive showing up front. An ace by Grace Gall was part of her three straight points as Napavine pulled away in the first set 25-14.

The second set was taken over by Napavine early. There were some very fun rallies but it would be the Keira O’Neill show in more ways than one. Thanks to tremendous backline play by Emily Kang and Avery Schutz, O’Neill controlled the match at the net. Grace Gall did her part from the service line by serving eight straight points for the Tigers to put them ahead 10-1. The trio of O’Neill, Jessie McCoy, and Morgan Hamilton rolled up front and gave Napavine a dominant 25-10 win in the second set.

The third set was extremely back and forth in the early stages. Megan Kongbouakhay for Raymond and Jessie McCoy for Napavine shared the wealth as they set up their teammates very nicely from their setter positions. Morgan Hamilton served three straight points for Napavine to give them the 12-7 advantage. Raymond slowly chipped away as Caton Swogger caught fire for Raymond and helped cut the deficit to 16-17. With Napavine up 20-19 things changed quickly. Ava Baugher served four straight points for Raymond to put the Seagulls up 23-20. They would ride that wave of momentum as they avoided the sweep taking the third set 25-22.

The fourth set would once again be back and forth to start, but four straight points served by Jessie McCoy for Napavine had the Tigers in front 9-3. That would be immediately countered by Kassie Koski serving five straight for Raymond as they evened the set up. A big block at the net by Keira O’Neill fired up the Napavine side as they pulled ahead 15-10. Once again, Raymond slowly started chipping away and cut it to 21-19. Emma Glazier came in as a sub and it paid off for head coach Julie Jewell as the freshman served four straight points for the Seagulls and gave them a 24-21 lead. Emily Kang caught fire however and tied things up at 24-24 and even gave the Tigers a 25-24 lead. Of course, you have to win by two in volleyball. Raymond would finish off the fourth set with Alia Enlow serving the last two points to make it 28-26 and send us to a fifth and final set.

Intense is an understatement to describe the final set. Raymond came out rolling and built a 5-1 lead  with Alia Enlow serving three consecutive points. Napavine chipped that lead away quickly and Jessie McCoy would actually give the Tigers a 9-7 lead. From there on, it was Emily Kang flying around and Morgan Hamilton, Kierra O’Neill and Jessie McCoy controlling the tempo and controlling the net as Napavine pulled away winning the fifth set 15-9 to take the match 3-2.

Our Thorbeckes MVP of the match was Napavine’s Emily Kang who recorded a game high 33 digs while also being valuable from the service line. When you look at the number of digs Kang had, don’t forget to factor in that she had to throw herself around for a good chunk of those. It was a wild and extremely impressive performance for the sophomore.

Napavine moves to 4-2 on the season with the non-league win and will have their third match in three days on Thursday at 7pm when they host Winlock. Raymond loses for the first time this season and drops to 7-1 this season. The Seagulls will try to bounce back on Tuesday when they host South Bend.

Napavine Starts to Pull Away

Keira O’Neill Does it All