HS Football: Crossover Week! 4A and 3A Result 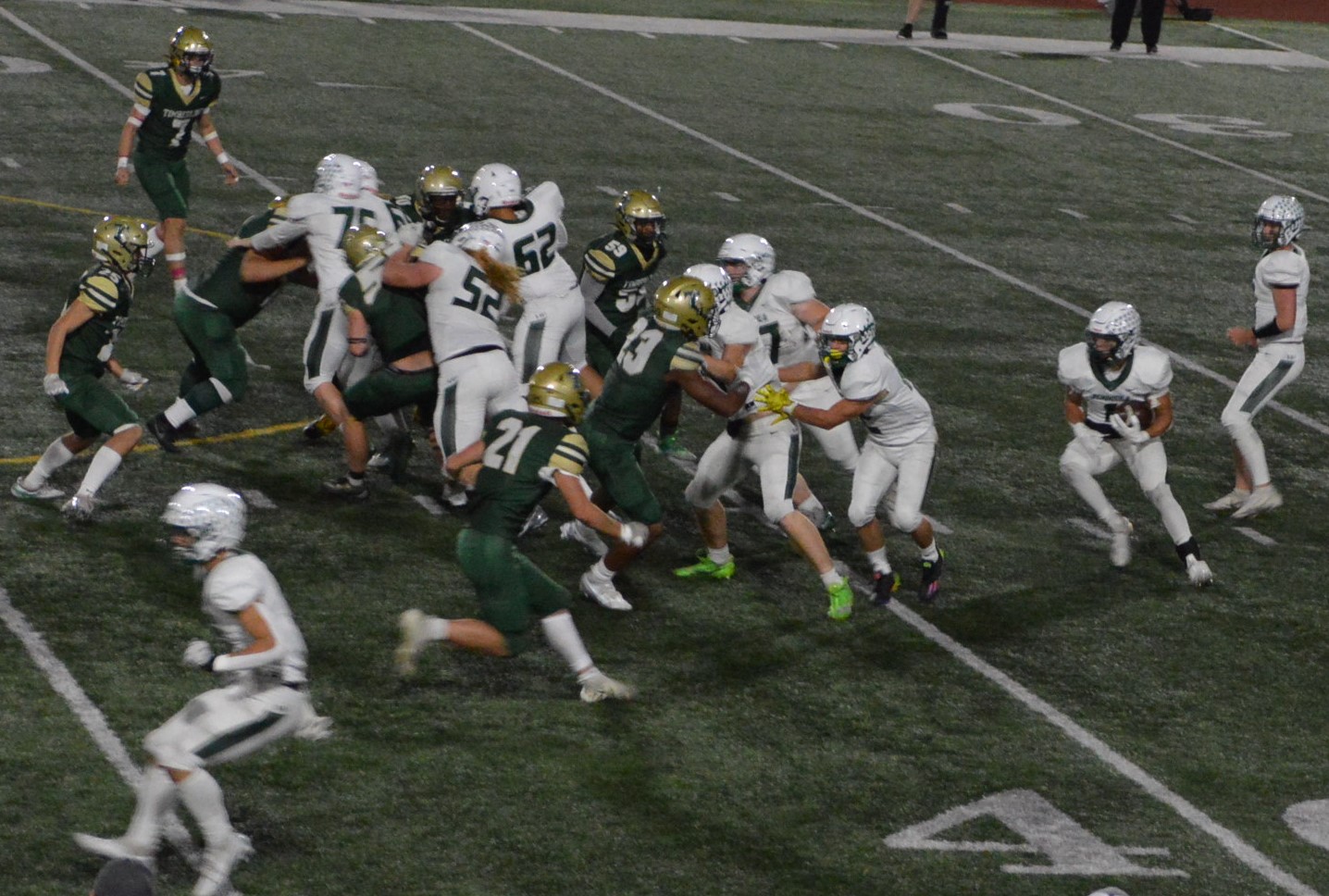 Here are the final scores from the 4A and 3A Crossover games with the winners moving on to the State Tournament and losers out. We have added some limited re-caps and  or video highlights on the games ESN covered and those are at the bottom of each list.

Mount Si came out fired up and did not take long to make their mark on the 4A crossovers. On just the second play from scrimmage, junior running back Beau Phillips took a handoff 64 yards for the opening score of the game. After a two-point conversion, the Wildcats had the early 8-0 lead.

It looked like we were in for a high scoring shootout after the Graham-Kapowsin offense took the field for the first time. The rain didn’t seem to affect Eagle quarterback Daveon Superales as he and Jabez Woods connected on a couple of passes to move the ball down the field. It would be fullback Mikey Toa doing the rest as he punched his way into the endzone for a one-yard touchdown to make it 8-7.

Beau Phillips and Jasiah Willis had the Wildcat offense marching once again. The ground and pound style of the Wildcats wore down the Eagles. Even a fumble by the running game was recovered by Mount Si. A penalty backed them up and forced them to air it out and that would be the opening Graham-Kapowsin needed. Demetrius Taape jumped the route and picked off the Mount Si pass. Taape took the pick 70 yards to the house for a pick six. G-K had taken the lead at 14-8.

The offenses both stalled after that. A great punt by Mount Si and a bend but don’t break defense for G-K kept both teams off the scoreboard for the remainder of the half.

In the 2nd half, it was all Graham-Kapowsin. Daveon Superales threw a touchdown pass to Kris Norris and Mikey Toa took over on defense as he and the rest of the front seven of the Eagles shutdown the rushing attack of Mount Si. Toa added a couple more rushing touchdowns to give him three on the day as G-K ran away in the second half for the 35-14 win.

Superales went 8-11 through the air for 128 yards and a touchdown while adding three carries for 18 yards. Jabez Woods hauled in six catches for 106 yards in another impressive performance by the junior. Our MVP of the game was Mikey Toa who had eight carries for 31 yards and three touchdowns. Toa also dominated on defense to slow down the Wildcats rushing attack. Demetrius Taape recorded two interceptions with one being returned for a touchdown. Jalen Davenport mixed in a sack on defense with his 33 rushing yards. Levi Turner and Nyzaiah Atinsola also split a sack on defense.

Kennedy Catholic 50, Kamiak 8
The Lancers were ready to come out hard and did so in all aspects including special teams and on this play taking a punt to the house.

(Puyallup, WA) The Emerald Ridge Jaguars made history on Saturday afternoon by punching their ticket to the State Playoffs for the 1st time in school history, and they did it by dominating one of the most consistent programs in 4A in a 41-14 victory over Bothell at Sparks Stadium.

Emerald Ridge had a picture perfect start, scoring on an Elvis Kariuki blocked punt that Jacob Lane scooped up and ran back for 15 yards for the TD just over a minute in to the game.

The Emerald Ridge defense forced 4 Bothell interceptions including one by Logan Lisherness who also had two consecutive rushing TD’s, including a 45-yard burst that made it 21-0 Emerald Ridge.

Emerald Ridge took a 35-0 lead at halftime as Jake Schakel tossed a pair of touchdowns to Tony Harste for 31 yards and Gio Kafentzis from 4-yards out.

Bothell played much better in 2nd half as the Cougars actually outscored the Jaguars 14-7 behind 3 forced fumbles two of which were recovered by Bothell. Bryce Kooy and Ahmani Hopoi each had short rushing TD’s for the Cougars in the 2nd half.

Jake Schakel was efficient in the win at QB for the Jaguars going 18-22 for 193 yards and 3 TD’s. Tony Harste his best stat lines with 8 catches for 118 yards and two touchdowns, while Kafentzis brought in a TD on 5 catches for 41 yards.

Emerald Ridge now has 8 wins for the 1st time since 2014 as the 8-2 Jaguars move on to the State Tournament. Bothell ends the season at 4-6, their only losing record since Maxpreps.com began keeping track in 2004.

The Jags pile on a big 1st half

Lincoln 62, Marysville-Pilchuck 31
The Abes and Tomahawks looked like it was going to be a battle of defenses with a driving rain and swirling wind but instead the teams busted out big play offenses. Early in the 4th quarter the Abes led by just 10 41-31 as they could not shake a pesky Marysville-Pilchuck squad.

But there was no stopping Missouri commit Lincoln’s QB Gabarri Johnson ran wild scoring 5 rushing TD’s and threw one as well. Just when M-P would stay within 10 points, Johnson was always the answer like this nifty 56 yard scramble for the score.

Kelso 45, Gig Harbor 34
Gig Harbor took a big early lead and were up by double over the Hilanders at the half 34-17. Kelso’s defense then buckled down shutting out the Tide in the 2nd half while their offense began to heat up. This 50 yard run iced the game for Kelso.

50 yard TD run breaks it open for the Hilanders

Spanaway Lake 7, Garfield 0
This was a rough game where  both defenses dominated with neither defense really giving up a point. Technically Garfield did but the lone score in the game was when the Bulldogs fumbled and the Sentinels Eugene Camacho scooped it at the Garfield 46 returned it to the 1 yard line and the Sentinels punched it in on a QB keeper by Dempsey James.

Garfield did drive down to the 1 yard line late in the game twice but both times false starts pushed them back to the 6 and the Sentinels defense held. The game was led in yardage by penalty yardage (not kidding) as flags were thrown at a high rate with several multiple flags thrown on a single play. This led to a very choppy game where neither team could find any rhythm. Although we did not have any official stats the Garfield defense may have held Spanaway Lake into negative total offense.

The Bulldogs came out with a nice drive on the opening drive of the game that burned nearly 8 minutes off the clock but had to settle for a 42 yard field goal attempt that missed. The Sentinels simply relied on their defense who never gave in from start to finish.

Peninsula 35, Arlington 29
Link to story on this game.

The Seahawks win it in OT