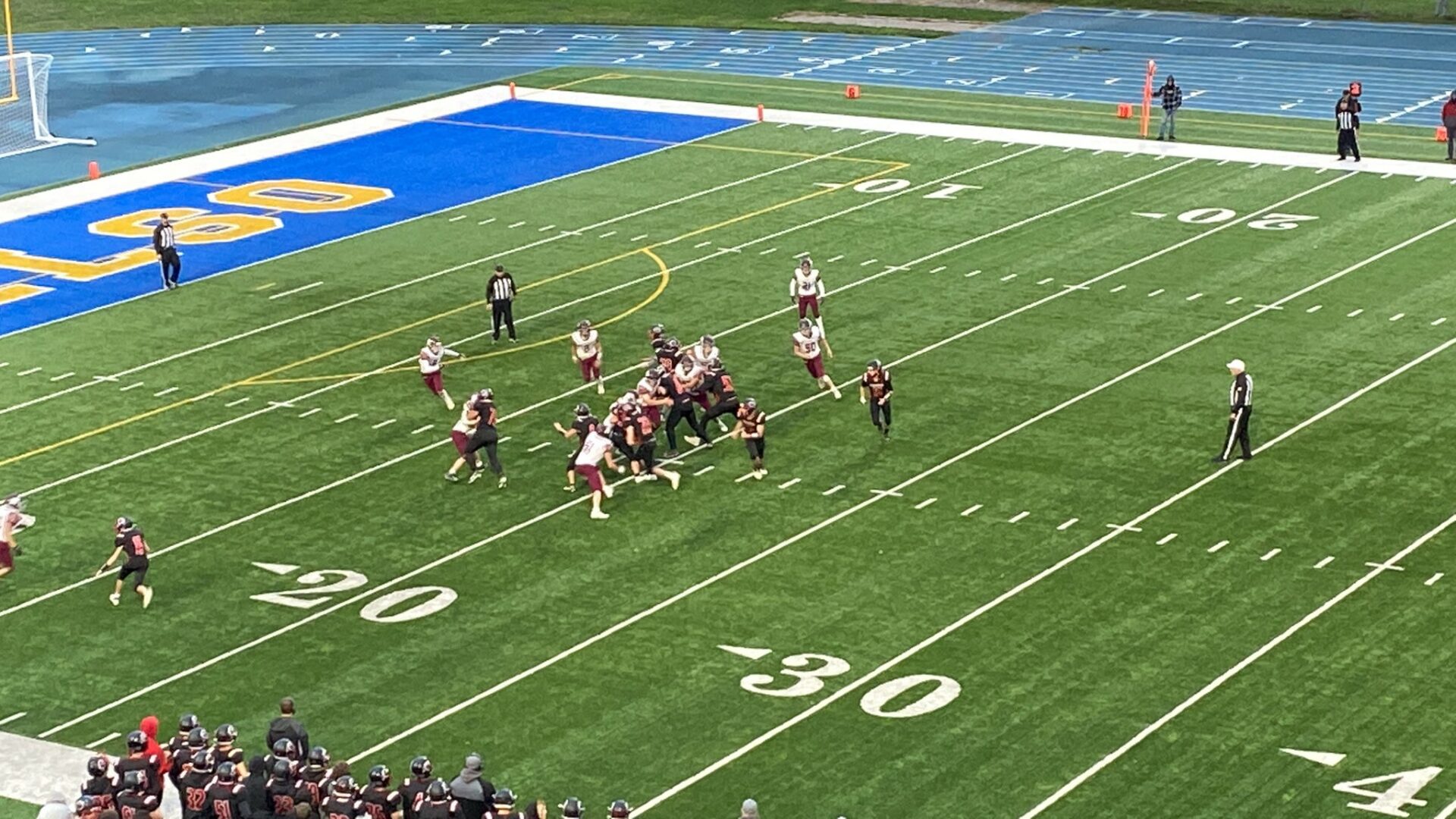 There were some significant upsets in the 1A bracket that shook up the State playoffs, with many of the games being competitive going into the 4th quarter. Here are the 1A recaps from ESN reporter Alex Benzegala.

The Cruisers cruised to the State Quarterfinals by pitching their first shutout of the season and amassing over 400 yards of total offense. Army commit Jon Kralik had an economical day at the office by completing 4 of 4 passes for 117 yards and a touchdown and adding 62 rushing yards.

(La Center, WA) Cashmere trailed 14-0 after 1 quarter against the higher seeded La Center Wildcats but the Bulldogs stormed back to take a 15-14 lead at halftime and ultimately won a nailbiter 22-16. The Bulldogs made big plays, such as a pick-six and a fumble recovery that proved to be vital in the upset win for Cashmere. Full story from Micah Rice from the Columbian below

La Center falls to Cashmere in 1st round of 1A state football, 22-17 – The Columbian

(Shoreline, WA) The Freeman Scotties went on the road to Kings High School and used a 14-0 lead in 1st quarter to put themselves in position to upset the Knights. The win for Freeman was their 6th in a row while the loss for Kings ended a 6-game winning streak. The 28 points that Kings allowed was a season high for their defense and was the most since the 35 points they allowed in a loss to Royal in last season’s semifinal game.

(Montesano) Toppenish fell behind 21-7 but mounted a spirited comeback by outscoring the Bulldogs 15-3 in the 2nd half, but it wasn’t enough as Montesano held on to move to the quarterfinals. Toppenish outgained Montesano by over 100 total yards, but turnovers hurt the Wildcats as their season ends with an 8-3 record. Click below for the story by the Yakima Herald-Republic

(Bellingham, WA) The Pioneers earned their first State Playoff win since 2010 and overcame a slow start to pull away from the Rams in the 2nd half. Nooksack Valley led 12-7 at halftime and it was a one possession game going into the 4th quarter before the Pioneers scored an avalanche of points in the 4th to end Riverside’s season.

(Tenino, WA) In football momentum can change not only throughout a game but can change during a season, and right now Mount Baker is one of the surprise teams in the post-season after upsetting Tenino. The Mountaineers started the season with a 3-4 record but have now rattled off 4 consecutive wins to earn a trip to state quarterfinals. Running back Marcques George is playing as well as any running back in 1A at the moment, as the Senior had another huge night in the win over Tenino. Check out the story by Alec Dietz of the Chronicle below.

Banged Up Beavers Fall to Mountaineers | The Daily Chronicle (chronline.com)

(Mead, WA) The Eagles improved to 10-0 after dominating a Bellevue Christian team that was riding a 4-game winning streak, but Lakeside came out fast by taking a 20-0 lead after the 1st quarter. The Eagles added 13 more points in the 2nd quarter to take a commanding 33-0 at halftime to put the game out of reach.

(Royal City, WA) The 9-1 Knights cruised to their 6th straight win in a blowout of the 1A Nisqually league champion Cascade Christian. Royal lead 27-0 at halftime but the game was not as lopsided as the score suggests, Cascade Christian had a TD brought back due to penalty and Royal also forced a fumble that led to a touchdown. Below is the story by Cheryl Schweizer of the Columbia Basin Herald.

2B 1st Round Results

There were not many upsets on the 2B side of things, but there were some significant results with one higher seed being upset. Here are the recaps of the games as well as links to full stories.

(Kelso, WA) The Kittitas-Thorp took an early 7-0 lead of a 79-yard touchdown pass, but Toledo responded with 28 straight points in the 1st quarter and kept the momentum going into halftime to take a 35-14 lead at break.  The Riverhawks strong running attack was a big asset as Toledo had 256 rushing yards in the win. Toledo has now won 8 straight games going into the State Quarterfinals and are 10-1 overall. The trip to the State Playoffs was the first for Kittitas-Thorp since 2016, as the Coyotes end the season with a record of 7-4. Check out more info about the game in Dacota Haynes story below for the Daily News.

2B High School Football: Toledo answers back in 48-21 win over Kittitas in State playofs (tdn.com)

(South Bend, WA) Raymond/South Bend made history by winning their first state playoff game as a combo school, shutting down a Goldendale offense that has scored at least 40 points in their last 4 games to propel them to the State Quarterfinals. It was a defensive struggle throughout as RSB took a 14-0 lead into the 4th quarter before Goldendale got within a score on a rushing touchdown. The Ravens closed the door though with a long, 14 play drive capped off by a short TD run from star running back Ty Reidinger and the 2-point conversion was good to make it 22-7 the final. Raymond/South Bend improved to 9-2, while Goldendale fell to 8-3 and had their 6 game winning streak snapped in season ending loss. Here is Ryan Spark’s story from the Daily World

(Oak Harbor, WA) In the only mild upset of the weekend in 2B, state power Onalaska got past 7th seeded Coupeville in a competitive game, as the Loggers had more consistent offense by scoring at least 6 points in each quarter. Onalaska held a 14-7 lead at halftime and converted on 3 2-point conversions in the victory. Coupeville rallied in the 3rd quarter with a touchdown to tie the game but lost their starting quarterback Logan Downs sin the quarter. Onalaska took advantage and scored the final 16 points in the game, including a pick six in the final minute to seal the win for the Loggers The loss for Coupeville ended one of the best seasons in school history, at 7-2, their best record since 1990. For more on the game, click the link below for a full story by Alec Dietz of The Chronicle.

Liberty’s defense has been among the best in 2B all season as the Lancers have allowed less than 15 points in 4 straight games, and that continued against a River View team that has scored 35 points in their last two games, holding the Panthers to a season low 14 points. Liberty improved to 7-2 behind two rushing touchdowns by Jake Jeske of 11 and 40 yards respectively, while Jeske also added a passing TD. The Lancers improved to 8-2 while the Panthers loss ended a 6-game winning streak to finish 9-2.