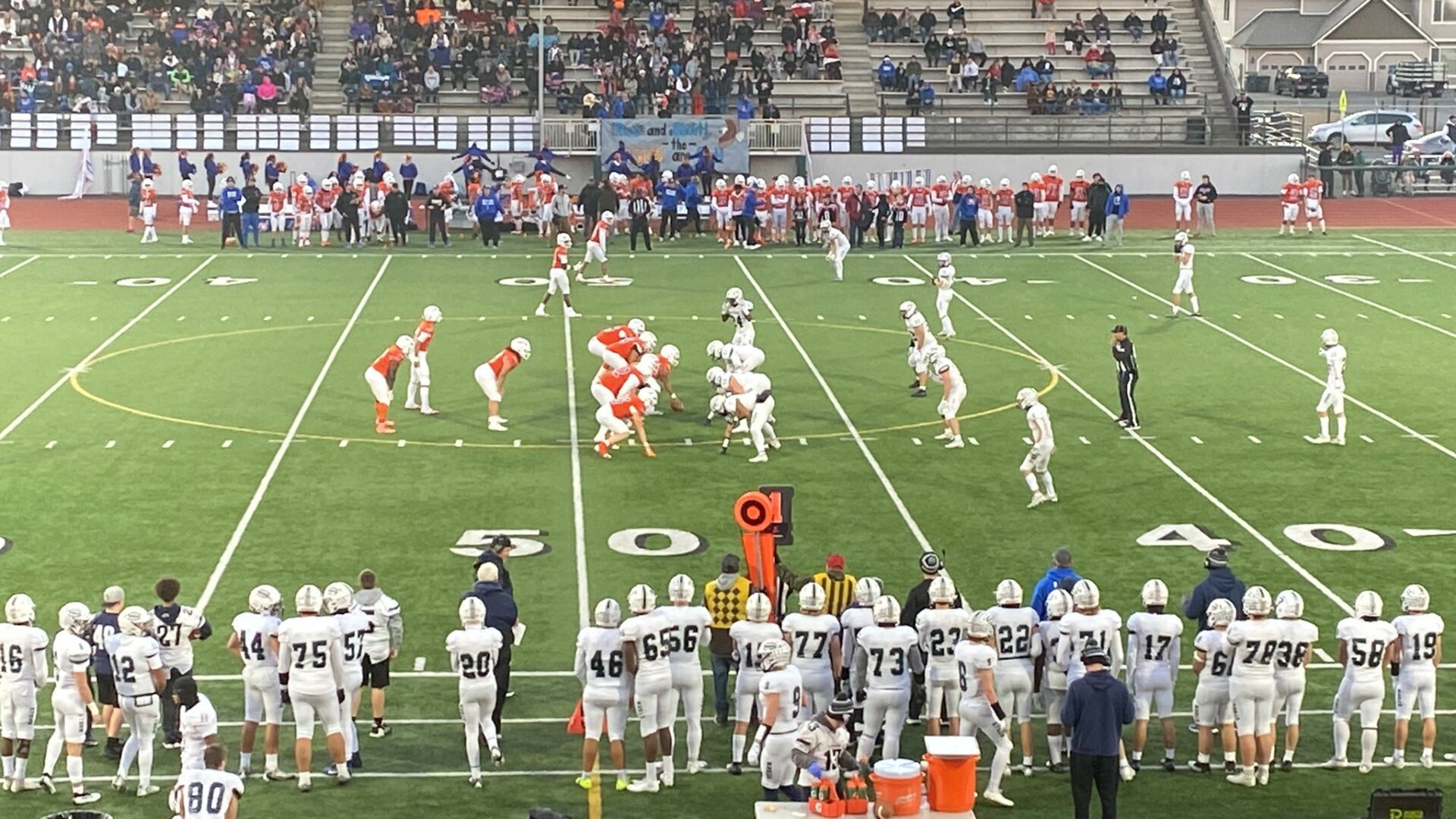 As expected, there were some blowouts in the 1st round of the 4A State Playoffs, but for the most part the matchups were closely contested with near upsets. Here is ESN’s recaps of all the action.

(Sumner, WA) The Woodinville Falcons were coming off a colossal upset of Glacier Peak in the Crossover playoffs last week and were aiming for another shocker at Sumner, but the Falcons offense turned it over 4 times in the red zone in a 31-0 shutout win on Friday night for the Spartans.

The game plan was simple for Sumner, as they ran the ball early and often with All-SPSL running back Matthew Spurbeck, and quarterback Kayde Bodine scampered for a 19-yard touchdown in the 1st quarter to give Sumner the early lead.

Woodinville’s defense was amongst the best in 4A as no team from Washington State had scored more than 27 points against the Falcons, but Spurbeck had another big game as the junior rushed for 152 yards and a 6-yard touchdown in the win. Sumner also got good play from the QB position as the Linfield University recruit Kayde Bodine threw for a TD to accompany his rushing score, and Diego Collie had a TD pass as well. Kade Jindra, Kano Borden and Kaden Malesis each had receiving scores. Jindra also had an interception on defense late in the 2nd quarter to set up a Spartans touchdown to give Sumner a 21-0 lead at halftime. The 4 interceptions on defense were by Jindra, Jay Mentink, Dylan Coffee and Brayden Adcox.

Sumner improves to 10-1 and moves on to face 4A SPSL foe Graham-Kapowsin in the 4A quarterfinals. Woodinville’s season ends at 5-6.

(Puyallup, WA) In their first appearance in the State Playoffs, the Emerald Ridge Jaguars overcame a shaky start and rallied from a 4th quarter deficit to knock off the Eastlake Wolves 21-9 at Sparks Stadium in Puyallup.

The Jaguars offense turned it over on their first two possessions, as Jake Schakel threw an Interception to fellow QB and safety Cole Hunt who returned it to the 30 of the Jaguars. Hunt then threw a 5-yard TD pass to Colby Marsh to make it 6-0 Wolves, the extra point failed on a botched snap.

Tayshaun Micks then fumbled on the ensuing offensive play for ER that the Wolves recovered, and it looked like Eastlake would take a 2-possession lead, but Emerald Ridge’s defense began to take over, as they forced a fumble of their own that Bam Afalava recovered. Schakel found his rhythm as the game progressed and he found receiver University of Idaho recruit Tony Harste for a short TD, extra point by Brady Peterson and Emerald Ridge lead 7-6 at halftime.

Emerald Ridge’s defense made big plays all night against an Eastlake team that averaged 33 points a game entering the State Playoffs, as Logan Lisherness recovered a fumble to end a scoring threat, but Eastlake did get on the board in the 3rd quarter on an Alex Dreher 37-yard field goal to give the Wolves a 9-7 lead entering the 4th quarter.

With the game on the line, it was the Jaguars who made the big plays down the stretch as Schakel hit Harste for his 2nd touchdown of the game early in the 4th, the 2-point conversion was good on a pass to Harste as well to give ER a 15-9 lead.

The lead would hold as Logan Lisherness came up with two huge plays, first an interception of Cole Hunt that set up his own TD run to put the game out of reach at 21-9.

Emerald Ridge improved to 9-2 and will travel to #1 Chiawana in Pasco for in their first State Quarterfinal game. Eastlake’s 4 game winning streak was snapped as their season ends at 8-3.

Jayden Limar is widely considered the top running back in the state and the senior Notre Dame commit ran wild against North Creek with 4 rushing touchdowns and 189 yards to send Lake Stevens to the 4A state quarterfinals.

For more on this game, check out the story from Cameron Van Till of the Everrett Herald: Lake Stevens beats North Creek, advances to 4A state quarterfinals | HeraldNet.com

(Sammamish, WA) In a game with a lot of big plays, it was the Skyline Spartans who withstood a late comeback attempt from Federal Way to advance to the State quarterfinals to face another NPSL opponent in Kennedy Catholic. Skyline once lead Federal Way 26-7 in 2nd half before the Eagles mounted a late run, but the Spartans had a huge night from QB Michael Grimmer who had five touchdowns for Skyline.

(Kennewick, WA) Gonzaga Prep used an effective running attack as the Bullpups ran for just under 300 yards against a Kamiakin team that had not allowed over 29 points in any game this season.

Lilomaiava Mikaele has been a workhorse at running back all year for Gonzaga Prep, and he had another vintage performance with 190 rushing yards and 3 touchdowns on a whopping 30 carries.

Kamiakin took an early 12-0 lead before GP rallied to take a 13-12 halftime lead.  Kamiakin quarterback Carter Poland completed 27 of 48 passes for 374 yards but a pick six in the 2nd half turned the tide in favor of the Bullpups. The loss for the Braves also ended a 6-game winning streak and dropped their record to 8-3. Gonzaga Prep improves to 9-2 and will now face # 2 Lake Stevens in a rematch of a 4A quarterfinal game last season.

For more on this game, check out Scorebook Live’s story by Jeff Morrow. Gonzaga Prep’s ground game means business – and the Bullpups churn out victory over Kamiakin – Scorebook Live

(Burien, WA) Kennedy had dominated every opponent since their opening week loss to 3A #2 Eastside Catholic, but that changed as Richland gave the Lancers all they could handle in the Lancers first State Playoff game since 2019. The problem for the Bombers was that Kennedy raced to a 32-7 lead at halftime, before the Bombers exploded with 28 2nd half points to get back in the game.  The 35 points scored by Richland was the most by any team against Kennedy this season, but the explosive offense of Lancers scored over 40 points for the 10th straight game. Kennedy Catholic improved to 10-1 on the season.

(Spanaway Lake, WA) An explosion of 21 points in the 2nd quarter for the 4A defending state champions helped the Eagles earn another state quarterfinal appearance. Three different Eagles scored in the quarter ad Daveon Superales threw touchdowns to both Jabez Woods and Spencer Bonter while Demetrius Taape scored one on the ground that he set up with a great kick return.

Gavin Packer had an incredible game at receiver for Skyview as he had 15 receptions for 275 yards and two touchdowns as the Storm relied heavily on Packer after starting running back Trey Jacob left the game with an injury.

The big game from Packer wasn’t enough as Vinicio Hansen had an interception for a TD late in the game to give G-K a three-score lead. Skyview would score and recover an onside kick to give the Storm the ball only down by 14. The defensive line of Graham-Kapowsin recorded back-to-back sacks to force a turnover on downs to seal the win for the Eagles.

The win kept the Eagles red hot as they are having success in every single facet of the game. Graham-Kapowsin has now won six straight games and will face the team to last beat them in the Sumner Spartans in the State Quarterfinals.

The 1B 1st round was a little bit more predictable as only one of the games had a winning margin of under 10 points and all of the higher seeds were victorious. Here are recaps from the games.

(Walla Walla, WA) DeSales lead 28-14 at halftime before 26 unanswered points in the 3rd quarter to pull away from Quilcene. The Irish will face Liberty Christian, the only team to beat DeSales this year in the Quarterfinals. For more read the full recap from Roy Elia of the Walla Walla Union Bulletin below:

(Wellpinit, WA) Wellpinit raced to a 26-0 lead at halftime before Pomeroy responded to cut the lead, but the Pirates ultimately could not overcome the large deficit in the season ending loss. Here is the full recap from the Union Bulletin below.

(Wenatchee, WA) The Mountain Lions limited a Kings offense that averaged 48 points a game to just 46 yards of total offense. It was also the first time Muckleshoot Tribal was shutout in a game in 3 seasons, as their previous scoring low this season was 28 points.  In Liberty Bell’s last 3 wins, their average margin of victory is 69 points.

(South Bend, WA) Naselle put up a whopping 52 1st half points against the defending state champions in a statement victory to set up a showdown with #1 Odessa next week. Full recap by Jordan Nailon of the The Daily News below: