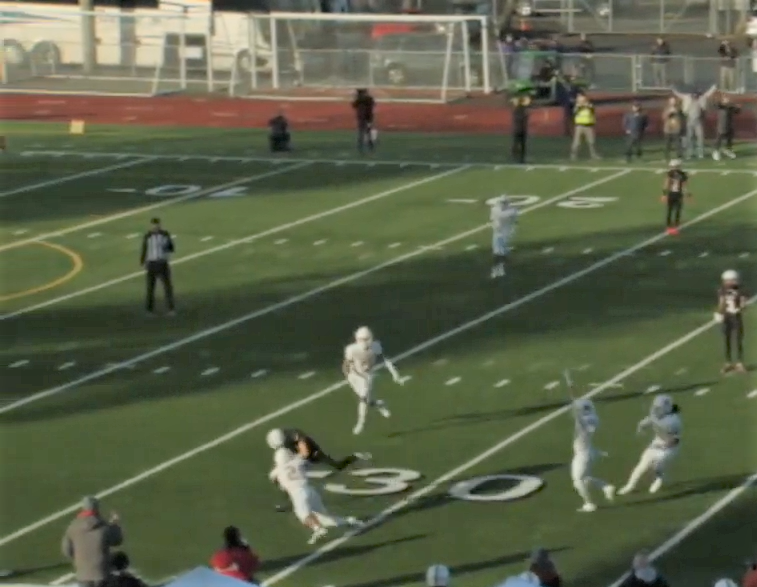 By now most football fans have seen the incredible play Kyler Ronquillo made to give Yelm their first State Football Championship in school’s history. If you haven’t seen it, here it is…

That aside there are some calling this the play of the year, play of the decade, play of the century and even the best play ever. The presence of mind Ronquillo had to have to understand there was less than a minute to play and simply tackling Weaver was not going to help Yelm win this game. Ronquillo had to make a conscious decision to go after the football. After talking with his Dad, Jason Ronquillo who is also the head coach for Yelm said the automatic response would be to make the tackle to make sure the defender doesn’t get a return. That’s the “normal” response.

For Kyler to decide in that split second to make a play that will be talked about for years to come is why this play is so special especially when you consider what was on the line. It wasn’t a regular season game it was for the State Championship.

You ask what would be a bigger play? How about a critical 4th and 1 just to get to a place for such a spectacular play to even happen. That’s right, the play before Ronquillo may in fact be the play of the game. The Tornados were facing a 4th and 1 on their own 44. Time is ticking down to just 1:30 left to go in the game so a stop by Eastside Catholic gives the Crusaders about a 98% chance to win the game if not more.

Yelm QB Damien Aalona hands the ball off to their big running back Brayden Platt and as Platt headed to the left side of the offensive line he was hit in the backfield at the 43, 2 yards short of the 1st down, there is another defender down around his ankles and a 3rd comes to help get Platt down but the force Platt initiated and then simply stayed up and drove his legs forward simply willing himself to the 1st down was remarkable. Take a look at this incredibly important run by Platt carrying him and several defenders to the 1st down marker…

Brayden Platt powers to a 1st down

The argument for this being the play of the game is simple, without it, then the spectacular play of Kyler Ronquillo doesn’t even have a chance to happen. If Platt doesn’t get the 1st down then Eastside Catholic takes over with 1:00 to play on the Yelm 44. The Tornados had 3 time outs so even if they stop the Crusaders on the first 3 downs the time would be down to probably 45-seconds on 4th down and if E-C punted they would likely drop it inside the 20 but even if it went into the end zone it would have given Yelm maybe 40 seconds on their own 20 with no time-outs.

Ronquillo’s play, yes play of the year, play of the century whatever accolade you want to give it is deserved but play of the game? Nope, a 1 yard dive play where the RB took on 3 and should have been sacked for a 2 yard loss is what triggered the incredible outcome we will all remember.

The only ones who will remember this play will be Platt and his senior teammates when they get together at their 10 and 20 and 30 year class re-unions and no doubt the memories will be skewed and the actual play may be a bit embellished.

In fact, by the time Platt, Ronquillo and his teammates get to their 50th re-union the story may be that Platt would have run 21 yards for the 1st down and literally carried the entire Crusader defense on his back. As big as the eventual outcome was it probably already feels like that.