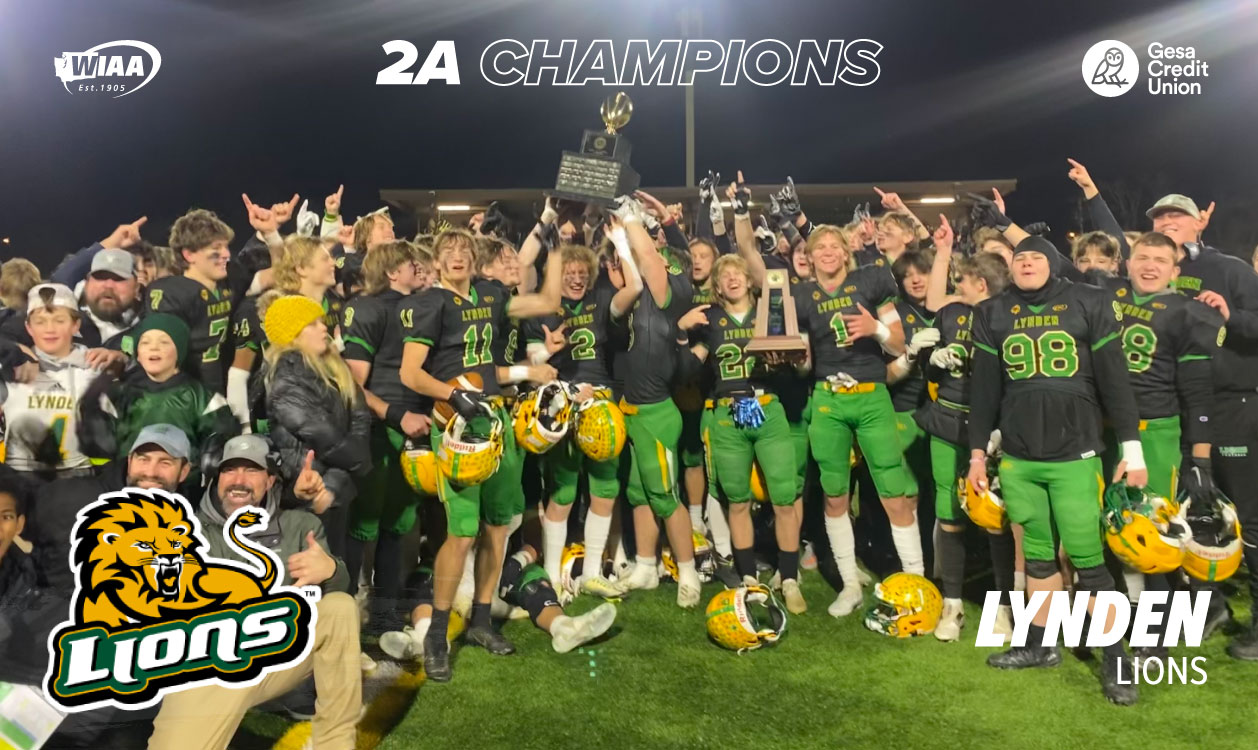 (Puyallup, WA) The North Kitsap Vikings were making their 1st appearance in a State Championship football after coming off a 1 loss season and marching through the state play-offs highlighted buy their come from behind win in the semi-finals against WF West. The Vikings then found themselves right back to where they finished last season facing the Lynden Lions. The Lions eliminated North Kitsap last year in the semi-finals 15-10 before beating Tumwater for their 9th State Championship.

Lynden comes in as one of the most if not the most experienced team since the state play-offs began in 1974 as they surpassed this season playing in 90 state play-off games or the equivalent of nearly 10 extra years of a regular season schedule. 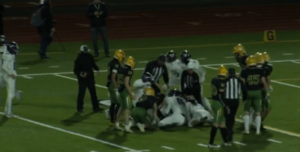 But emotion, ambition and momentum can be funny things and the North Kitsap Vikings were ready to take their best shot at one of the most decorated programs in state history and they did it on the opening kick-off.

The Vikings won the toss and elected to defer so Diego DeLuna booted it deep to the Lions Kaedan Hermanutz who bobbled the slick ball on the frozen turf and it popped up in the air while the Vikings descended and North Kitsap’s Alex Elton appeared to come away with the loose ball on the Lynden 11 yard line.

Twice last week against Enumclaw the Lions held the Hornets out of the endzone from their own 2 yard line and they found themselves back in familiar territory. Lynden’s defense flexed and held the Vikings  to a 4th and long and they had to settle for a DeLuna field goal but did take an early 3-0 lead. They had a chance to add to that lead when Logan Sloman intercepted a pass and gave North Kitsap their 2nd possession beginning in Lynden territory at the 31. 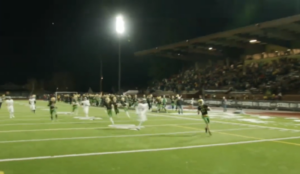 Once again the Lions held forcing a 47-yard field goal attempt from DeLuna but Collin Anker came flying in and blocked the kick attempt and as the ball went spinning into the air it fell to the right side of the offense where Lynden’s Troy Petz scooped it and was gone for 6 untouched and with 6:44 to play the Lions led 7-3.

Lynden would add their own field goal after a 12-play drive that stalled at the 18, Petz knocked it through the uprights for a 10-3 lead. Lynden then took all the air out of the sails of the Vikings holding them to a pair of punts and then burning the final 5:13 with a 14 play drive that went 89 yards and ended with the 1st QB keeper touchdown from Brant Heppner from the 1 yard line and they would go to the half leading 17-3.

As the 2nd half began it was important for North Kitsap to show they weren’t done and ready to simply accept the runner-up trophy and they wanted to make a statement in which they did with an 80 yard drive including picking up a huge 4th down conversion. As they approached the red zone Vikings QB Cole Edwards had a great scramble down to the 4 where running back Benan Lawler plowed in for his 1st touchdown. With with 9:01 to go N-K was back to a one score game, down 17-10.

Lynden though would answer in mere seconds when Troy Petz caught the kick-off from DeLuna with 1 foot in the endzone but the ball in the field of play. Petz zipped to the far sideline and dashed up the field in front of the Viking bench passing everyone and got inside the 10 yard line cut back to the middle and scooted into the endzone for a 99-yard touchdown return….except one of those yellow flags came out as a team mate at the last second at about the 6 yard line pushed a Viking in the back and the score was off the board but the Lions were in great position on the 17 of N-K. 4 plays later Heppner had his 2nd 1-yard TD run and they got the 7 points right back to go up 24-10.

The Vikings refused to give in and came roaring back with an impressive 16 play, 81-yard drive that was perfectly balanced with 8 runs and 8 passes. The Vikings methodical drive also picked up 5 1st downs and was finished with the familiar Benan Lawler powering his way into the endzone from the 2 yard line and it was again a 7 point game. 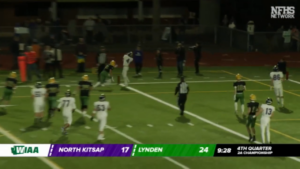 After a quick 3 and out the Vikings got the ball again on their own 34 yard line with just 8 seconds to play in the 3rd quarter. The Vikings went back to work and drove down to the 25 yard line when Edwards found Logan Sloman for a 20 yard catch and run to the 5 yard line. On the very next play Edwards rolled to his left and floated a soft looping pass to Lawler for the score, DeLuna added the PAT and with 9:20 to play in the game it was all square at 24-24.

Lynden certainly wasn’t going to panic and instead fell back on their strengths which was to control the line of scrimmage grind off those 3-4-5 yard plays and go back to work. The Lions would put together an epic 17 play drive that would drain the clock of nearly 8 and half minutes and Heppner would add his 3rd touchdown of the game from the 1 yard line.

The key play in the drive was with 1:18 to play and 3rd and long from the N-K 17 yard line the Lions would split out only Isaiah Stanley to the left. Lynden Coach Blake VanDalan confirmed after the game with ESN that he had instructed Heppner to either lob it up for Stanley or throw it away and they would take a shot with Petz kicking a 34-yard field goal. 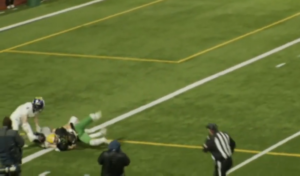 Heppner did as he was told but did lob a perfect pass up to Stanley who outjumped the double team draped all over him and he pulled down an incredible catch at the 1-yard line. After a Viking time-out Coach Jeff Weible decided their best chance was to let Lynden score so they could try and respond with about a minute left to play. The Vikings indeed let Heppner cross the goal line.

After receiving the kick way back on their own 11 they fumbled the ball and Lynden would recover to clinch their 10th State Championship in a crushing loss to North Kitsap.

Our MVP’s for Lynden were Stanley as the offensive MVP and Petz for the defense. North Kitsap’s Lawler was our offensive MVP for the Vikings while Sofian Hammou was the defensive MVP. We need to add that Hammou was an absolute beast and unofficially had him from his defensive line position with 8 tackles and 3 assists. Our play of the game was Collin Anker’s field goal block and then Petz returning it for the score.

Lynden blocks a field goal and returns it to the house