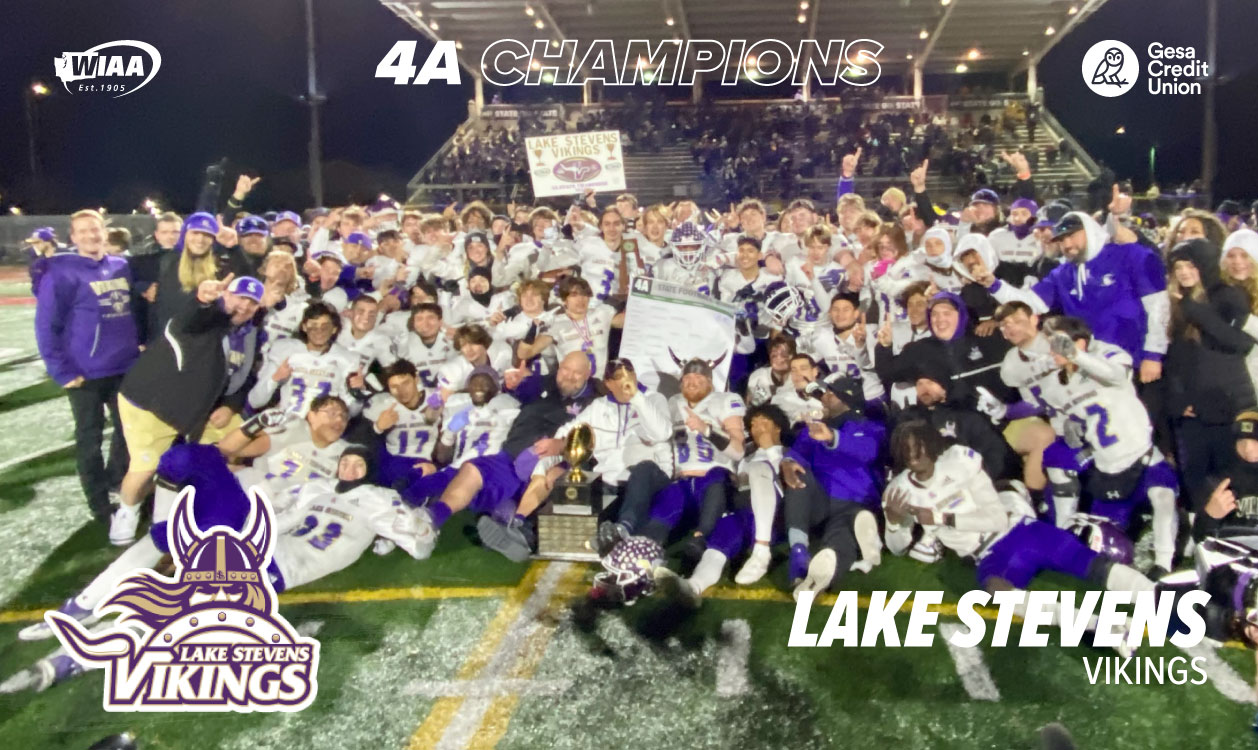 (Tacoma, WA) In the 4A state championship game it was a battle between two teams who had never won a football state title. However, both the Lake Stevens Vikings and Kennedy Catholic Lancers were familiar with deep state runs and even state title game appearances. This time one of these two squads would get over the hump and it would be the Lake Stevens Vikings avenging their championship game loss from a year ago.

Both teams have been right in the thick of things in the 4A classification over the last 5 years. The COVID pandemic took a year away from Kennedy Catholic who were going to be the team to beat in 2020 no matter who you asked around the state. The Lancers also made their first trip to the 4A state tournament in 2019 when they fell in the quarterfinals that year. Lake Stevens had made the quarterfinals every year since 2018 and had gotten to the championship game twice in 2018 and last season in 2021 but fell short in both of those showdowns.

The #2 seeded Lake Stevens Vikings came into the game with a record of 11-2. Lake Stevens had been very consistent in the state playoffs scoring 42 points in each of their first three games. They would fend off the #15 seed in North Creek 42-27 to begin the tournament before defeating #7 Gonzaga Prep 42-17 in the quarterfinals. The Vikings then avenged their championship to Graham-Kapowsin last season by knocking off the Eagles in the semifinals 42-28.

#4 Kennedy Catholic came into the game at 12-1 and the Lancers continued to use their high-octane offense in route to a championship berth. Kennedy Catholic knocked off #13 Richland in a shootout in the first round of state 46-35 but the defense took control of their quarterfinal matchup with #5 Skyline as the Lancers got a 38-10 win. They would then knock off #8 Emerald Ridge 42-28 in the semifinals to set the stage for their first 4A championship game appearance.

On the opening drive of the game, Kennedy Catholic fell victim to something we would see many times in this game and that was a tipped pass at the line of scrimmage. A Lancer pass was tipped at the line of scrimmage and lineman Ashten Hendrickson would come away with the interception to give Lake Stevens great starting field position. Notre Dame commit Jayden Limar would take over from their as the running back helped turn the takeaway into points as he scored a five-yard touchdown to give Lake Stevens the early 7-0 lead.

Field position was a big talking point in the entire game as Lake Stevens punt returner Paul Varela had an electric night in the return game and constantly gave his offense great starting field position. The Kennedy Catholic defense would do their job led by Arizona State commit Xe’Ree Alexander alongside Ish Taliauli and Micah Banuelos got consistent pressure in the backfield to keep Lake Stevens from adding on for the remainder of the opening quarter.

It felt as if Lake Stevens would take control after a disaster of a play by the Viking offense turned into a highlight reel run for Limar. Quarterback Kolton Matson was hit as he threw and the ball went backwards and out of bounds. After the officials had a conversation and got the call right, a 3rd and 21 would be nothing as Limar fought through multiple tackles and picked up 22 yards and a first down. Everything changed a couple of plays later. Matson was hit by Mason Hayes to knock the ball loose and Xe’Ree Alexander would scoop it and take it 66 yards for a defensive touchdown to all of a sudden tie the game at 7-7 in the biggest momentum shift of the game.

The Vikings would be able to answer on their next drive which ate up a ton of the remaining clock in the first half. Jayden Limar continued to do his thing but Kolton Matson started feeling it in the passing attack. The turnover seemed to only fired up the sophomore quarterback as Matson threw a perfect ball just over the fingertips of a Lancer defender and into the hands of Isaac Redford for a 16-yard touchdown to put Lake Stevens back on top 14-7 with only 1:25 left in the 2nd quarter.

Not only was the clock not in favor of Kennedy Catholic but starting quarterback Devon Forehand had to leave the game with an injury. Senior Payton Faker saw plenty of action throughout the season and the moment was not too big. Faker only needed three plays to drive the Lancers 65 yards down the field as he found Maclane Watkins for a 31-yard touchdown. The two-point conversion was also good which gave Kennedy Catholic a 15-14 lead at halftime to again stun everyone in attendance.

Neither team could get anything going to start the 3rd quarter. There were a lot of batted passes at the line of scrimmage for both sides. Kennedy Catholic also blocked a Lake Stevens field goal to preserve the lead. Even when Kennedy Catholic went to the Wing-T they couldn’t breakdown the Lake Stevens defense. Another great return by Varela gave Lake Stevens great starting field position late in the 3rd. Lake Stevens would capitalize as a 4th down pass from Matson to Cole Becker would be enough for the first down but that wasn’t good enough for Becker. A fantastic run after catch saw Becker reach the endzone with a 23-yard touchdown to give the Vikings the lead back at 21-15.

Payton Faker and the Lancers continued rolling with Watkins, Isaac Syph, and Nate Barnes doing a great job on offense as Kennedy Catholic moved right back down the field. They would retake the lead with a one-yard touchdown run by Alexander to move back in front 22-21 in the 4th quarter.

The Kennedy Catholic defense got the ball back but a turnover on downs gave Lake Stevens back the ball. The Jayden Limar took over once again with a 25-yard run to get the Vikings to the Lancer 25. On 3rd down, Isaac Redford made a tough catch at the 5-yard line but it would be short of a first down. On 4th and short, Macray Flanders would hit a 22-yard field goal from the right hash to give Lake Stevens the lead at 24-22 with 5:13 remaining.

With their first state title, Lake Stevens finishes the season at 12-2 and Kennedy Catholic also finishes 12-2.

Our MVP selections in this game were Jayden Limar for Lake Stevens and Xe’Ree Alexander was the Kennedy Catholic MVP. Both seniors showcased why they are both headed to Division 1 schools. Both left everything they had on the field and are two to keep your eyes on in college.

3rd and 21 Conversion by Jayden Limar

4th Down Touchdown for Vikings