Football: Kalama gets their revenge on Napavine with dramatic OT win 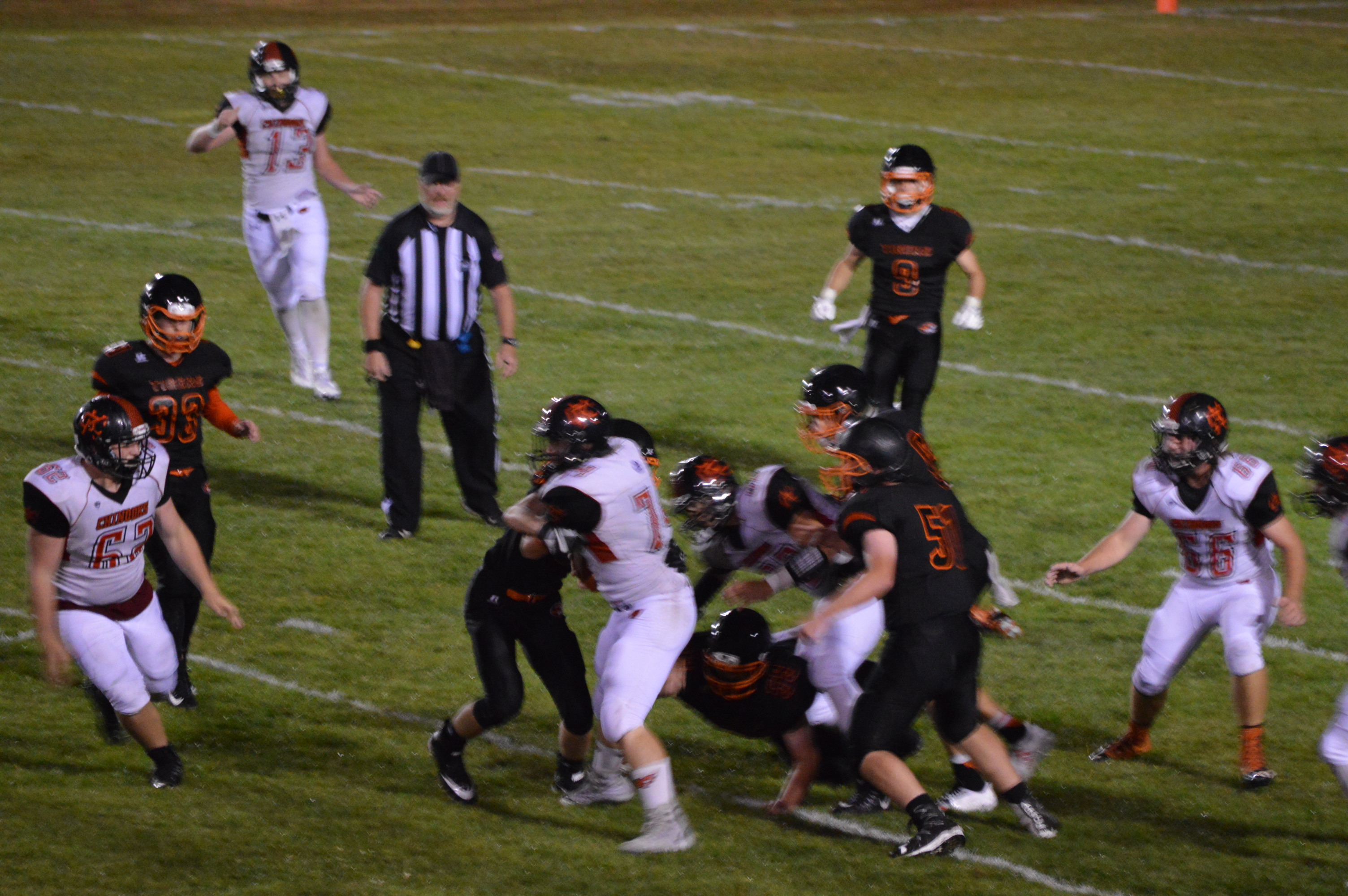 (Napavine, WA) Rankings in High School football really mean nothing since teams earn their way into post-season and there are play-offs all the way to a championship game. But fans, followers and players love to follow the rankings while most coaches we know despise them.

Regardless of how you feel though the rankings do create excitement and anticipation especially when a 1 vs a 2 which happened Saturday night the 2B’s with Kalama at Napavine. The large crowd that showed up on our first rainy night in literally months showed you even though this was a non-league game it had the potential to be a great showdown and in the end these 2 teams did not disappoint.

The Chinooks returned a large contingent for 3rd year coach Sean McDonald from last year’s team that were eliminated from post season by these Napavine Tigers who then of course finished off their undefeated season with a State Championship. The Tigers graduated many key players but Coach Josh Fay has many athletes to fill those spots and the cupboard is far from empty.

As the game got underway it was a defensive throwdown with both teams able to move the ball from 30 to 30. There were several impressive plays but no one was able to break through on the other’s defense until late in the 1st half when the Chinooks struck first.

Kalama took over on their own 27 with just 1:57 left to play. QB Alex Dyer hit a pair of big completions a 25-yard strike to Tucker Wetmore and a 21-yard toss to Jacob Herz. Kalama worked their way down to the Napavine 20 when Dyer dropped back and found Herz once again this time in the endzone and covered the 73 yards in just 47-seconds leaving 1:10 on the board. As the Nooks lined up for the PAT the snap was low and Dyer scrambled to his right and then threw back to the middle where Corbyn Byrnes grabbed the tipped ball for the 2 point conversion and Kalama would go to halftime with an 8-0 lead.

Early in the 2nd half it appeared the Chinooks may have hit a huge play to put the Tigers in deep trouble when Dyer hit Wetmore on a 60-yard TD pass. Wetmore split defenders as Dyer dropped the ball in perfectly avoiding both defenders who were closing fast but the play was called back with a very tight to say the least ineligible man downfield penalty. This would not be the only time this particular penalty would derail Kalama at a critical time later in the 2nd half it would nullify a big first down play. The odd thing about the call was the flag was thrown literally at the line of scrimmage which really questioned just how far downfield the alleged ineligible player really was but none the less the call was made.

Napavine took full advantage of both of those situations and forced Kalama to punt away. This is what a Championship team does is understand you are not in charge of making calls but when you have an opportunity take full advantage of it and they did. This also set up quite a crazy finish.

Despite not being able to add to their lead it looked like the Chinooks were about to finish off the Tigers and shut them out for the first time since 2011. The problem though with leading only 8-0 is it’s a one possession game and with less than 4 minutes to play Dyer stepped back trying to pick up a big 1st down so they could run the clock threw it over the middle when Jordan Purvis picked it off. Purvis returned it to his own 49 with 3:04 to play in the game and the Tigers were in business.

Dawson Stanley who with Randy Kinswa at QB struggled in the passing game connecting for 74 yards but 4 interceptions. Stanley used his legs to begin this drive and then with just 1:33 left to go in the game Stanley dropped back and tossed a perfect 28-yard pass to the taller Purvis over the defender and Purvis went up and snatched it for the touchdown.

There was still work left to be done and Napavine had to convert the 2-point play. Dawson took the snap and was flushed out of the pocket to his right and then decided to run for it but as the defense converged he saw Cole VanWyke in the endzone and flipped the ball to him just as he was being tackled and VanWyke caught to tie the game.

This sent the contest to OT and Kalama lost the coin flip and had to go first in the Kansas tie-breaker. The Nooks worked it down to the 4 yard line when Dyer then took it in himself to give Kalama a 6-point lead. Dyer then made a mistake of jubilation by tossing the ball in the air and got penalized 15-yards which pushed the PAT back to the 17 yard line which they were unable to convert so the Tigers could win it with a TD and a PAT but those thoughts were short lived when Hunter Griggs stepped up and intercepted a Stanley pass to end the game.

This was a battle of two of the top teams in the 2B class are they #1 and #2 as ranked going into this contest? That question will be answered over the weeks ahead but you couldn’t have asked for a better early season showdown than this one played at Tiger Stadium on a High School Football Saturday night.

Both teams put up similar offensive numbers Napavine had 255 total yards to 254 for Kalama. They did it in opposite ways as the Tigers ground out 181 yards on the ground and the Nooks went airborne for 238. Noah Lantz led all rushers with 66 and Stanley right behind with 65. Dyer had all 238 passing yards for Kalama and Wetmore led the catches with 5 for 79. Herz had 2 catches for 41 and a TD while others that chipped in were Max Ross and Grant Vandenberg.

An oddity to the observers was that 2 of the 4 interceptions made by Kalama were made by guys wearing very untraditional numbers for an achievement such as this #74 and #66. 74-KC Laranaga grabbed a tipped pass by Sutton Moon and 66 was Hunter Griggs who grabbed the game sealing pick in OT.