Football: Shoot-out in Chehalis ends off the foot of Bearcat Kicker 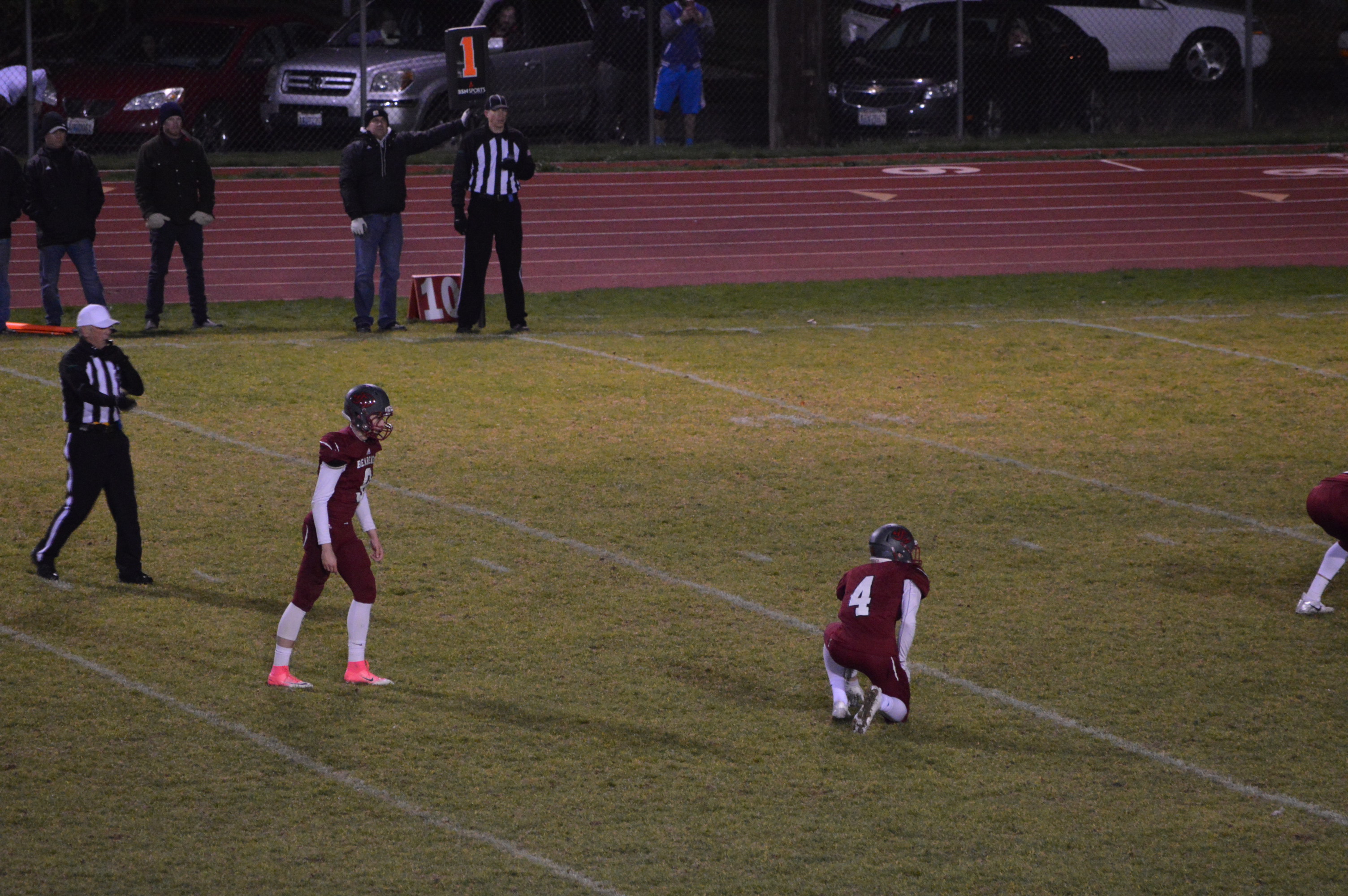 (Chehalis, WA) The only way to explain what happened at Bearcat Stadium Friday night between the WF West Bearcats and the Woodland Beavers and it’s this:

The cliche of it’s too bad someone has to lose was created because of games like this it had everything, nearly 1,000 combined yards between both offenses, big defenses plays including 8 turnovers, 4 for each team and a nail biting ending with no time left on the clock.

The game began with the Woodland Beavers running a reverse on the kick-off return with Tyler Flanagan zipping up the near sideline for a 50-yard return to the Bearcat 40. But 3 plays later Woodland’s QB Wyatt Harsh dropped back to pass and had it batted up in the air allowing linebacker Camden Bull to pick it off and give the ball to the Cats offense on their own 42.

The Bearcats came out with the idea of running the ball and run it they did led by QB Nole Wollan who finished the game with 283 rushing yards on 37 carries. But he would finish off their 1st drive throwing a dart to big Leandre Gaines from the 13. The snap on the PAT was high and it failed but Chehalis led 6-0. The Bearcats would get another interception this time by Tyson Guerrero after the Beaver receiver cut to the post in the endzone and Harsh threw to the corner for the easy pick.

WF West then drove 80 capped off with a Ka’lmi Henry 55-yard dash off right tackle and cut back to the left and was gone. Cory Davis, alias Legatron, booted home the PAT and the Bearcats were up 13-0 with 2:28 to play in the 1st quarter.

It was now the Beavers offense’s turn to cut loose and they did so scoring 21 unanswered points and headed to halftime up 21-13. The TD was fueled by a big 35-yard strike to Wyatt Wooden to the 20 and then Harsh sprinted in for the TD on the next play. Alex Wakefield added the PAT and it was 13-7.

The Bearcats were on their way to answer when the 1st of 4 of their own turnovers occured with Wollan fumbling. The Beavers put together an 8-play, 78-yard scoring drive finished off with a 12-yard TD pass from Harsh to Wooden. Wooden finished the game with 9 receptions for 144 yards and the TD. The Beavers then took their first lead 14-13 on Wakefield’s PAT.

Woodland added to their lead after holding the Bearcats to a 3 and out and began on their own 46. Beaver Head Coach Mark Woodward reached into his bag of tricks and called on the halfback pass that Tyler Flanagan threw to Alex Bishop for a 38-yard strike and pushed their lead to 21-13.

The Bearcats re-grouped and began the 2nd half with a new offensive formation trying to rekindle the 1st half running game that the Beavers were able to slow down in the 2nd quarter. The shift allowed Nole Wollan to run wild including a 57-yard option run for a touchdown just 58-seconds into the 3rd. Wollan then threw a bullet to Jordan Thomas converting the 2 point PAT and the game was tied at 21.

Woodland answered with a solid 63-yard drive keyed by a 33-yard screen pass from Harsh to Flanagan setting up another TD pass from Harsh to Bishop in the corner of the endzone where Bishop toe-tapped a foot in for a dramatic score. Woodland re-took the lead 28-21.

On the 3rd possession of the 3rd quarter the Bearcats would not be denied and would drive the ball down to the 2 where once again Wollan plowed in for the score and it was all even at 28-28.

A second fumble by Wollan on a tight call on whether he was down or not before the ball came out went the Beavers way and took over on the Chehalis 12. Harsh would find Christian Yager for a 6-yard TD pass and the Beaver took a 35-28 lead with 11:10 to play in the game.

It looked like the game might then get away from the Cats when Ka’lmi Henry fumbled the ball and Woodland recovered it on their own 12. But Harsh would throw one of his 4 interceptions 3 plays later and WF West took over on the Beaver 43 and the Bearcats went back to where they started and Wollan threw another dart to Gaines from 15-yards out, Davis hit the extra point and it was tied at 35 with 3:05 to play.

On the next drive Woodland looked like they might roll down the field and punch in the go ahead score with little or no time to play. But the Bearcat defense who just gave up a 43-yard scramble play from Harsh to Wooden to get to the Bearcat 45 then came through with the stand of the game holding the Beavers forcing a 4th and 5 and they elected to punt with 1:07 to play in the game. This was named our ProActive Physical Therapy Play of the Game.

This set up an astonishing finish that saw the Bearcats move from their own 38 to the 20 yard line with 5-seconds to play. WF West Coach Bob Wollan then sent his kicker “Legatron” into the game to attempt a 37-yard game-winning field goal. The Beavers put on a strong rush but Cory Davis got the kick off, however he had to hurry the kick and it was a line-drive that crossed under the crossbar and was no good and we got set for OT, except that little yellow flag was on the ground and roughing the kicker was called against Woodland giving Davis a 2nd chance this time from 27-yards out and he booted high, deep and straight and with no time on the clock for the extra play ended the Beavers season in heartbreaking fashion while the Bearcats euphoria swept over the home team sideline and in the stands.

Chahelis will now either likely face Selah or North Kitsap depending on who wins tomorrow in one of the other crossover games between Black Hills and Columbia River.

Our Pacific Sports Spa Players of the Game went to both QB’s the Bearcats Nole Wollan and the Beavers Wyatt Harsh.