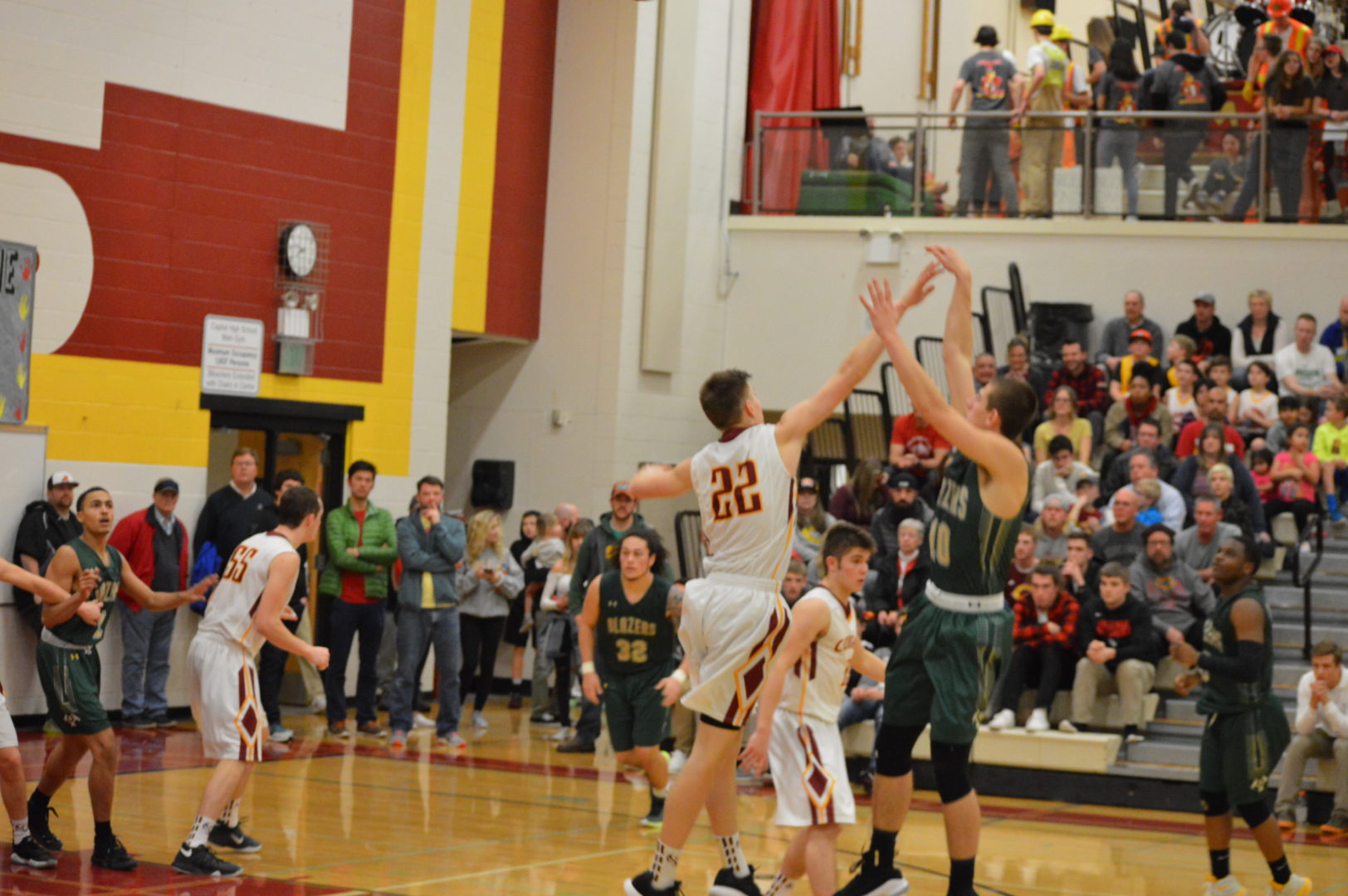 The problem for Capital was their offense was worse and Timberline’s under-appreciated defense was even better holding the Cougs to just 16 and just 5 in the 2nd quarter.

Clearly both offenses woke up in the 2nd half when considering combined they scored 42 points in the 1st half and more than doubling it in the 2nd half with 87.  Timberline’s all-time leading scorer and still adding to his more than 1,500 career points Erik Stevenson led all scorers with 22 after hitting 2 shots and 4 freebies in the 1st.

Eli Morton exploded for the Blazers with 12 of his 19 and 3 long balls while Casson Rouse finished with 13 and got things rolling in the 3rd hitting 4 of the first 6 points in the quarter and then finishing it off with the final 5 including a buzzer beating 3-ball.. Hunter Campeau off the bench was also deadly behind the arc matching Morton’s 3 and finishing with 11.

Capital certainly improved from their measly 16 first half points and were led by big man Grant Erickson in the paint and from the free throw line with 17 (7-9 from the line). The Cougs actually made a run at the Blazers getting within 7 and with possession before the run ended and the Blazers extended their lead.

Dawson Landers hit a pair of big 3’s during that run and finished with 13. Brett Stock was also solid for Capital with 10 but it was his tremendous defense especially in the 1st half that limited the offensive machine Stevenson is in the 1st half to just 8 points. It was this effort that earned Stock our Pacific Sports Spa Player of the Game for Capital.

Timberline Coach Allen Thomas said he was really pleased with the defense and told us, “we work on defense 2 hours a day”. He says the one thing that can show up every single day is defense and allows you to stay in games when the offense is struggling. Thomas says they most likely lose this game if Capital’s offense scored 40 in the 1st half.

Eli Morton was selected as our Timberline Player of the Game for both sides of the ball and limiting the Cougar top offensive threat to just 2 points. The Blazers are now 9-1 and set to face their crosstown rivals North Thurston next Wednesday who also won friday night to remain undefeated at 10-0 and 15-0 on the season. The SSC title is on the line. Capital fell to 7-3 but remains solidly in 3rd place.