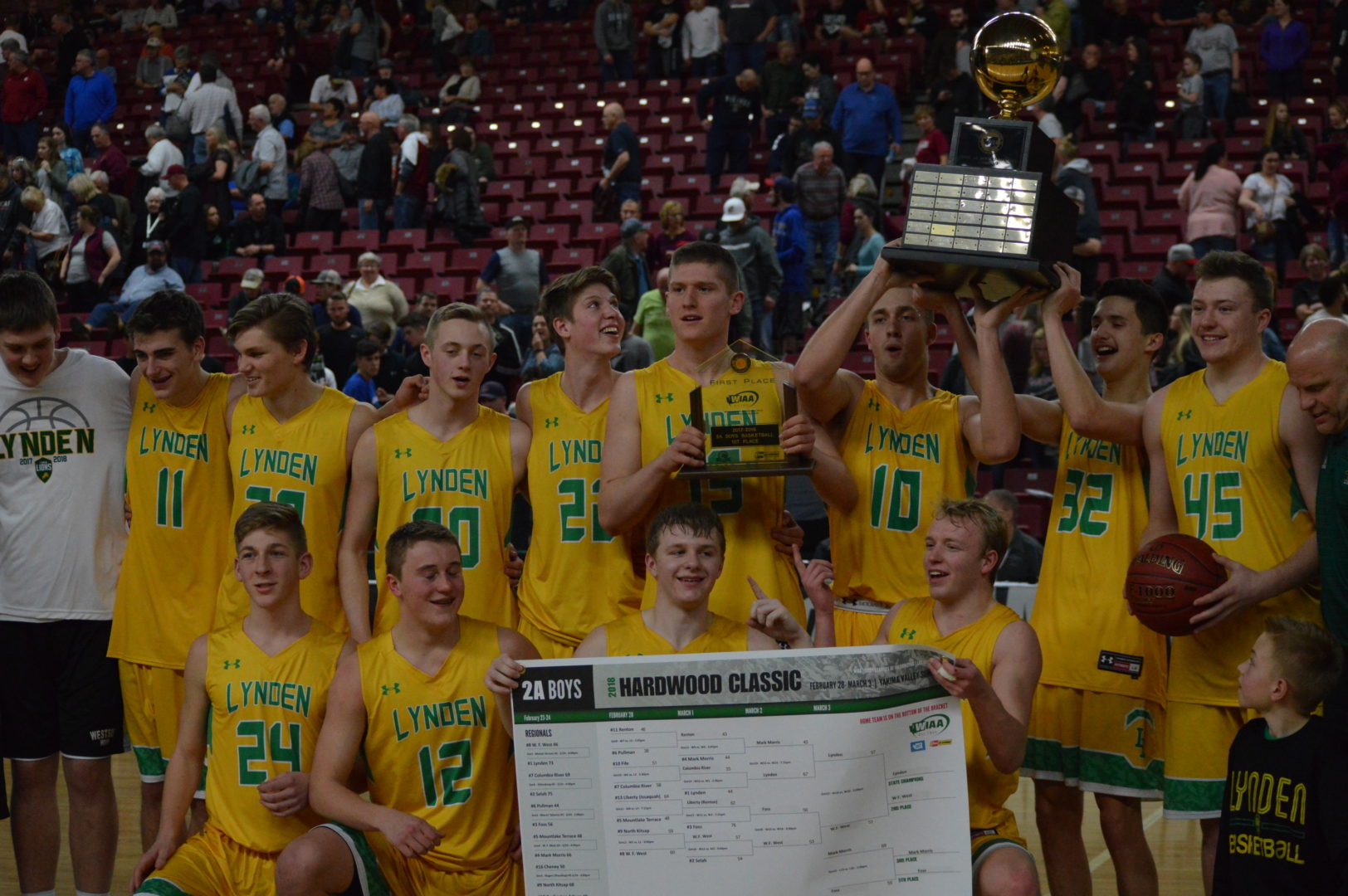 For two perspectives on the championship game, read more in both the Lynden Tribune and The Olympian.

Blown out of the semifinals by eventual champion Lynden, the Monarchs came back less than 24 hours later to claim third place over the 2017 champion Falcons.

“There’s been a certain spirit about these kids all year,” said Mark Morris coach Bill Bakamus. “They’ve been as resilient as can be. They’re hard working. They stuck to a plan. We’ve had some ups and downs. The fact we got up off the mat after a disappointing loss yesterday speaks volumes about them.”

Mark Morris (20-7) got off to a strong start with Tanner Vaillencourt scoring the first eight points as the Monarchs grabbed a 17-10 lead after the first quarter. Vaillencourt finished with 10 points, seven rebounds and a pair of assists plus high praise from his coach.

“I’ve been associated with basketball for 36 years and he’s one of the hardest working kids I’ve been around,” Bakamus said. “He has a competitive level that’s unmatched by many of the kids who have ever worn a Mark Morris uniform.”

The Falcons got a tournament-high equaling 36 points from guard Demetrius Crosby, but for the second straight game could not draw a bead from 3-point range, going 2-for-21 from beyond the arc. They had shot just 2 of 22 in Friday night’s semifinal loss to W.F. West.

Nonetheless, the Falcons did lead a couple of times.

Late in the second quarter, a steal and layup by D’von Santa-Cruz put Foss up 24-23. They stayed in front until a barrage of fourth-quarter free throws by the Monarchs sealed the deal. Tyler Berger, who led Mark Morris with 19 points, fueled by 12-of-14 foul shooting, made a pair a minute into the final period to give the Monarchs the lead back, 51-50, and they never relinquished it.

“We knew we had to be more aggressive and not settle. We settled a little bit too much (Friday) night against Lynden and the shots weren’t falling,” Vaillencourt said. “As a team we knew we had height on these guys, they had quickness. We knew if we attacked we could get them in foul trouble and control the game. “If you take it to them before they take it to you, you’re going to win the game.”

That they did. Of Mark Morris final 22 points, all but a short jumper by Tyler Berger’s twin brother Garrett came from the free-throw line.

“Mark Morris is a good team,” Foss coach Mike Cocke said. “They run their stuff, the Berger twins are good, coach Bakamus does a great job. We had our hands full from the beginning, we wanted to speed the game up. We did that for a while, but we could only get one guy going offensively.”

Mark Morris had four players in double figures: Tyler Berger, Garrett Berger with 15, Zach Rismoen with 14 and Vaillencourt with 10.

It’s the Monarchs’ highest finish since 2008, when they also placed third. It also avenges last year’s first-round defeat to Foss.

The Chieftains got a team-high 17 points from second-teamer Jacob Hjort, while Evan Dirksen scored 10 points and grabbed 9 rebounds.

Clayton Whitman and Christian Zamora were red-hot for the Lions.  Whitman scored 21 points, shooting 8-for-12 from the field while Zamora added 18 on 6-for-8 shooting.

Garrett Berger led the Monarchs with 18 points on 8-of-14 shooting, but the rest of his team mates shot only 27 percent.  Tyler Berger added 12.

There were some dicey moments near the end, but ninth-ranked W.F. West never trailed, built as much as a 14-point lead and held on.

“We’ve been tough all year but it’s really started to gel these past few weeks,” said Bearcats coach Chris White.  “These guys are resilient.  They love each other and believe in each other.  They loved the process and the journey.”

In their first round win over North Kitsap and a quarterfinal defeat of top-ranked Selah, the Bearcats had to come from behind.  This time, W.F. West (23-4) played consistently, scoring 14 points in each of the first three quarters and holding off the Falcons (21-4), even after they cut the lead to a single point, 51-50, near the end.

“I was so proud of my seniors’ mental toughness,” White said.  “It’s like a storm when you’re playing against (Foss pressure) defense.  They have tremendous speed and athleticism we can’t simulate in practice.  It is like a 98-mph fast ball, you have to just be tough and stand in there.”

The Bearcats played some defense of their own, leading 14-3 after one period and not allowing a field goal until a Demetrius Crosby drive to the basket early in the second quarter.

“We weren’t who we are during the first 16 minutes tonight,” said Foss coach Mike Cocke.  “You play 25 games and you get here and forget what those first 25 games were like.  We fouled too much, gave them 16 free throws in the first half.”

By the time the game was over, four W.F. West players had each made six free throws, including Brandon White, who led the Bearcats with 18 points, Bailey Cooper who scored 14 and Jordan Thomas, who just reached double figures with 10.  White, who made 4 of 7 three-point attempts and didn’t take a shot inside the arc, also added 7 rebounds and 3 assists. Crosby led Foss with 23 points while Micah Pollard added 11 and Kenzel Massey 9.

Brandon White has always been confident, but appreciates the way the 2A tournament has played out. “We all wanted to play for the state championship and we worked hard to get here,” he said.  “But I don’t think we really believed until we started playing here.”

Evan Dirksen led all scorers with 17 points and grabbed six boards. Nasseen Gutierrez added a double-double—12 points and 12 boards— while Jacob Hjort contributed 16 points, thanks to 3-of-6 shooting from 3-point range.

Jaloni Gardner paced the Indians with 12 while Deondre Russ added 9. Read more about the game in the The Columbian

Jake Elfstrom nailed 6 three-point baskets on his way to a tournament-high-game-equally 36 points, but it wasn’t enough as Liberty was knocked out of trophy contention.  Stephen Hei added 11.

Read more about the game in the Yakima Herald-Republic

Zach Rismoen hit a layup with 3.1 seconds to give Mark Morris the lead for good.  Tyler Berger scored 16 points to lead the Monarchs while Garrett Berger added 13 for the Monarchs, who move on to a semi-final at 7:15 Friday against top-seeded Lynden.

Renton, which will play a 12:15 p.m. consolation game against Columbia River, was led by Malik Coats 11 points and 10 more from Romero Otero.

Read more about the game in Longview Daily News

Christian Zamora had 14 points and 8 rebounds as the top-seeded Lions move into a 7:15 Friday semi-final against Mark Morris.  Clayton Whitman added 12 points and 6 rebounds.

Columbia River dropped into the consolation bracket and will play Renton at 12:15 p.m. on Friday.  Jacob Hjort had 16 points for the Chieftains.

Read more about the game in The Columbian

Micah Pollard scored 22 points and Demetrius Crosby had a 20-point, 10-rebound double-double as the Falcons advanced to a 9 p.m. Friday semi-final against surprising W.F. West.  Damani Kelly added 18 for Foss.

Read more about the game in The News Tribune

Selah got 26 points from Elijah Pepper and moves into a 2 p.m. Friday consolation match-up with Liberty.

The Indians shot just 29 percent in the first half and trailed at the break, 23-20, but upped their accuracy to 50 percent after intermission and pulled away in the fourth quarter to assure themselves of a slot in the quarterfinals, Thursday at 3:45 p.m. against Mark Morris.  Pullman is out.

Read more about the game in the Moscow-Pullman Daily News

Fife staged a furious fourth quarter rally, outscoring the Chieftains, 24-12 in the fourth quarter but wound up eliminated after falling behind by 20-plus early.  Columbia River moves on to face top-seeded Lynden in a quarterfinal Thursday at 5:30 p.m.

Jacob Hjort led Columbia River with 16 points, including 5-of-9 from 3-point range, and also had three assists.  Nate Snook added 13 points and Evan Dirksen had 12.  Malachi Afework paced the Trojans with 16 points while Gannon Gannis scored 11 and had 8 rebounds.

Read more about the game in The Columbian

The Patriots rallied from an 8-point deficit after a quarter to blast the Hawks and move on to a 7:15 quarterfinal game Thursday against Foss.  Mountlake Terrace was eliminated.

Read more about the game in the MLT News

Jordan Thomas sank a free throw with less than two seconds remaining in overtime to give the Bearcats the victory.  They move into a 9 p.m. quarterfinal with Selah on Thursday night.  North Kitsap is out.