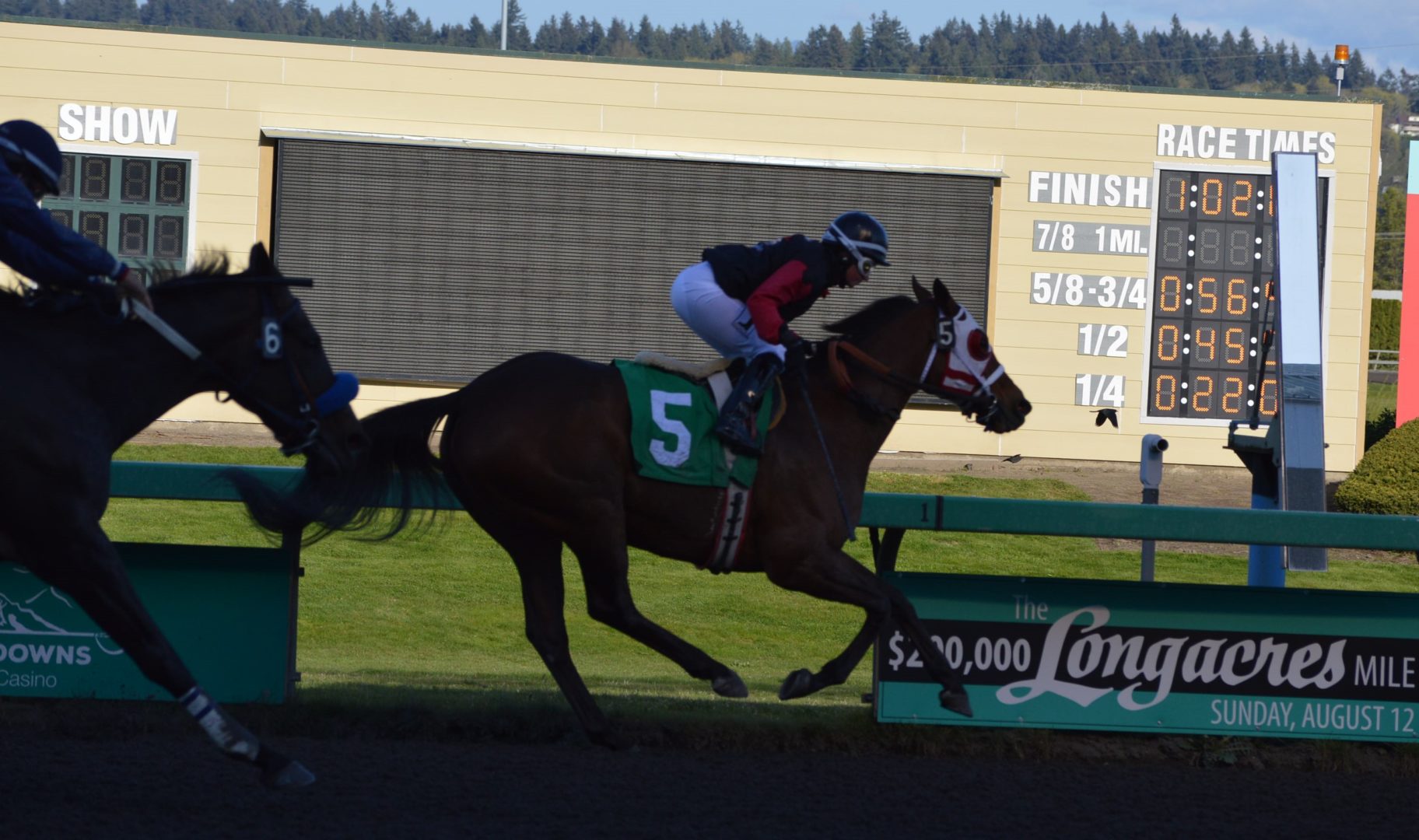 Mary Lois upsets in 1st Feature Race of the 2018 Season!

(Auburn, Wa) The last time we were in the Emerald Downs Winners Circle in 2017 was on closing day for the 2017 season where we interviewed jockey Jennifer Whitaker and trainer Howard Belvoir after winning the Gottstein Futurity with Elliott Bay. It’s like Groundhog day as we begin 2018 where we left off in 2017 with Jennifer Whitaker piloting as feature race win for trainer Howard Belvoir aboard Mary Lois.

It wasn’t the Gottstein but rather a competitive Starter Allowance race with an over whelming favorite starting to her immediate outside in Exit Sixty Slew. Exit Sixty Slew from the powerful Blaine Wright barn had been off since last October. She won the Washington Cup for Fillies and Mares Championship just 2 races back and went off as the odds on choice with new to Emerald Downs jockey Austin Solis aboard.

Whittaker broke well but took Mary Lois off an early contested pace and slipped over to the rail in this 5 and half furlong contest. Mary Lois and Whitaker sat behind the inside horse Lovethisbar along with Unbroken Code and Weaveittobeaver. Those speed went head-to-head to the top of the stretch when the three drifted off the rail leaving an opening for Mary Lois and Whitaker asked the 9-year-old mare for a little gas and as normal Mary Lois responded and took a half length lead at the top of the stretch.

Mary Lois drew off to a couple length lead and only had to had off the favorite Exit Sixty Slew who took the long way, circling the field after laying well off the pace and came charging down the outside but Mary Lois had already given the field the slip and finished in front by a length and a half. Mary Lois stopped the clock in 1:03.08 and returned a nice $14.00 for the $2 win but you can tell the amount of money bet on Exit Sixty Slew as it crushed the place and show pools with Mary Lois returning only $3.40 and $2.40  while Exit Sixty Slew returned $2.10 and $2.10. Lovethisbar with Rocco Bowen held the 3rd spot and paid $3 to show.

Whitaker added to her total as being the all-time winningest woman jockey at Emerald Downs while Belvoir picked up his 18th opening day win also a record for Emerald Downs. Rick Southall was the winning owner.

Odds and Ends from opening day!

*Some were surprised to see the twice defending jockey Champion Rocco Bowen back at Emerald Downs after announcing last fall he was going to stay in California and ride at Golden Gate and maybe southern Cal. Bowen was having a hard time getting any big momentum behind him and decided to come back to Emerald and quickly showed it was a great move winning 4 races on the opening 10-race card. Bowen got things started guiding 1-9 shot Wine At Nine to an easy win in the 4th, then completed the daily double with Rojo Bou Peep in the 5th returning $4 and the $1 Daily Double paying $2.40, then won the 6th with Soolaimon at 7-2 for an all Bowen Pick 3 that returned $6.90. Bowen got his 4th win in the 7th to finish his superfecta of wins returning $5.20 and this Pick 3 $16.45. The final of 3 straight Daily Doubles for Bowen paid $20.80.

*Record Pick 5 pay-off of $23,306.55 for the 50-cent bet. Although big favorites were beaten seems like more than 1 person would have cashed on this pick-5 result but only 1 lucky winning ticket swept the pot. Bowen won the 1st 2 legs in the 6th and 7th. The longest shot of the 5 came in the 8th with Spot On, a 1st time starter for Trainer Kay Cooper that went off at 18-1. Austin Solis won his first Emerald Downs race on this one. Solis the son of Hall of Fame jockey Alex Solis moved his tack from So Cal to Emerald for the 2018 season. Mary Lois was the 4th winner and then Desert Black at 7-2 completed the pick combination. Only 2 horses paid double digits. The odds were 7-2, 5-2, 18-1, 6-1 and 7-2.

*Opening on a Sunday? Track President Phil Ziegler decided to try something different this year and that was to open on a Sunday hoping the 1-day opening race weekend would create a large card and good fields. He certainly was ‘Spot On” with his thought as 10 races were fielded and the betting handle was up an amazing 50% over last year’s Saturday opening day. We’re not sure if the 1 day total surpassed last year’s 2-day opening weekend handle but the 1.9-million dollars has to be close. Plus there were big betting favorites that won satisfying the newcomers and the favorite betters but also several longshot’s with a chance to win big money as referenced in the record Pick 5 pay-out.

*New riders make their mark! Austin Solis, Patrick Henry Jr and Gary Wales all found their way to the Winner’s Circle. Henry won the opener aboard Of Good Cheer a 10-1 outsider for conditioner Kay Cooper. Solis also won for Cooper on Spot On in the 8th the 18-1 upset winner and Wales won 2, the 2nd race on Run Scout run at 9-1 for trainer Vince Gibson and the finale aboard Desert Black at 7-2 for trainer Jeff Metz.

*3 Trainers doubled up! Again Kay Cooper was one of 3 trainers with 2 wins, Vince Gibson won the 2nd race with a 9-1 shot and then the 1-9 overwhelming winning in the 4th with Wine at Nine. And Jeff Metz took a pair of wins taking the 7th with Please Be Me and the finale with Desert Black. It was a strong day for regular Emerald trainers as they took 9 of the 10 races with the 3 with doubles and Belvoir. Joining them were Joe Toye and Junior Coffey. The final trainer to win was Randy Abrahamson who won his 1st Emerald Downs race in the 6th with Soolaimon.

Racing resumes with day 2 next Saturday.

Emerald Downs: Victor “The Predictor” Cozzetti passes away at 93