Evco 2A Baseball: Wolves put up 5 spot in 7th to nip Tigers 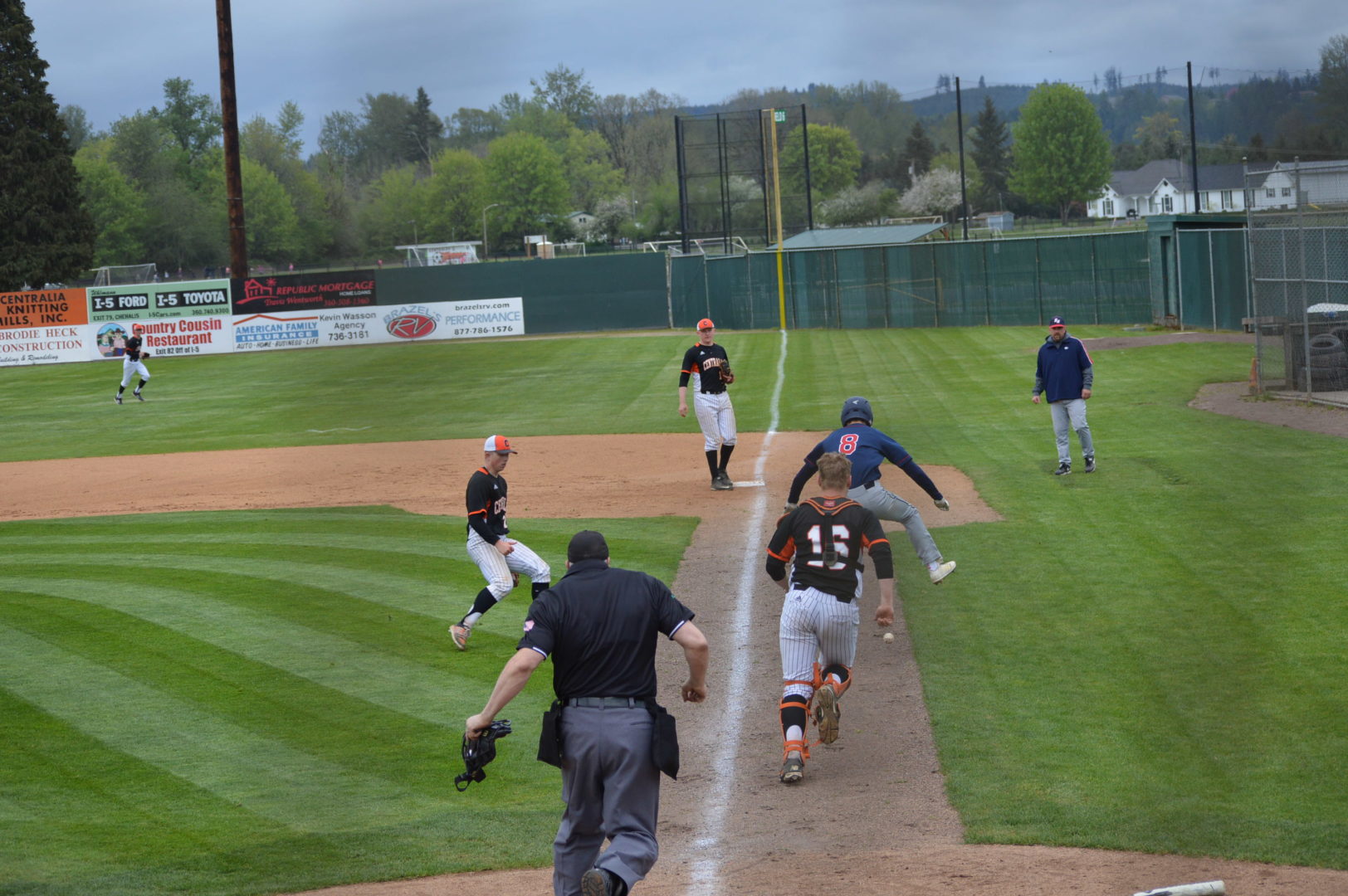 (Centralia, WA) A win for the Tigers would lock up 2nd place and a home District game with still a chance to run down front WF West while Black Hills was looking to take another step closer to clinching 3rd place with a shot at 2nd but were in a must win situation. The Evco 2A will wrap up league play next week.

Centralia jumped on the Wolves in the bottom of the 1st against starting pitcher Jake Perry when Jeremy Wood got on by error. Wood was forced out at 2nd when Jerrod Frias lifted high pop fly to left field but Alex Nagy dropped the ball as Wood was headed back to 1st on what he thought would be a caught ball, Nagy easily picked up the ball and threw him out at 2nd for the 1st out. Kolby Sharp was then hit by a pitch followed by a base hit from Colby Steele and the bases were loaded with 1 out. Broc Selstrom then grounded a ball at Wolves 1st baseman Sammy Flasig who scooped and flipped it to Perry for the 2nd out but a run scored to put the Tigers on the board. Derek Beairsto then singled driving in 2 runs and the Tigers led 3-0.

Black Hills got 2 of those runs back in the top of the 3rd when Nagy led off by getting hit with a pitch and Jacob Nelson walked. Taylor Simmons sac bunted them over to 2nd and 3rd and Perry then helped his own cause with a 2-run base hit to pull within 1 after 3. The 2 teams held their position until the bottom of the 5th where Centralia added an insurance run Frias scored on an RBI base hit from Colby Steele. The Tigers then looked like they would put away the Wolves in the bottom of the 6th with 2 more runs. Selstrom got things started with a lead-off double followed by Beairsto bunting him to 3rd and making it safely to 1st when the Wolves tried to get Selstrom at 3rd. Cameron Erickson then knocked in Selstrom with a ground oout to short and Nolan Miller grounded out to 2nd but that allowed Chris Kirner, who came in to run for Beairsto, to score and it was 6-2 heading into the top of the 7th.

Frias had started the game for the Tigers and went 6, Jackson Hull came in to close out the Wolves. Black Hills was regretting leaving 7 runners on base staring a 4 run deficit in the face with just 3 outs to work with which quickly turned into just 2 as Simmons grounded out to lead off the 7th. Hull then lost the strike zone and walked Perry, Bryce Kincey and Zach Loveless to load the bases. Hull was replaced by Beairsto who walked the 1st batter he faced Dustyn Dalebout who picked up an RBI and it was 6-3 with the bases loaded and 1 out. Wyatt Rollman then grounded a ball to Beairsto to get the lead runner and prevent a run, Steele then fired it down to 1st but Rollman had hustled down the line and was safe but now the bases were loaded with 2 outs.

Josh Rodgers then came through with a base hit to make it 6-4 with the bases still loaded when Nagy came to the plate in the most critical bat of the game. Nagy worked the count full and with the pitch the runners took off and Nagy topped the ball to the left of Beairsto who tried to make a play and by the time a throw got to Selstrom Nagy legged out a 2-run infield base hit and the game was tied with runners on the corners. Nagy then took 2nd as the Tigers let him making sure Rodgers stayed at 3rd. Nagy then took a massive lead toward 3rd, such a big lead that Beairsto couldn’t resist going after him and as he got into a rundown Rodgers took off for home and scored the go-ahead run while Nagy scrambled to 3rd. On the next pitch Nagy then got into a run-down up the 3rd base line and the Tigers were able to tag him out this time for the 3rd out but the damage was done and Black Hills led 7-6.

Taylor Simmons replaced Perry on the Hill and got Sharp and Steele to fly out to the outfield and then struck out Selstrom to end the game giving the Wolves a remarkable comeback victory and a chance at 2nd place with 3 games to play. Centralia did beat Black Hills twice earlier this season to hold the tie breaker. Our Pacific Sports Spa Players of the Game went to Black Hills’ Alex Nagy and the Tigers’ Colby Steele and our Thorbeckes Sportsmanship Award went to the Wolves’ Jake Perry.