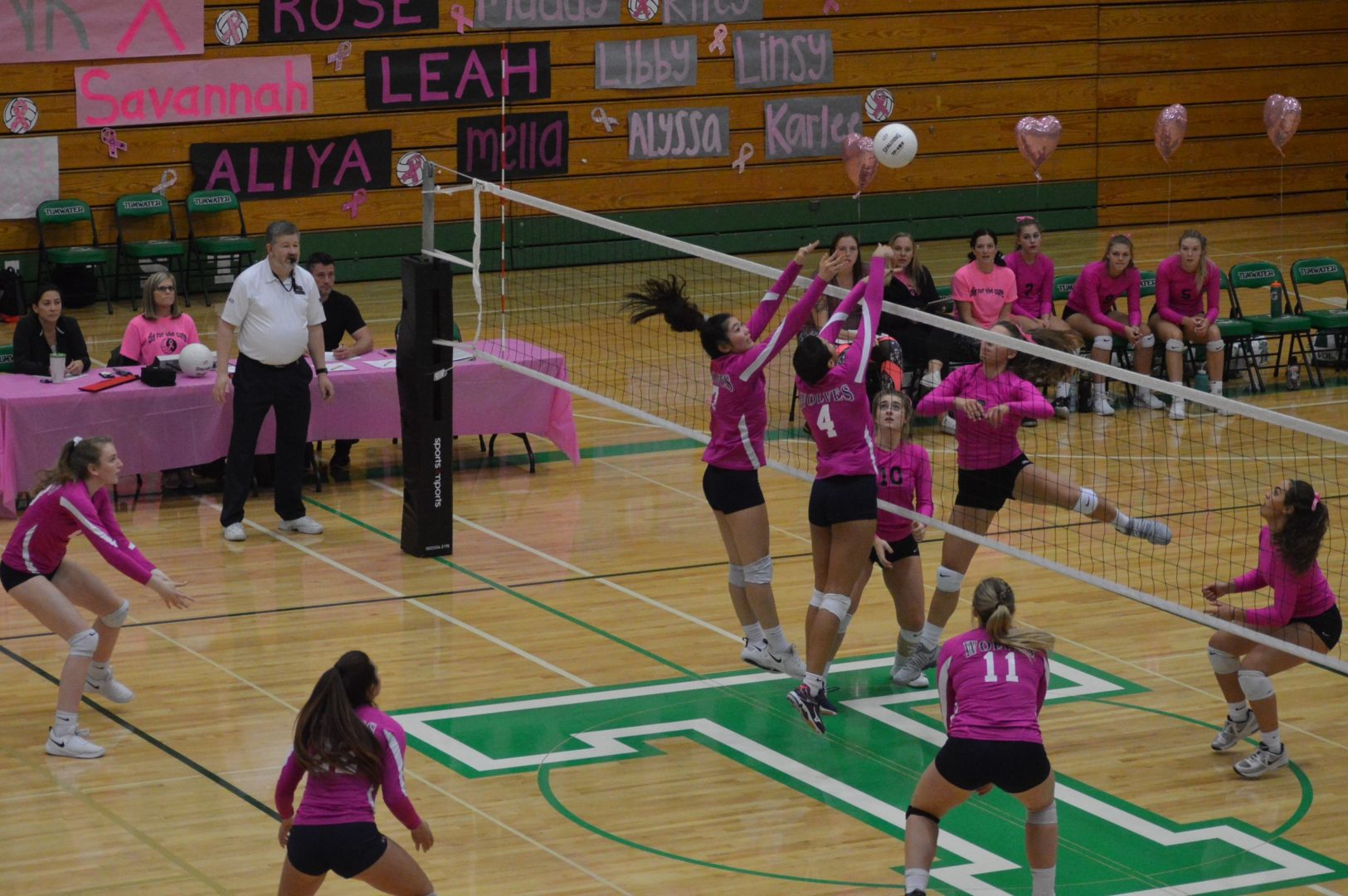 (Tumwater, WA) Halloween, 2013, 31 league games ago was the last time the Tumwater T-Birds suffered an Evergreen 2A Conference league loss and it was to a team no longer in the conference or even the 2A classification the Capital Cougars. The T-Birds ended up sharing the 2013 league title with the Cougars and would go on to take 6th at State. New Head Tumwater Coach Emma Schuster knew the pressure of taking over for legendary Coach Tana Otton who racked up 3 State Championships, 3 2nd place finishes plus 3 other top 8 finishes. Schuster had the T-Birds rolling again this season but the Black Hills Wolves have a pretty good post season history themselves but its from 10+ years ago. Last year they got back to the State Tournament for the first time since 2011.

Black Hills Coach Jessica Prigge has worked the turn-around and getting the Wolves back as contenders but one of the biggest hurdles was to finally knock off their crosstown rival Tumwater. Last night the 3 trees up front for the Wolves were spectacular led by Hannah Rongen. Rongen earned our Black Hills Player of the Game with booming kill shots, smothering blocks and serving from the back line. Maisy Williams also added some crazy hard kill shots and perfect directional returns and also success from the service line including serving the last 5 points to clinch the win. The 3rd 6-footer Madison Shepler also made her presence known as they controlled the net from the beginning and added some pounding kill shots.

The Wolves took control from the start with a 25-20 opening set win. Kailie Storm got things rolling with a 4 point service giving the Wolves a 9-8 lead. Shepler then ran off 3 points, Maisy Williams punched in 3 to make it 21-17, Williams also killed it to end the 1st set 25-20. In the 2nd set the Wolves would quickly put the T-Birds in a 7-3 hole and Tumwater would never lead through out the match. There no long service runs but only once during a Wolves service did the server not win at least 1 point. Black Hills kept the ball in play forcing the the T-Birds to make plays and did not have any unforced points at the line or shots out of bounds and it took a toll on the Birds as the Wolves just kept pulling away for a 25-17 win.

Tumwater dug in and got an early boost from a 4 point serve run from Savanah Sleasman, Sophia Koelsch then ran off 3 and the T-Birds jumped out to a, 11-5 lead and never looked back. Koelsch almost finished it off with a 20-16 lead scored 4 and then won it on the next point to force a game 4. It looked like the T-Birds were not ready to give up that win streak as Karmella Gearhart ran off 7 straight serves to start the set with a 7-0 lead. The Wolvwes settled back down and stopped trying to get to perfect by hitting perfect line shots and sideway sets and got back to putting the ball in play.

That pressure wore on the T-Birds as the Wolves chipped away at that deficit. There were several trading of points but the Wolves had closed to an 18-16 difference down 2 when Ainslee Eberle fired off 2 to tie but the T-Birds scored. Koelsch was back at the line hoping to give the Birds some breathing space and scored just 1 before the Wolves took over. Maisy Williams stepped to the service line and would pick up an ace then Rongen would blitz a shot down the line up next Shepler ripping the cover off the ball and it was 24-20, Williams then lost the point but a T-Bird was called for running into the net and that ended a 5 year and 30-game league winning streak and created a 3-way tie at the top of the EVCO 2A with Black Hills, WF West and Tumwater all 4-1 and each beating each other setting up an interesting 2nd half of the Evco 2A schedule.

Black Hills takes on Rochester next while Tumwater hosts WF West in a showdown between 2 of the top 3. Our ESN Players of the Game went to the Wolves’ Hannah Rongen and the T-Birds Savannah Sleasman.