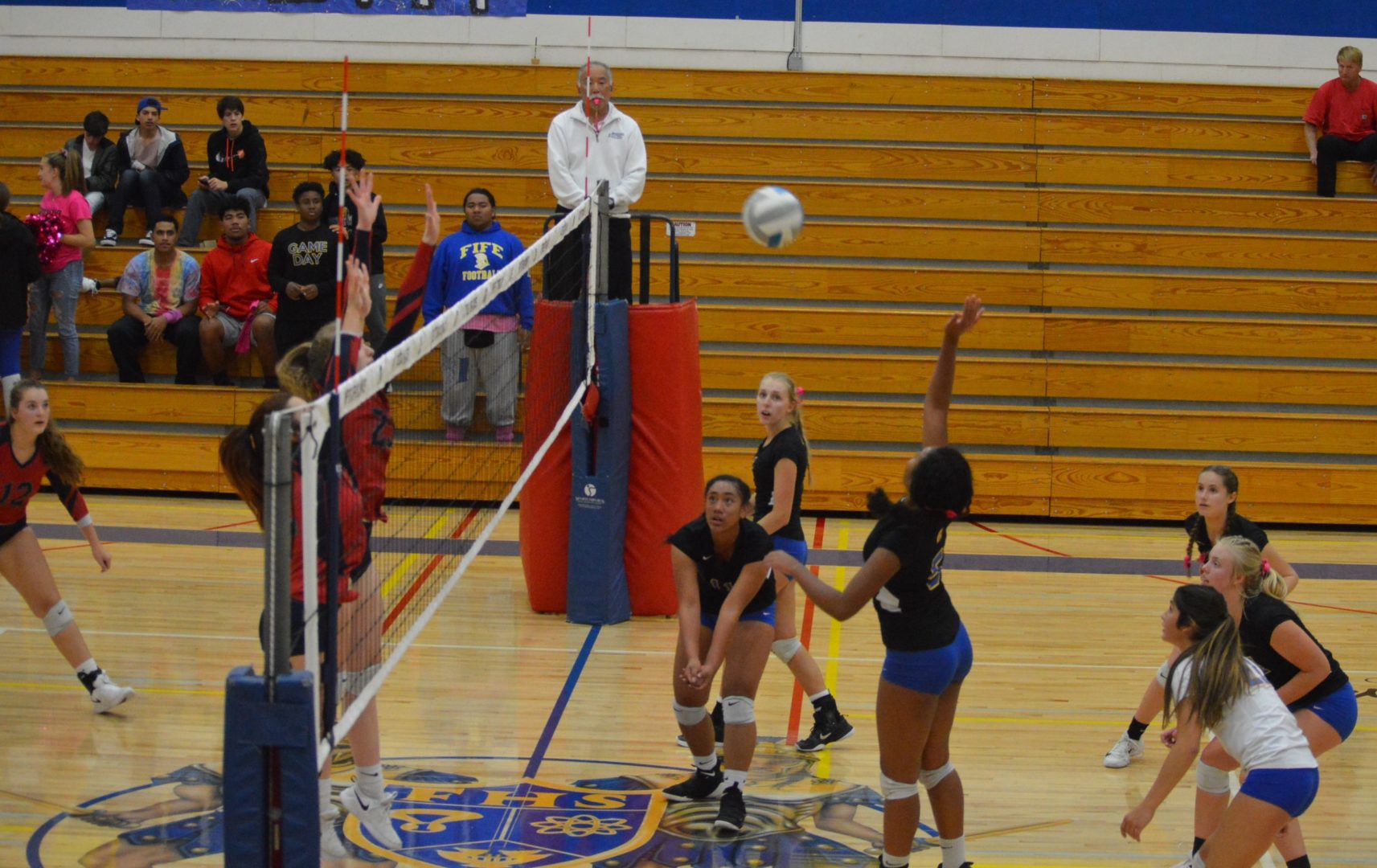 (Fife, WA) The Fife Trojans came into the match 12-0 and unbeaten but all of their matches have been within the SPSL 2A except for one non-league match, a 3-1 win over Todd Beamer back on September 24th. That set was one of only two sets they have lost all year. Meantime, the Wolves come in to the non-league showdown with a 9-2 record but on a 5 match winning streak including a redeeming win over Chehalis one of only 2 matches they had lost earlier in the season.

Both coaches, Fife’s Katy Ferguson and BH’s Jessica Prigge felt this was perfect timing for this match and will be a real yardstick as to where each team is and what they will need to work on. By the end of the match you could say the Wolves list to improve on things is longer than Fife’s although no doubt Coach Ferguson will have plenty to share with her team on where improvement needs to be made.

The 1st set was a set of runs led off by Fife’s Yasmyne Valladares who ran off 8 straight points and by the time she was done had spotted the Trojans a 9-2 lead. Tevlin Britten and Casonndrah Polo were great supports setting and killing to help keep Valladares’s serve run alive.

Black Hills would battle back led by Ainslee Eberle who pulled the Wolves within 1 13-12. But Fie answered with Elsa Linden who fired off 6 straight including an ace to push the lead to 20-13. Valadares would finish with the final 3 points for an easy 25-15 1st set win.

In set 2 the Wolves had their best chance to get a win. Neither team strung together long scoring runs but rather both chipped with Hannah Rongen and Madison Shepler had multiple point serves but the big turning point came with Fife leading 20-18. Maddie Scott then reeled off 3 straight to push it to a 23-19 lead. Eberle then scored one and got the serve back with the score 24-21 with Maisy Williams serving. Williams needed to score 3 to push it to extra time and she scorded 2 and had momentum on her side when Fife took a time out trying to snap her run and clinch set two on the 3rd set point. The time-out worked and the return was not pushed back and the Trojans took a 2-0 lead.

Fife once again used a big run at the service line to not only put away the set but the match. With a 5-4 lead Casonndrah Polo fired 2 aces and 5 points and doubled up the Wolves 10-5, a deficit they could not dig out from. Jocelyn Scott and Lauren Anderson added to the point total with some strong net play from Dominique Dizon-Andre was more than enough for the Trojans to put away the Wolves 3-0 with a 25-17 3rd set win.

Fife improves to 13-0 on the season and Black Hills drops to 9-3. Our ESN Players of the Game went to Fife’s Casonndrah Polo and the Wolves’ Ainslee Eberle.