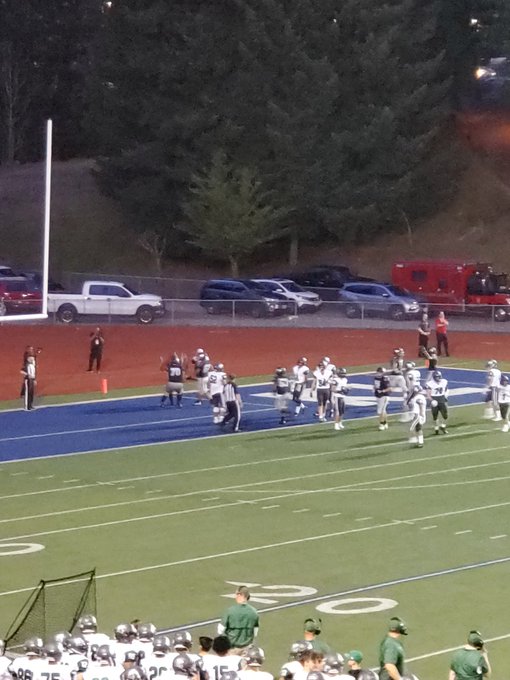 Week 1 of the High School Football season is in the books and 5 of the 6 defending State Champions picked up where they left off. 2 points was the difference in a 6-0 run for these teams when 2A Cheney held off 1A 2018 State Champion Colville 21-20.

1B Odessa led Pomeroy 70-0 at the half before posting a bruising 76-8 win. 2B Champs Kalama hosted 2A Woodland and the Chinooks beat the Beavers, a play-off team last season, 26-7.

The Hockinson Hawks are 2A 2-time defending champions and most selected them to win a 3rd title but lost their all-everything receiver Sawyer Racanelli (UW bound) to a season ending knee injury that occurred during spring drills. The Hawks showed they were a lot more than just Racanelli as they pounded Toppenish 48-7. The Hawks will get a stiff test this coming Friday when they host Archbishop Murphy.

3A Eastside Catholic began a string of 3 straight games of playing out of state teams starting with Grant High School from Sacramento, California. The Crusaders came away with a 47-20 convincing win. Up next they face Central Catholic from Portland and then they host Pinnacle High School from Phoenix, Arizona.

And 4A Union did face a stiff challenge from crosstown rival 3A Mountain View and trailed the Thunder for much of the 1st half. The Titans pulled to a 14-10 halftime lead and pulled out a 20-10 victory.

In the Eli games we had on the air for you we began with a huge win by Kentwood over Skyline. The Spartans jumped out to a 3-0 but the Conks got things rolling and fired off 29 unanswered points for a convincing 29-3 victory.

Also on Thursday, West Valley (Yakima) traveled to Kamiakin but it was the Braves who came out with a big home win. Kamiakin knocked off the Rams 46-24.

On Friday we had 4 games on the schedule and once again we were in Kent where Todd Beamer held off Kentridge in a slugfest 11-7. Only a 2-point safety was scored in the 2nd half on a snap over the punter’s head as both defenses dominated in this opening night contest.

2A power Tumwater showed they were once again going to be a serious factor as they crushed 3A Timberline 55-0 at Tumwater District Stadium. Kelso handed Mark Morris 48-0 loss at Longview Memorial. And Skyview spoiled the opening night of the new field turf in Yelm belting the Tornados 33-13.

Week 2 is going to be even more interesting and we are still finalizing our schedule but check it out on the Live Broadcast page.