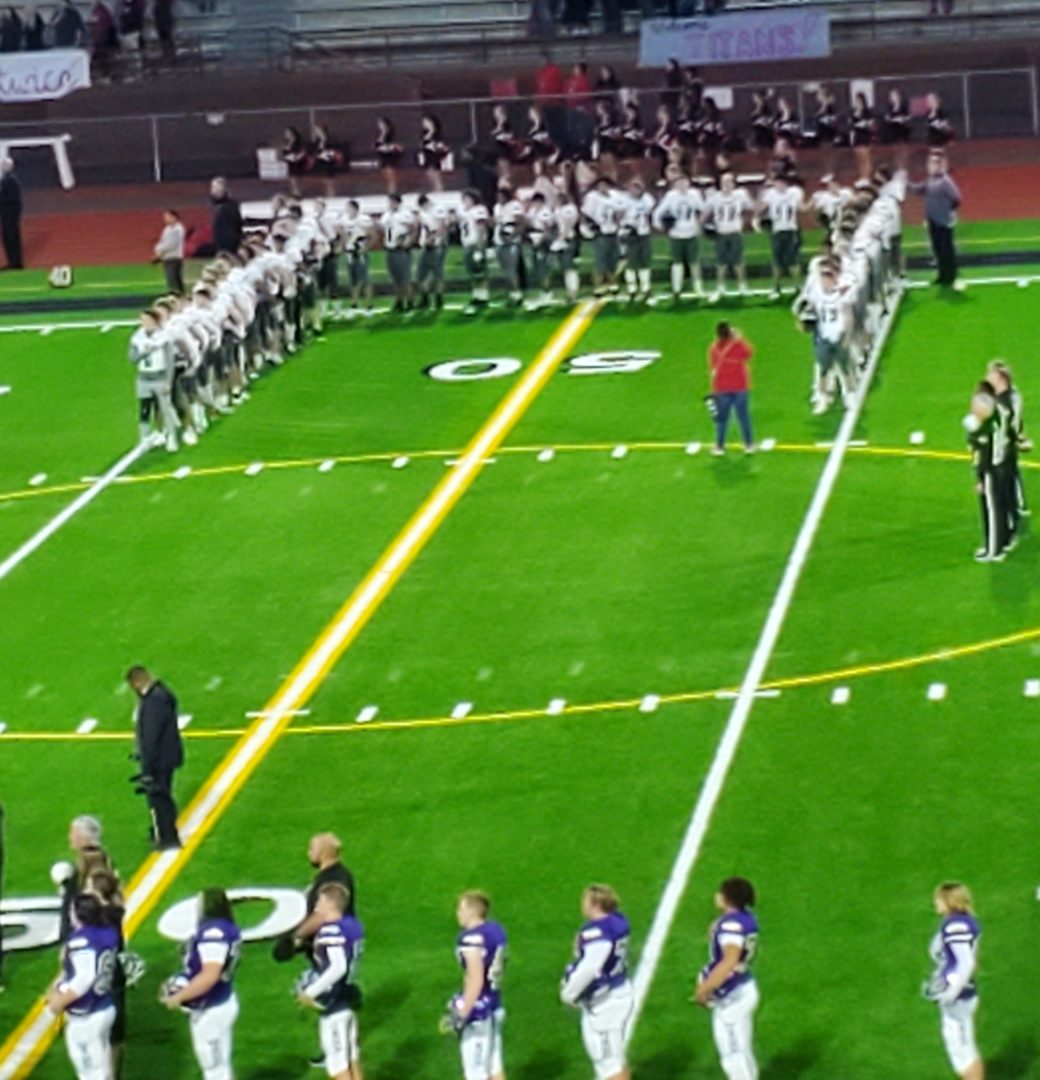 It was a crazy night at Sparks Stadium on Saturday night with the 3rd match-up between Union and Puyallup in the last 12 months. This newly formed rivalry saw Union sweep both games with big 4th quarter comebacks. Could they do it again? That answer and another great showdown between Eatonville and River Ridge from Friday night were the highlights of the game broadcast on the Eli Sports Network this past weekend. See the scores, stories and links below.

In what was an early candidate for game of the year, the Vikings finally took down the Titans.

The match-up between Union and Puyallup has quietly become a rivalry. The teams met twice last year, with Puyallup controlling most of those games. However, the 4th quarter was really where the Titans shined as they ended up winning both games in the final 12 minutes. The later match-up saw Union knock off Puyallup in the State Semi-Finals then went on to blow out Lake Stevens for the 4A Championship the following week.

Saturday’s game was a chance for the Vikings to finally get a win over their Vancouver opponent. On their home field, in front of a packed house.

It couldn’t have started any better for the Titans on the road. Quarterback CJ Jordan broke out for a 57-yard touchdown on the ground. With the PAT through, Union had an early 7-0 lead.

Puyallup took over after that point with a big run game in the first half that just couldn’t be stopped. Isaiah Dickerson and Kyler Johnson combined for 4 touchdowns on the ground in the first half as they helped the home side take the lead and extend it to 28-7.

Jordan was able to pickup one more on the ground before half for Union, as we went to the break 28-14.

**This was the 3d TD scored by Puyallup 1st set up by a tremendous Jordan Dwyer catch followed by an Isaiah Dickerson TD plunge.

The second half is where the fireworks began to fly. After getting the ball to start the half, Puyallup was stopped by the Titans and had to punt. Union started to march down he field and looked like they were going to score, until an interception killed the drive and gave momentum back to the Viks.

Puyallup scored off the turnover with a drive capping, 8 yd TD to Dwyer to put their lead at 35-14.

Then came the 4th quarter, the final 12 minutes of the ball game. The quarter that just seemed to be the achilles heal of the Vikings when it came to playing Union. For a good portion, it looked like history would repeat itself again.

The Titans went on a 21-0 run to open the quarter. All their TD’s came on the ground courtesy of Vihn Luong, Jordan and Jones. The Jordan and Jones TD’s only came 4 seconds apart from each other as the kickoff was recovered by the Titans inside the Puyallup 5-yard line.

You could feel the crowd tense up, as flash backs of seasons past popped into their minds.

Puyallup did it’s best to calm those nerves. At the 2:26 mark in the 4th, the Vikings drew up a play that had running back Kyler Johnson throwing a touchdown to receiver Jordan Dwyer that put them back out in front 42-35.

Union tried to steal one more from Puyallup, as an untimed down led to them scoring a touchdown with zeros on the clock. After attempting to score a 2-pt conversion, a penalty backed them up for a second attempt. This time going for the PAT, the kick was just short. Putting an end to another comeback victory.

The Vikings were finally able to exercise the demon that was the Union Titans. Although this wasn’t a league game for either side, it still felt like one of the biggest games of the year. Momentum for the rest of the regular season surly was secured on this night.

*This is the touchdown that pulled Union wihtin 1 and then the 2 PAT attempts.

This game turned into a track meet and a pair of missed extra points ended up being the difference in the game. Ridge jumped out to an early driving 63 yards in less than 2  inutes and scoring on a 2-yard touchdown plunge Darion Brown to take a 7-0 lead. The defense then held forcing the Cruisers to punt it away when Dontae Owens burst up the home sideline for 65 yards and a touchdown but a yellow flag brought the play back and took the points off the board, for the time being.

The drive ultimately ended in another 7 points, or certainly lewd to it as the Eatonville defense tightened and forced a punt when the snap went over the head of the Hawks punter and the Cruisers recovered on the Ridge 10. After a false start and a 3 yard run QB Caden Jumper hit Alex Brymer for a 12-yard strike and it was tied at 7-7.

River Ridge answered with another solid drive and Daruion Brown scoring on a 3-yard run for a 14-7 lead. It then looked like the Cruisers were going to answer the bell as this back and forth was well underway when disaster struck for Jumper. Jumper dropped back to pass from inside the 20 of the Hawks looking for a receiver when he was pressured and 2 receivers were in the area and Jumper hesistated for just for a moment that got the ball out a touch late giving the very fast Owens time to break and pick the ball at the goal line and he was gone 100 yards for the Hawks score and they surged to a 21-7 lead.

Dontae Owens takes it to the house 100 yard INT

There was no panic on the Cruiser sideline in fact they would have an answer in about 8 seconds when Jakob Lucht took the ensuing kick-off 81-yards to the house and E-ville was right back in it down 21-14.

The scoring frenzy was not over on the next drive the Hawks again stretched it out to a 14 point lead with a little trickery when QB Jevon Brown pitched the ball to Darion Brown who set up and delivered a bullet to Owens in the endzone and it was 28-14. Eatonville would fumble the next drive followed by a missed field goal by River Ridge.

Eatonville would get the ball back on their own 20 and this drive saw Jumper start to assert her physical dominance and take over of the Cruiser offense when he capped it with a spectacular 31-yard scramble and then run through would be tacklers he would not be denied for the score and we’d go to halftime with the Hawks holding a 28-21 lead.

*Caden Jumper scores just before the half

The Cruisers received the 2nd half kick and just like Ridge went on a very efficient and steady drive going 67 yards and was finished off with Jumper pounding in from the 1, Job Kralick added his 3rd PAT but it would be his last as he was injured playing defense and did not return.

The Hawks got a big kick return from Owens to the 49 and then caught the go ahead TD from Jevon Brown for a 9-yard score but the first of 2 PAT mistakes took place when Eatonville busted through and blocked Jacob Miller’s attempt but still led 34-28. The Hawks then had a chance to put a ton of pressure on the Cruisers after holding them and forcing a punt but the old saying is turn-about is fair play and Jakob Lucht timed his break perfectly intercepting a Hawks pass at the 46 and took it 54-yards for the touch down, back-up PAT kicker Trevor Schier stepped up and finished it to give Eatonville their first lead.

*The Cruisers Jakob Lucht picks the Hawks, gathers a posse and scores

But the back and forth would continue as the Hawks took over with 2:45 to go in the 3rd on their own 36. It would end in less than 3 minutes and on the 1st play of the 4th quarter when Jevon Brown found tightend Keianu Trinidad for a 19-yard scoring connection. Hawks Coach Steve Schultz then elected to go for 2 to try and get back to a 7-point lead but the 2-point play failed and they held a tenuous 5-point 40-35 advantage.

That 5 points woulds not hold up as the Cruisers would march down 60-yards and you know who plows into the endzone for the go-ahead and what would turn out to be the winning score Caden Jumper from the 3 yard line. Schier added the PAT and it was 42-40 7:55 to play. Seemingly the scoring couldn’t be done and it looked like the Hawks were going to re-take the lead when Eatonville’s defense came up with one of the many plays of the game and we believe it was Jager Roulst who stepped in front of the Jevon Brown pass again at the goal line to deny the Hawks the go-ahead score.

Eatonville would then drive the ball down the field running out the clock but the Hawks had one more chance with about 45-seconds to play the Cruisers had a 4th and inches and Head Coach Gavin Kralick put his trust in his O-Line and Jumper who overwhelmed a tired defensive Hawks front to pick up the 1st down and then wqent into victory formation to secure the 2 point win.

Eatonville improves to 3-2 over all and 2-0 in the SPSL Mountain division while River Ridge falls to 1-4 and 0-1 in the Mountain.

Our Pacific Sports Spa Players of the Game went to Eatonville’s Caden Jumper who finished with 234 yuards rushing and 3 touchdowns and passing for 133 yards for a total of 367 yards of offense. Jakob Lucht was also considered along with Zach Smith. For River Ridge even though Darion Brown ran for 239 scored 2 touchdowns and threw for Dontae Owens was our selection. Dontae’ 100 yard interception return for a TD along with 2 touchdowns on 6 catches for 81 yards tipped it in his favor.

*Brandon Jumper talk with ESN after the big win!

Ridgefield 24, Washougal 21 The Spudders pulled out a tight win over the Panthers in a GSHL 2A league contest. The Columbian’s Micah Rice has the story here.

Napavine 46, Adna 13 The Tigers left no doubt who the team to beat is in the Central 2B hammering their long time rival Adna. Lewis County Sports Matt Baide has the full story here.

WF West 66, Black Hills 7 The defending league Champion has clearly fallen on hard times as the Bearcats rolled it up on Friday night. Jordan Nailon from Lewis County Sports filed this story.

Prairie 38, Kelso 22 The Prairie Falcons are off to a 5-0 start for the first time in 35 years. The Columbian’s Meg Wochnik has the story here.

La Salle 46, Granger 0 The Lightning defense nearly blanked Granger holding them to just 10 yards for the game. La Salle’s big offensive night was led by Ryan Kershaw who made the most of his combined offense of 120 yards of combined rushing and receiving with 5 touchdowns.

Kershaw had touchdown runs of 5, 6, 1 and 15 yards and hauled in a pass from his brother Kieran Kershaw from 12-yards out. La Salle improves to 5-0 on the year and 3-0 in league. The Lightning will host North Mason next week in a non-league game.