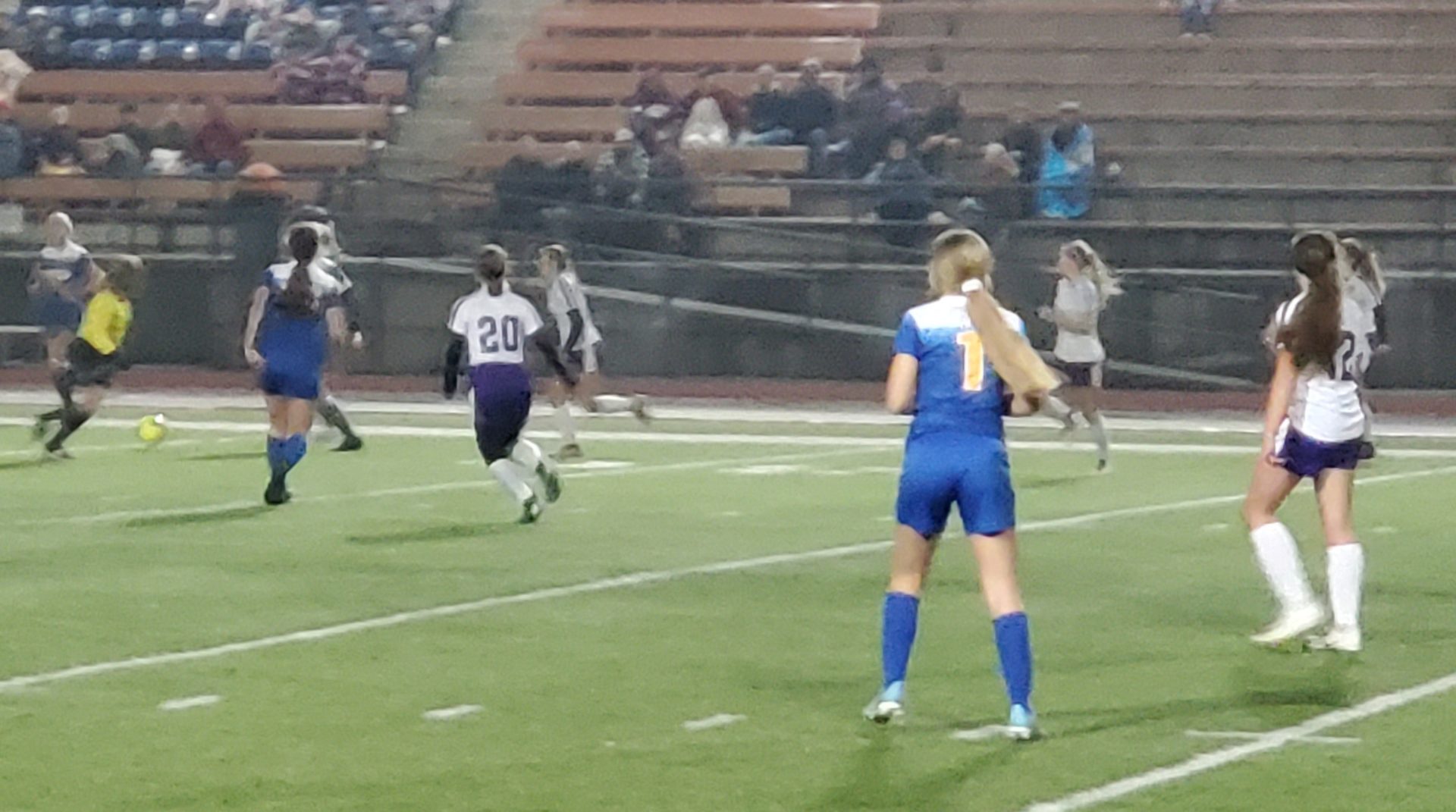 You can follow the District 4 2B Soccer Tournament round by round here.

10AM 3rd Place (Winner to State, Loser Out) Kalama vs Adna

(Centralia, WA) The Toledo Indians qualified for State for the first time since Toledo split with Winlock and the girls United team. Head Coach Noel Vazquez said coming into the match either they were going to finally achieve 2 goals they had not accomplished or not and they were beating Kalama and qualifying for the State Tournament. The Indians checked off a 3rd important goal during this same run last Saturday when they beat Life Christian and won their first District game.

Toledo and Kalama had faced each other twice during the regular season with the Chinooks winning both 2-0 and 3-1. After a 0-0 halftime score Toledo jumped out in front of the Nooks 1-0 when Marina Smith knocked in the shot just out of the break in the 42nd with a nice over the top floating shot that went in over the fingertips of Nooks keeper Mary Morrell.

Kalama would answer in the 47th when Kailey Shipley fired a low line drive shot that skipped under the outstretched hand of Indians keeper Kaylee Veigle and that is how regulation would end.

The 2 teams would battle through 2 5-minute golden goal overtimes with no change and forced to a shoot-out. Toledo went first and after 2 rounds were even at 2-2. In round 3, after Smith knocked in her PK to make it 3-2, Kalama’s 3rd shooter Shipley would then push the ball wide to the right and Toledo led 3-2. The 4th shooters would both make their shots and as Toledo entered the 5th round all they need was for Maryssa Peters to knock in her PK and that would clinch the win. Peters went into the upper right corner and the ball hit the back of the net sending the Indians to State.

Toledo has now qualified to the State 2B Tournament and can win the District Championship on Saturday at Kalama against Adna/Onalaska. Kalama will face Adna/Onalaska at 10am in a winner to state and loser out contest. The Thorbeckes Players of the Game were Toledo’s Vanessa Rodriguez for her defensive efforts and Kalama’s Brooke Milohov who also had a strong performance.

(Centralia, WA) The top ranked Adna Pirates had all the cache coming into this showdown with 5 straight top 4 finishes at the State Tournament having beat the loggers several times in a row while the Loggers have a spotty history at state with 4 appearances but only 1 win and never getting out of the quarterfinals and struggling against the Bucs in each contest.

The two teams appeared they would finish in a scoreless tie at the half but Adna’s Payton Aselton in stoppage time would blast a shot that had goal written all over it but at the last second Logger keeper Alex Cleveland-Barrerra got a fist on the shot and deflected it to save the goal.

Onalaska then turned it around on the league Champions and attacked with seconds remaining. After a hard collision in the box and no call Ony’s Autumn Russ ran the loose ball down turned and fired a laser into the right side of the goal and Pirate keeper McKaela Meister had no chance in knocking it away and the underdog Loggers went to the break with a 1-0 lead.

In the 2nd half the Pirates clearly picked up their aggressiveness but Ony refused to give in. Adna did lose a couple of starters to injury the most serious an ankle injury to Presley Smith and had to be carried off the field in the 1st half and in the 2nd half a bout of bad leg cramps pulled Payton Aselton off the field. Despite several frantic attempts and an unbelievably long stoppage time gifted by the head official which we timed at more than 10-minutes the Pirates simply could not find the right combination to get the ball past Cleveland-Barrera.

Ony advances to State and the District Championship game on Saturday against Toledo at 12-noon. There will be a re-match of last year’s District Championship match featuring Adna and Kalama but this year it’s for 3rd place and the season is on the line with the winner going to State and the loser out. That match begins at 10am. The 2 teams faced each other one time this season and the Pirates came away with a 2-1 win. But with last night’s results it seemingly would be foolish to read anything into previous results.

Toledo 2, Life Christian 1
(Kalama, WA) The Indians came in with a 12-4 record while Life Christian was 4-12 but the Eagles would not allow the Indians to put the match away. Toledo took a 2-0 lead off of 2 goals from Marina Smith. Smith scored the first one in the 20th minute on an assist from Briza Gallegos and Toledo led 1-0 at the half.

In the 2nd half Smith scored again in the 60th to take a 2-0 lead and it looked like the Indians could cruise to the win with the insurance goal. Despite several close shots and a couple of the crossbar LC stayed in the game and then made it interesting with a goal late in the match in the 77th when Kimberly Ballard scored off an Elysse Loyola assist.

Toledo is now 12-4 and move on to the Semi-Finals on Tuesday against Kalama, Life Christian had their season come to an end.

The Thorbeckes Fitness Centers Players of the Game went to Marina Smith and Elysse Loyola.

Onalaska 1,  Napavine 0
(Kalama, WA) On paper this looked like the Ony Loggers would win with goals to spare. They had already played twice this year and Ony outscored the Tigers a combined 11-4, 5-2 and 6-2. But Post Season has 3 familiar distinctions in almost every sport and that is defenses tighten up, offenses become more conservative and officials swallow their whistles and let them play.

Napavine’s keeper Zaylii Orozco  was one of those who came to play and locked down the goal for Napavine. The Loggers attacked multiple times but Orozco would not give in until the 35th minute when Cierra Russd fired a long shot and Orozco knocked it down but it squirted away from her where Savannah Gifford punched it in for the 1st goal and what few expected would be the lone goal. Orozco and the back line held off the Logger attacks.

Meantime, Orozco’s counterpart Alex Cleveland-Barrera also did her part with the shut out win. The Logger keeper was perfect in goal and the defense simply didn’t give the Tigers many opportunities. Onalaska is now 11-4-1 on the year and will advance to face Adna in the Semi-Finals on Tuesday. Napavine’s season is now over.