WIAA Spring Championships: Which was the MOST Dominate or Impressive Performance? 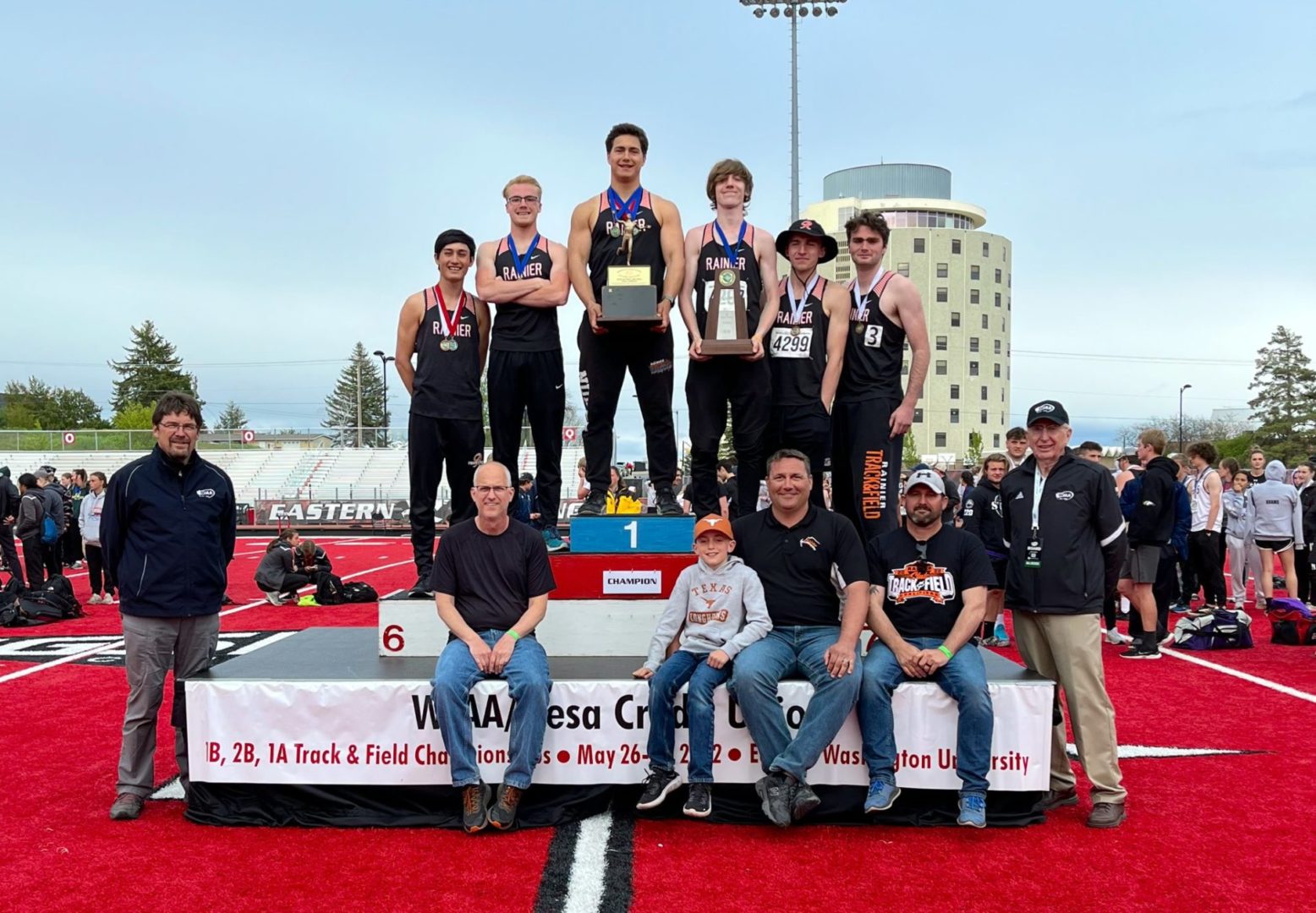 If you follow High school sports most are likely focused on one sport and likely one team and or athlete. But when you sit back and take in everything that occurred there are some really incredible performances from individuals to teams. We decided to ask the question that we believe is impossible to answer as we already have had many discussions both pro and con to potential answers. So, we want to hear from you.

The question is, which of the following performances is the most dominate and/or impressive out of all the Spring Championships? We give our feedback but we also want to hear from you. We do not allow commenting on our stories as a policy not to get caught up in negative banter but we are opening up the comment section below and welcome your thoughts and insights. Also, please suggest performances that are not included in our original assessment.

It is tough for us to come up with individual performances in team sports that we didn’t cover or easily could have missed others so we want to you to let us know if we missed a contender and we want your thoughts on which was the overall most Dominate/Impressive Performance of the Spring Championships.

Here are our nominees followed by some of our ESN crews own conclusions with their reasons. In no particular order we list our nominees with a brief description of why they were nominated.

The Titans rolled through the 12-team 2B State Fastpitch Tournament as the #3 seed coming in. PWV opened against #11 Toledo who upset #6 Okanogan in the play-in game. The Titans came out blazing with an 10-0 win in the quarterfinals. PWV then faced 10 seed Rainier who advanced by blasting the 2 seed Warden 10-2. The Titans weren’t impressed with that outcome and overwhelmed the Mounties 10-0. The in the State Championship game against one of their rivals the Adna Pirates the Titans were not ready to back down and blew out the #1 seed 11-0.

PWV outscored their opponents 31-0 in 3 games. They 10-runned each opponent in 5 innings and only played a total of 15 innings to win the Championship. Pe Ell pitcher Olivia Matlock hit 3 homeruns in the Semi-final and Championship game and pitched both games as well where she tallied double digit strikeouts thru the two games. She was also the league MVP during the regular season.

And finally, Head Coach Ken Olson had announced his retirement before the season and went out with a Title. It was the 2nd for the Pe Ell-Willapa Valley combination and Pe Ell had won 2 prior on their own. The last piece is that Olson won this Title while his team competed against the winningest Championship team in state fastpitch history Adna and his own Granddaughter played for the Pirates.

This is an unusual feat that the Islanders accomplished. They won the State 3a Baseball Championship, a 20-team tournament by first knocking off the 5 seed Bainbridge 8-0 then won their Regional 6-1 over 4th seed Auburn. In the Semi-finals the Islanders defeated the #1 seed West Seattle 3-1 and then took the Championship 8-4 over the 3 seed Kennewick. By the way, Mercer Island was the 12 seed…YES the 12 seed!

The Islanders had faced 5 straight loser out games before getting to the Championship showdown but they also played without one of their starting pitchers all season. Governor Aufranc injured himself skiing in January, including a broken leg and was lost for the season unless they made a deep run into the play-offs then there was a chance for him to get back. Aufranc made his one and only appearance in the bottom of the 7th inning with Mercer Island leading 8-4 and he struck out the final Lion to secure the State Championship.

Baseball was enough to be part of the discussion but how about we add the Islander Soccer team who also won the State 3A Championship. They topped the 20-team tournament by winning their opener 3-1 over the 5 seed Stadium then defeated 4 seed Lincoln of Seattle 2-1 in the quarterfinals to advance to Puyallup and the Final 4. In the Semi-finals the Islanders knocked off #8 Monroe 3-2 before taking out the 2 seed Lakeside 3-1 for the Championship. Oh by the way, the Mercer Island soccer team was ALSO the 12 seed!

Nominee #3: Lake Washington Fastpitch
The Kangaroos were simply dominate in their run through the 20-team Fastpitch tournament in Lacey where it poured down rain both days and day 1 got so behind schedule the 8pm scheduled games were beginning after 10pm and it rained all day on day 2.

The 2 seeded Kangaroos did not let the weather slow down their offense as they plated 51 runs over the 4 game run. They began with a 17-2 trouncing over the 15 seed then defeated the 10 seed by 10, 11-1 to move into the Semi-finals. They handled the 3 seed Roosevelt 9-1 and then cruised over the #1 seeded Walla Walla Blue Devils 14-8 for the Championship. The Kangaroos outscored their opponents in dominating fashion 51-12.

Nominee #4: Emersyn Walker Girls Golf Charles Wright Academy
Emersyn Walker dominated the 1A Girls Golf tournament at Indian Canyon Golf course in Spokane where she faced 59 other competitors. Walker shot a 3 over par 75 on day 1 and was the leader in the clubhouse with the 2nd low score of an 84 to lead by 9 strokes.

The T-Birds came out of the difficult District 4 into the state tournament as the 6 seed after losing to WF West in the District Championship. The T-Birds began on Friday with a blow-out win over the 11 seed 18-0. The T-Birds then got 3rd seeded Lynden in which they took the lead were tied up late in the game and came back to score 2 more to win 5-3 to advance to the semi-finals against their friends from WF West, the 2 seed.

The 2 teams battled and had to go to extra innings where Tumwater came up with another 5-3 win advancing the T-Birds to the State Championship game against the top seed Othello. Tumwater finished the sweep of the 1-2-3 seeds with an explosive 13-3 win when it counted most.

Nominee #7: Josie McLaughlin St George’s Girls Track
Josie McLaughlin competed in 3 events winning all 3 and helping to propel the Dragons to the 2B girls Championship. St George’s was also the only state Champion for either girls or boys to score more than 100 team points racking up an impressive 113.

McLaughlin won 2 running events taking the 1600 by nearly 4 seconds and winning the 800 by an eye popping 8 seconds. McLaughlin was also part of the 4×400 relay team and ran the anchor of the Championship run winning by nearly 6 seconds.

The Storm were overlooked in the seeding and was assigned the 6 seed and apparently it annoyed them as they took out their frustration on each team they took on. In the opening round they blanked the 11 seed Fife 4-0. In the quarterfinals another shut out with a 2-0 win over the 3 seed West Valley from Yakima. This pushed the Storm into the Final 4 and in the Semi-final they had to go to extra time to knock out the 2 seed Sammamish 3-2 but avoided going to a shoot-out.

Then in the Championship round Squalicum jumped all over the 4 seed Burlington-Edison and won it 5-0. This is the equivalent of a 35-0 win in a football championship game, a dominating performance. The Storm outscored their opponents 14-2 with 3 shut-outs as the 6 seed.

Nominee #9: Phillip Deaton Bellarmine Prep Tennis Singles
Phillip Deaton swept through the 4A singles tournament getting better and more dominant as the tournament wore on. In Deaton’s opening match he beat Ben Lee of Jackson 6-2, 6-2. Lee would end up giving Deaton his toughest contest. In the quarterfinals Deaton faced Henry Preacher from West Valley Yakima and took the 1st set 6-2. This would be the last time Deaton lost a game and finished off Preacher 6-0.

As Deaton moved on to the Semi-final he was at the top of his game shutting out Tommy James of Camas 6-0, 6-0 advancing to the State Championship match against Henry Park also from Jackson High School. Deaton continued to fire darts and won the Championship in straight sets 6-0, 6-0. Deaton led the Lions to a tie for 3rd in the team standings. 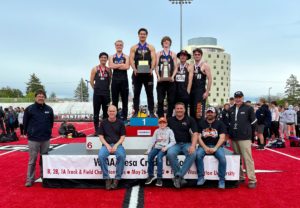 Nubbe’s specialty is the discus, and he did not disappoint flinging the oversized frisbee 203-07 blasting the state meet record by more than 8 feet. His toss was also exactly 50-feet longer than the 2nd place toss from Logan Martin of Coupeville. Nubbe’s throw would have won any of the other 5 track meets with the closest being from the 3a meet where Hermiston’s Caden Hoffman won with a toss of 169-03 or 34 feet shorter of Nubbe’s toss.

Nubbe also won the 2B Shot put with a PR throw of 56-10 which is also a new 2B meet record by nearly 5-inches. His throw in the shot also would have won in all the other meets as well except for the 3A where Brayden Platt threw over 61-feet. Nubbe throws the Javelin but mostly only in meets and placed 2nd.

In total Nubbe totaled 28 points for the Mountaineers team score of 67 which was enough for Rainier to win the boys Track team Championship which is also the 1st ever team State Championship in Rainier High school’s 113 year history.

Okay so there are our nominees for the most dominate and/or impressive performance of the 2022 Spring Championships. Below some of our ESN crew members have chimed in on their top 3 selections and we’d like to hear from you in the comment section of this story. Also, if there are other performances you believe are worthy of consideration, please let us know of other worthy achievements that belong in this debate.

1.  Jeremiah Nubbe for the performance and historical significance for his school as well. A once in a lifetime athlete.
2.  Emerson Walker dominating performance to be that far ahead of everyone else is astounding.
3.  Pe ell-Willapa Valley. To go thru a state tournament and not allow a run is incredible and to win for a long time coach that is retiring is great too.