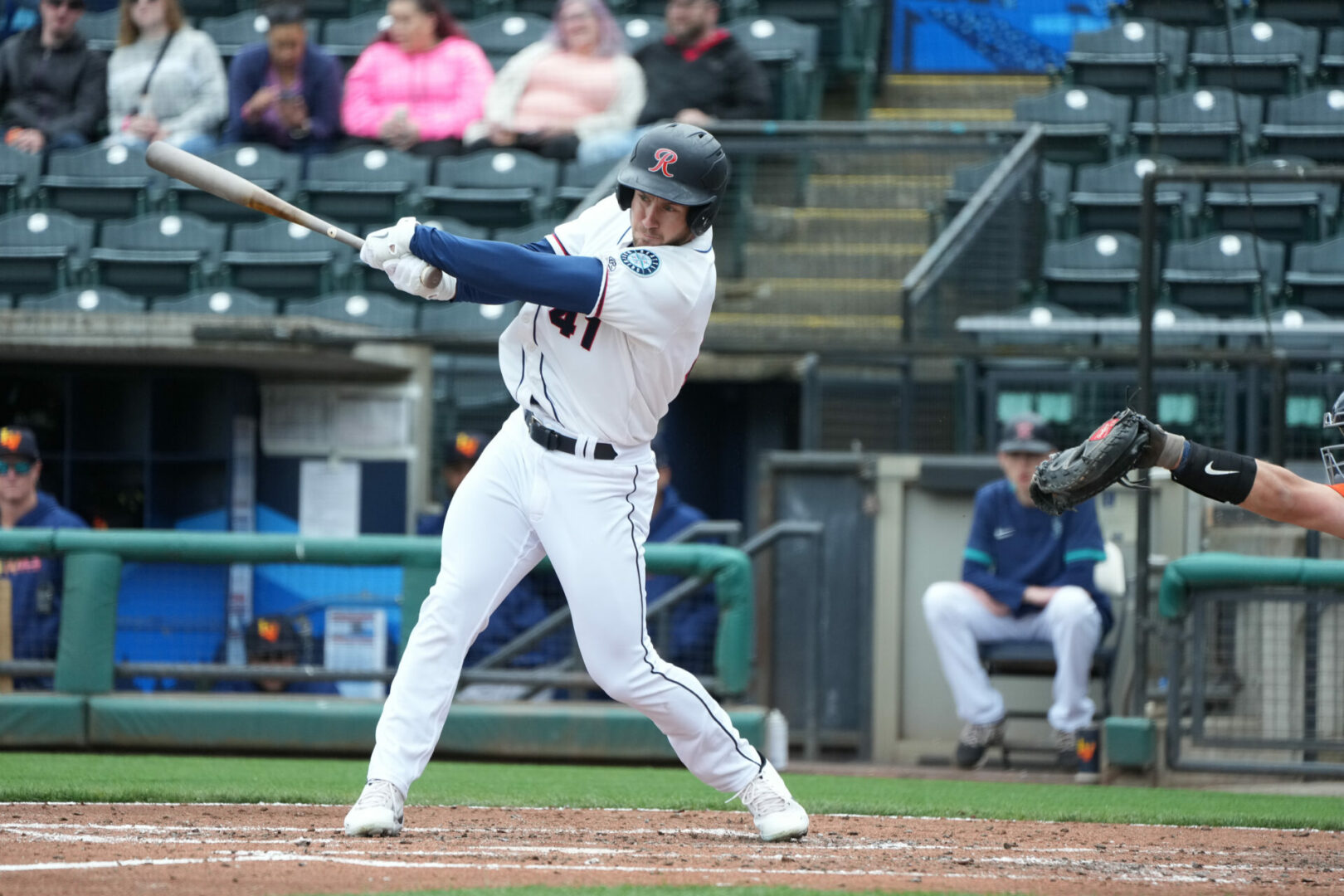 (Tacoma, WA) After scoring just one run on Wednesday in an 8-1 loss, The Tacoma Rainiers got the bats going on Thursday night, ending a 5-game losing skid, defeating the Pacific Coast League leading Oklahoma City Dodgers 8-5 at Cheney Stadium.

The Rainiers struck first in the bottom of the 3rd inning when Drew Ellis delivered a sacrifice fly to left field that scored Alex Blandino. Jarred Kelenic added an RBI double on a deep line drive to left field, scoring Forrest Wall to make it 2-0 Tacoma. The Rainiers kept the runs coming in the 4th, as Mason McCoy got his 8th home run of the season, a 2-run shot that scored Joe Odom to increase the lead to 4-0. Tacoma was not finished in the 4th however, as former Tampa Bay Rays infielder Kevin Padlo got a 2-RBI single off of Dodgers reliever Mark Washington to push it to a 6-0 lead.

Darren McCaughan had a strong outing on the mound for the Rainiers, as the Long Beach, CA native kept the explosive bats of OKC at bay, pitching 4 scoreless innings to start the game until he gave up a 2 RBI double to Miguel Vargas to cut the lead to 6-2.

Tacoma continued to add to their lead in the bottom of the 6th as they scored on a wild pitch off reliever Dellin Betances, Alex Blandino scored making it 7-2. The Rainiers scored their final run on the next at bat on a sacrifice fly by Padlo, his 3rd RBI of the game. OKC tried to mount a comeback late by scoring 3 runs helped by a Jason Martin 2-run homerun in the 8th. Then the Dodgers got one more in the 9th before Matt Koch closed the door and got the save for Tacoma.

It was a big night for Kelenic at the plate, getting 3 hits and an RBI. The former 6th overall draft pick in the 2018 MLB Draft is now batting .301 and 35 RBI since the Mariners sent him to Tacoma on May 13.

McCaughan got his first win for Tacoma since June 15th to improve his record to 6-5, throwing 6 innings and giving up just 2 runs on 6 hits and striking out 4. His best season since he went 7-5 at Double-A Arkansas in the Texas League.

Michael Grove took the loss to fall to 0-2 on the season; the 2018 2nd round draft pick for the Dodgers went just 2 1/3 innings and allowed 2 runs on 3 hits. It was the first appearance for the Wheeling, WV native since June 29th after being placed on the IL due to an undisclosed injury.

After losing the first two games of the series against the Dodgers earlier this week, The Rainiers got the win on Thursday to improve to 36-50, the Dodgers fell to 51-36. The Rainiers also improved to 26-14 on the season when scoring first.

The Rainiers will try to even up the series with OKC on Friday night, sending Justus Sheffield to the mound to face Sam Gagvgilio of the Dodgers. First pitch is slated for 7:05 at Cheney Stadium.