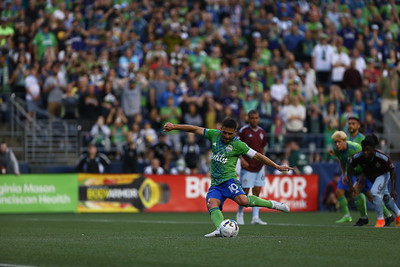 (Seattle, WA) It wasn’t the start the Seattle Sounders were looking for on Saturday night, but they earned a crucial 3 points after defeating the Colorado Rapids 2-1 at Lumen Field in an MLS Western Conference matchup.

Seattle started the game dominating possession when the Rapids struck gold in the opening minutes, with a Jonathan Lewis goal assisted by Diego Rubio to give Colorado a 1-0 lead just 3-minutes into the match.

The Sounders, much like their last home game, a match against rival Portland, had plenty of chances after falling behind. At the 16-minute mark, Sounders Captain and Uruguayan  Midfielder Nicolas Lodeiro fired a shot over the goal, which was the best scoring opportunity for Seattle at that point.

Sounders continued to dominate possession and get into the attacking third; Jordan Morris had a header that Rapids Goalkeeper William Yarbrough calmly saved to keep it 1-0. The Mercer Island, WA native Morris continued to get quality chances, this time in the 35th minute when he took a long pass, made a great first touch and took another shot that Yarbrough saved. It was only a matter of time that the Sounders would break through, and  it came in the 43rd when Morris scored his 6th goal of the season. The goal was set up after Seattle won a free kick near mid-field, and Lodeiro made a brilliant heads up play to take it quickly and found Midfielder Jimmy Medranda, who passed it to Morris who made an overlapping run and beat Yarbrough to tie it at 1-1. Colorado complained heavily, saying that the free kick was taken too far up pitch. The call stood and It was the 6th goal of the season for Morris, helping the Sounders tie the match at half-time.

Adversity hit Seattle early in the 2nd half, as the Sounders found themselves down to 10-men in the 47th minute on the 2nd yellow card for Midfielder Kelyn Rowe.

The Sounders rose to the occasion as they took the lead in the 69th minute when Midfielder Albert Rusnak passed to Morris who fired a shot from the left side, he followed up the rebound and was tripped by Colorado Goalkeeper Yarbrough. Lodeiro took the penalty and beat Yarbrough to the right side to make it 2-1.

For the rest of the match, Seattle continued to get into the attack and maintain possession to earn the 2-1 victory and end a 3-game losing skid, and 2 game losing streak at Lumen Field. It also ended a 343-minute scoreless streak. The Sounders outshot the Rapids 17-8 and 8-3 on shots on goal. Seattle also dominated possession, 55% to Colorado’s 45%. The loss for the Rapids ended a 3-game unbeaten streak pushed their winless streak in road games this season to 7-games.

Sounders hit the road to face Western Conference leading LAFC on Friday before coming back home to Lumen Field on Tue, Aug. 2nd against FC Dallas.