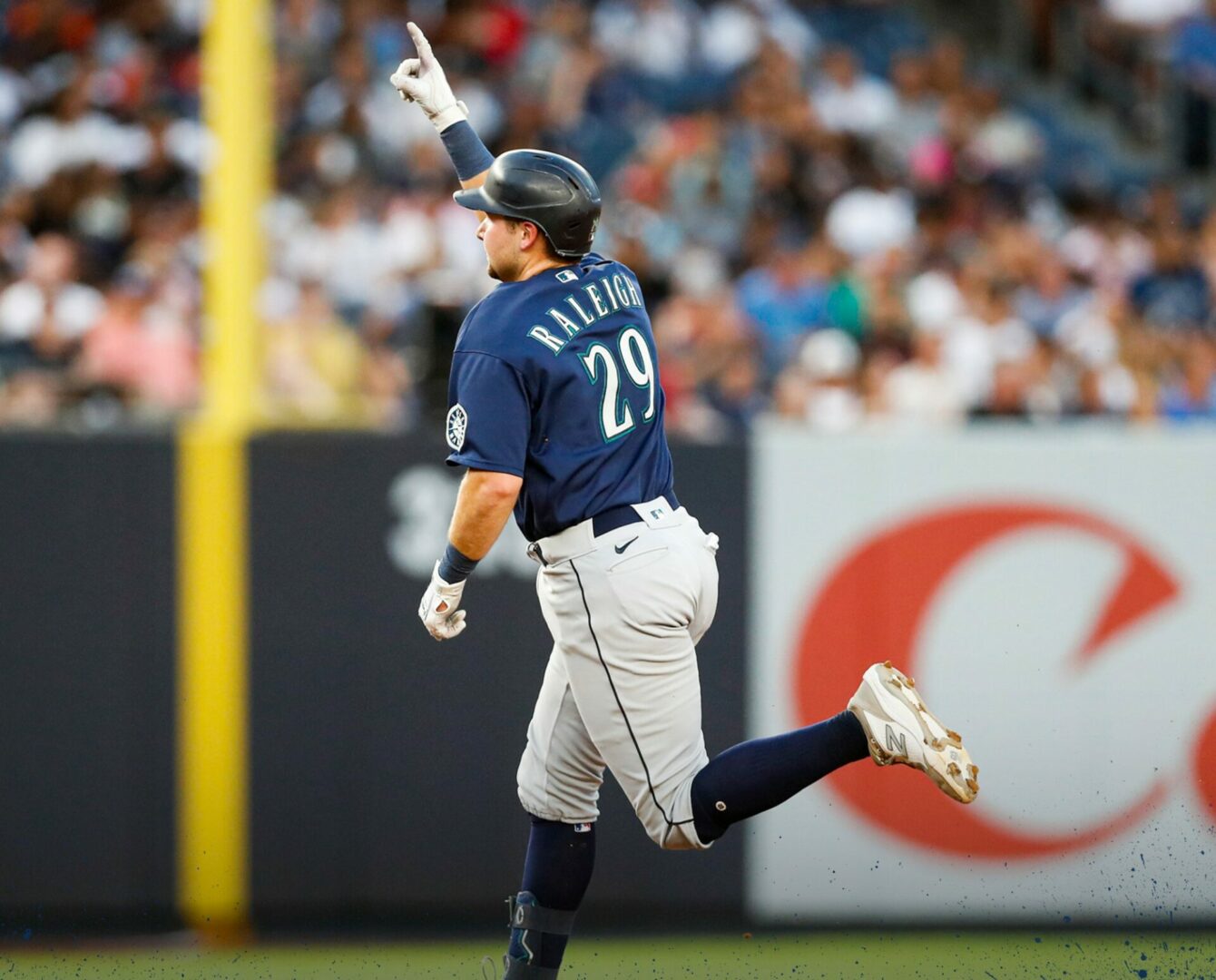 In boxing there are fighters that just have more power and hit harder than others. But those other fighters can still win by surviving the onslaught and wearing down the opponent. That is exactly what the Seattle Mariners did on Tuesday as they survived the power of the New York Yankees and earned a hard fought 8-6 victory.

The Yankees entered the series with the best record in baseball and one of the most intimidating lineups in baseball. Both teams would have pitchers on the mound with 10 wins this season and good ERAs. Logan Gilbert and Jameson Taillon were prepared for a pitcher’s duel. The result would actually turn out to be a slugfest.

Seattle would strike first and it would be early. After a very brief rain delay of only ten minutes, Jesse Winker would draw a one out walk. Eugenio Suarez would then hit his first home run since July 13th in Washington. The long shot to left was his 17th of the season and gave the Mariners a 2-0 lead.

In the 2nd, Cal Raleigh would look to get in on the fun. Raleigh would draw even with Will Smith of the Los Angeles Dodgers for most home runs by a catcher in 2022 with his 15th of the season. The solo blast to deep center extended the Seattle lead to 3-0.

One area the Mariners are better than the Yankees is in defense. The Mariners have the best fielding percentage in all of baseball but the Yankees are still in the top five. That wasn’t on display in the 3rd. With Adam Frazier on second and one out, Suarez would hit a grounder to Josh Donaldson at third. Donaldson would airmail the throw to first allowing Suarez to reach and put runners on the corners. Veteran first baseman Carlos Santana then hit a deep fly ball to left for a sacrifice fly to score Frazier and make it 4-0 Mariners.

Logan Gilbert would use a pickoff move to get out of trouble in the 3rd but would have no such luck in the 4th. Josh Donaldson would make up for the error with an RBI double to put the Yankees on the board. Later that inning, the Yankees own catcher would leave the yard as Jose Trivino hit his 10th home run of the year and third of the series to make it 4-3.

The Mariners got some breathing room in the 5th. After a couple walks to Frazier and Suarez, Jameson Taillon was relieved by former Mariner Lucas Luetge. It wouldn’t work the way Yankee manager Aaron Boone had hoped as Carlos Santana would hit one off the wall in left to score both runners and make it 6-3 but was thrown out trying to advance to third on the throw to the plate.

The 6th inning is where things really unraveled for the young Mariner star pitcher. Gilbert would give up a leadoff home run by Anthony Rizzo for his 27th of the season to make it 6-4. After a Matt Carpenter single, Josh Donaldson would once again do some damage with a two-run shot for his 10th of the season. The Yankees scored three runs with just three batters in the 6th and the score was tied at 6-6.

After Penn Murfee got a big double play to get out of trouble to end the 6th, the Mariners needed to light a spark in their bats. Manager Scott Servais would hope Sam Haggerty could light that spark and used Haggerty as a pinch-hitter for Jarred Kelenic. The move worked perfectly as Haggerty lined a 1-0 pitch over the wall in left for his third home run of the season. After Haggerty sprinted around the bases instead of a nice leisurely trot, the Mariners were back on top 7-6.

The bullpen was stellar for the M’s as Paul Sewald pitched against the top of the order in the 7th and threw a 1-2-3 inning against DJ LeMahieu, Aaron Judge, and Anthony Rizzo with strikeouts of Judge and Rizzo. Erik Swanson and Matt Brash combined to pitch around a walk and a couple of wild pitches in the 8th to leave the tying run stranded at third after a big strikeout by Brash of Trevino.

Seattle got some insurance in the 9th and once again it started with Haggerty. An infield single by Haggerty and then a wild pitch had a runner on second with one out and the top of the order up. Adam Frazier stayed red hot with a soft line drive just over the glove of second baseman DJ LeMahieu and Haggerty scored easily to make it 8-6.

It would be up to Andres Muñoz to finish off a big win and it looked like it would be easy as he struck out Isiah Kiner-Falefa and Aaron Hicks for a quick two outs. A two out single by LeMahieu would extend the game. Muñoz then completely lost control of his slider. He would walk both Aaron Judge and Anthony Rizzo on a combined nine pitches to load the bases and put the winning run on first. Gleyber Torres would pinch-hit for New York looking to break the hearts of Mariner fans. Muñoz was able to locate the slider and strikeout Torres to end the game with some drama and give the Mariners the 8-6 win.

Seattle (56-49) capitalized on the Tampa Bay Rays loss and now sit in sole possession of the second wild card spot. Luis Castillo (4-4, 2.86 ERA) will make his Mariners debut in the series finale on Wednesday at 10a. The Yankees (70-35) will counter with former Cy Young winner Gerrit Cole (9-3, 3.30 ERA) in the rubber game which is expected to be a thrilling pitcher’s duel.