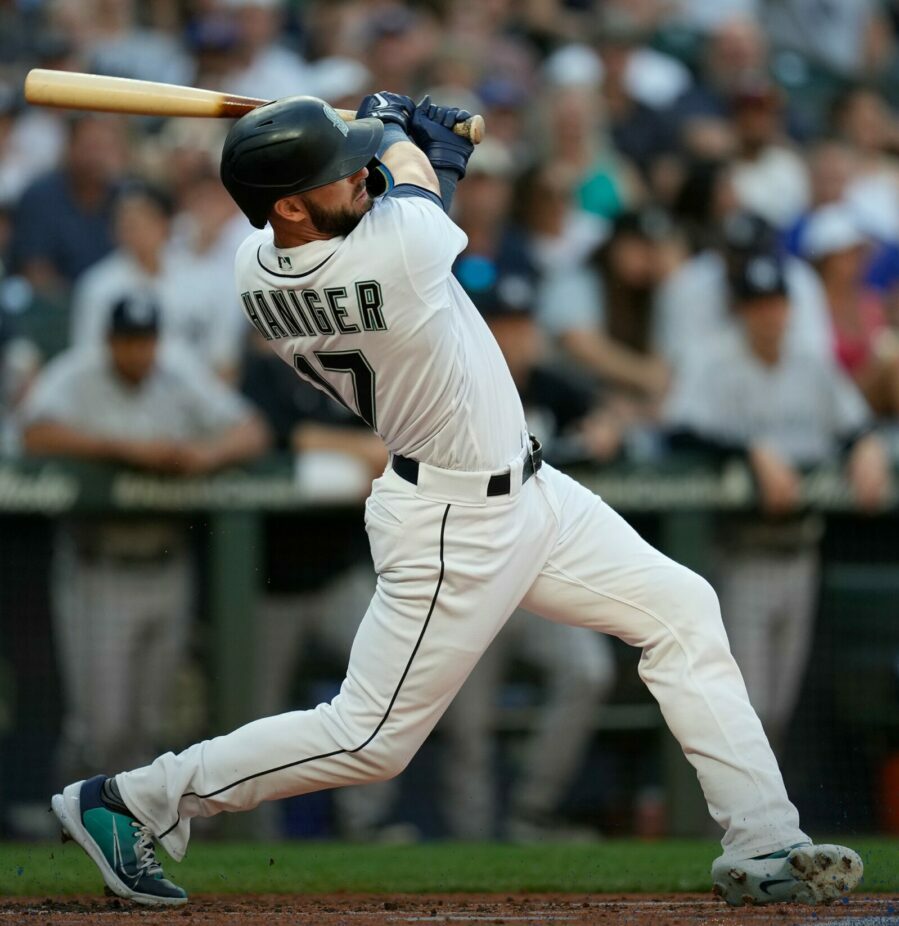 One thing that we have learned this season is that sometimes a team is just going to have success against a starting pitcher regardless of how good that pitcher is. We saw it with Robbie Ray against Houston and now we are seeing it with Logan Gilbert against the New York Yankees. The Bronx Bombers got to the young Mariner star once again on Monday as Seattle fell in the opener to New York 9-4.

The offense was able to get Gilbert off the hook last week in the win in New York. The bad news was that Jameson Taillon was much better for the Yankees this time around and Gilbert was actually worse. With runners on second and third in the top of the 1st, Josh Donaldson would hit a grounder passed J.P. Crawford and into left center. That would score both DJ LeMahieu and Aaron Judge to give the Yankees a 2-0 lead.

Due to a lack of coverage this week because I was extremely under the weather, we missed the return of Mitch Haniger to the Mariner lineup for the first time since April 29th. He had a couple good at bats over the weekend but not like he had in the 1st inning on Monday. Haniger would crush his fourth home run of the season to put the Mariners on the board and make it 2-1. The home run was Haniger’s 100th home run in his Mariners career and became the 15th player in franchise history to do so.

The big, bad Yankees would strike back in the 3rd. The damage would come off the bat of Josh Donaldson once again as the Yankee third baseman hit his 11th home run of the season on a no-doubter to left. Two batters later, Andrew Benintendi would drive in another run on an RBI double to make it 4-1 Yankees.

The Mariners would have a big threat in the 4th. After a single by Mitch Haniger, who had two of the Mariners three hits off of Taillon, both Eugenio Suarez and Carlos Santana would draw two-out walks to load the bases for J.P. Crawford. The Mariner shortstop put together one of the best at bats of his career with an 11 pitch walk to score another run and make it 4-2. Cal Raleigh would then launch what looked like a grand slam but it drifted foul and broke the hearts of many at T-Mobile Park. Raleigh would then groundout to end the threat.

Things unraveled for the M’s in the top of the 5th. The Yankees would hit three straight doubles by Donaldson, Gleyber Torres, and Andrew Benintendi to make it 6-2 Yankees and end the day of Logan Gilbert. Even worse news was that during the pitching change, Jesse Winker would leave the game as well with back spasms. The writing was on the wall for the Mariners.

Down 7-2 in the 7th, Cal Raleigh decided he still wanted that home run that he had just missed earlier. The Mariners catcher would launch his 16th home run of the season to cut the deficit back down to 7-3.

That would be the closest they got. Both teams would score in the 9th as Aaron Judge hit his league leading 44th home run of the season and Jose Trivino would drive in another run with an RBI single. Sam Haggerty would knock one in for the Mariners with a single but Seattle would fall by a final score of 9-4.

Seattle (59-52) now sit in the final Wild Card spot in the American League only one game ahead of the Baltimore Orioles. The Yankees (71-39) are in a very comfortable spot after snapping their five-game losing streak as they are 10.5 games ahead of the Toronto Blue Jays in the AL East. The teams will meet on Tuesday in game two of the series at 7:10p as Luis Castillo (5-4, 2.95 ERA) makes his Mariner home debut against Gerrit Cole (9-4, 3.56 ERA) who looks to bounce back after giving up six runs in the first inning against the Mariners last Wednesday.