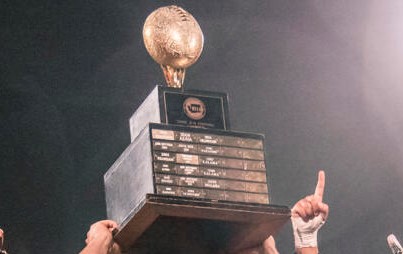 The WIAA has been searching for a permanent replacement site for the Football State Championships since leaving the Tacoma Dome. For those who don’t know why they left the Tacoma Dome, after a re-model the seating does not work with as many as the first 15 rows on each side unable to see the entire field and a 30 foot drop from the front row to a very slender sideline where the team sideline is located. Additionally a large investment was going to be needed to replace the turf that had worn thin. Those two issues made the Tacoma Dome not suitable for Championship Football.

The last 2 Championships in 2019 and 2021 (2020 was covid year) were held at Sparks Stadium in Puyallup, Mt Tahoma High school and Harry Lang Stadium at Clover Park High School. Each facility hosted 2 games and all were played at 12p and 4p on the 1st Saturday of December. Under the single facility system at the Tacoma Dome 2 of the Championships were played on Friday at 4p and 7p and the other 4 played the following day on Saturday at 10a, 1p, 4p and 7p.

There has been a split on wanting to go back to a large facility to highlight the Championships like the University of Washington or Lumen Field where the Seahawks play. Others like the current system where the stands are packed and there is more of an electric atmosphere and not thousands of empty seats like you will get at the UW or at Lumen. WIAA Executive Director Mick Hoffman says the Football Coaches Association is also split on what is best.

The WIAA reached out to both the UW and Lumen Field and the Seahawks to seek bids on the cost of hosting the 6 Championship games. The University of Washington did offer a bid that was simply too much for the WIAA and included some issues that the WIAA would need to get some feed back on.

ESN talked with Hoffman and assistant Executive Director Andy Barnes who has led the talks for the WIAA. Both Hoffman and Barnes stated first that the U-W really wanted to find a way to make it work and worked very well with the WIAA to find a path forward. Barnes says he is optimistic that further positive negotiations will be had but it’s late in the game for this season and the WIAA executive board needed to make a decision for this season.

The biggest issue is cost as the U-W’s bid was 6-times the cost of the current system using the three stadiums, Sparks, Mt Tahoma and Harry Lang. The Seahawks and Lumen field did not offer a bid other than to say their bid would have been more than the U-W’s.

Other than cost the issues that need to be worked out were the requirement to play only 3 games in a day so 3 games each on Friday and Saturday. This puts schools, parents and fans right in the middle of Seattle traffic on both days. This also would mean paying a premium for parking, the stadiums would have control of the concessions as well so those prices will be more expensive. Hoffman says they are doing their best to keep the ticket prices as low as possible but with the added expenses of parking and much higher concession prices would significantly add to the cost of an individual and family experience.

Hoffman also said best case scenario there still would be only 2 locker rooms available and in Lumen field likely only 1 as the Seahawks locker room would not be available. This means some significant shuffling of teams when they are on the field playing the 2nd half and the next two teams who need to dress and get ready to play their game.

One of the bigger issues that nothing can be done about but has caused part of the big split on playing in the big stadium or the smaller seated facilities is seating. Hoffman says they average about 16,000 total fans adding up all 6 State Championship games. So even if all 16,000 showed up and sat there to watch all 6 games over both days means a lot of empty seats. Husky Stadium has a seating capacity of 70,000 so a minimum of 54,000 empty seats. Lumen Field has 72,000 so a minimum of 56,000 empty seats. Realistically you are gonna have 62 to 68,000 empty seats depending on the match-ups and classifications.

Additionally at Lumen field there is a requirement that fans all sit on one side and down low which means no cover for any of the fans. Husky Stadium was a little more flexible but still most of the seating would be uncovered. Those opposed to the large stadiums say these type of atmosphere’s don’t bode well for a Championship experience. Those in favor of the big stadium believe the opportunity to play on one of those fields make up for what would be a mostly empty stadium.

The Tacoma Dome’s max capacity is listed at 23,000 and was much less for football and they had 4 locker rooms that made the transition between games much easier. But again the re-model made the games virtually unwatchable plus the Dome made it clear they were going in a different direction nit worried about accommodating for sports but rather wanting to attract more concerts, conventions and trade shows.

Hoffman says he knows there were a few issues last year with some of the teams not being accommodated enough after finishing a big season. Hoffman says they recognize the shortfalls and are working with the coaches association to make sure they can provide what each school would like to have available. Hoffman understands the need for a space for teams to get together and share one final moment following a long season and especially those who fall short in the Championship game. Barnes added the other good thing about the current system is if two Eastern Washington teams make it to the State Championship the two schools will have the option to play that game in Eastern Washington at a stadium much closer to their fans.

Both Hoffman and Barnes said they are committed to continuing talks with all parties and believe it is likely only the U-W will be in play as the Seahawks did not offer a bid and did say they would be open to supporting the U-W proposal. Hoffman says they do need to get feedback especially from the coaches association about the time schedule and days and some feedback from fans and families of the additional costs concerning parking and high concession prices.

Hoffman says they are also continuing to look at potential other options such as Memorial Stadium in downtown Seattle. There is a proposal the City of Seattle is going to re-model and update the aging stadium and Hoffman says that potentially could be an answer. Other proposals around the state will also be looked at but for at least this season it will be the same locations hosting the same classifications unless two Eastern Washington schools face off then a 4th venue could be added.

Both Hoffman and Barnes said they will continue to talk to the stake holders and listen to fans as they try to find a permanent solution to host the State Football Championships.